In our current day and age (does that phrasing make me sound old?) most of us have far too many demands on our time. Jobs, family, friends, the Internet… the list goes on and on.

For some people, there are just too many things, and something has to give way. When one is trying to make a living and make something better of their life, there might not be time for the Internet. Or for TV or reading.

Or, in some cases, for a relationship. A relationship takes time and effort to make it work, and some people feel unable or unwilling to put that much time into it. Instead they choose one-night stands, fuck-buddies, or friends-with-benefits so they can have a sexual connection without the added time and energy of maintaining a relationship.

The main character of my new male/male novella Whatever He Wants, Randall, is a working grad student who has devoted his life to school and his job. And, on occasion, to indulging his sex drive by hooking up with people he meets in class, at work, or at parties. Randall calls himself the “king of one night stands,” and his motto is “Get in, get off, and get out.” With all the other demands on his time, Randall doesn’t want the complications and added stress of a relationship.

That is, until he meets Isaiah. At first, when he and Isaiah start chatting at a party, Randall thinks of the other guy as just another one-night stand. However, Randall quickly realizes he wants more.

But Isaiah is aware of Randall’s reputation, and wants to show him what it feels like to be played. At the end of the night he walks away, and Randall doesn’t know whether he’ll ever see him again.

Whatever He Wants was released December 4 from Ellora’s Cave, http://www.ellorascave.com/whatever-he-wants.html, and is also available on third-party retail sites.

Here’s the blurb and a short excerpt from Whatever He Wants:

Grad student Randall has a reputation to uphold. He’s too busy to fall in love, and is known among his friends as the king of one-night stands. He prefers it that way until he meets Isaiah at a party.

Against all of Randall’s expectations, Isaiah turns out to be exactly what he’s looking for, and for the first time Randall’s heart gets involved. Randall doesn’t know whether Isaiah is truly interested in him or just playing the player, but to find out, Randall will do whatever Isaiah wants. 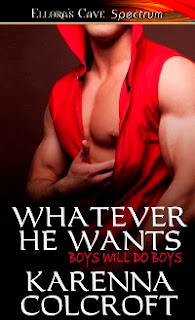 Isaiah ended up eating only half his meal. He kept exchanging heated looks with Randall until Randall could barely stand it, and apparently Isaiah was just as turned-on. He shoved his plate away and tossed some cash on the table. “I’ve got yours. Let’s go.”
“Where?” Randall asked.
“Your place.” Isaiah smiled. “I want to see your bed.”
Randall grabbed him by the jacket and dragged him outside. Isaiah laughed the entire way to Randall’s apartment.
The second they were inside, before Randall even managed to speak Isaiah pinned him against the door, holding Randall’s hands to his sides. He crushed his mouth hard against Randall’s, teeth and tongues colliding so forcefully it hurt. Randall didn’t give a shit. He was here with Isaiah. With Isaiah’s body against his, cocks rubbing together through their jeans, heat building between them until he thought he would burst into flames.
And that was just a goddamn kiss.
Isaiah broke the kiss but stayed against Randall. “Do you feel how hard I am, baby?”
“Yeah.” Randall tried to pull a hand free to cup the pleasing bulge between them but Isaiah tightened his grip. “I want to touch you.”
“I’ve been this hard for you all week,” Isaiah growled. “All fucking week all I’ve thought about was plowing into your tight little ass and stroking your cock and making you scream. I jerked off so much I was almost raw and it wasn’t enough.”
“Because it wasn’t me,” Randall said. He was elated. Isaiah had suffered just as much as he had. Had wanted him just as much. He hadn’t been the only one to have a miserable week, and now they were going to make up for it.
“Because it wasn’t you,” Isaiah agreed. “What about you? Did you play with yourself while you thought about me? Did you come so hard you saw stars while you dreamed about having me play with your dick? Tell me, baby. Tell me how bad you missed me.”
Such intense arousal rushed through Randall that he almost wasn’t able to collect himself enough to speak. “Bad,” he blurted. “So, so bad. I stroked off every day. Saw you. Your eyes. Your hair. Your hands and cock. All about you and you weren’t here and I wanted to fucking kill you.”
“We really did a number on each other.” Isaiah let go of him and stepped back. “You only wanted a one-night stand last week before we hooked up, didn’t you?”
“Get in, get off, get out.” Randall took a deep breath and adjusted his painfully hard cock inside his pants. “The usual when I go to parties. But it wasn’t enough. I knew that before you even started to fuck me. I knew I wanted more. I wanted longer.”
“So did I.”
Isaiah stepped forward and touched his lips to Randall’s again. This kiss was a stark contrast to the previous one. Gentle, not rough. Tender, not forceful. Full of emotions Randall had never imagined feeling, let alone admitting to, but they were all there bare and obvious. And mutual.
Posted by Beth D. Carter at 7:12 AM