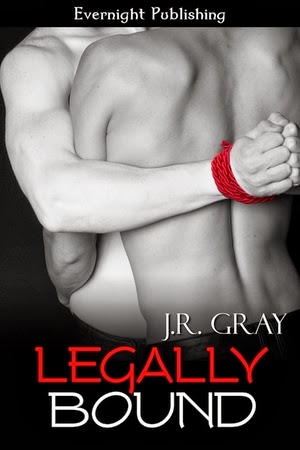 
Q: What inspired you to write Legally Bound?

This is actually a funny story. I was talking to a friend on tumblr, and she said she had this fantasy about a courtroom because she's a lawyer. The wheels in my head started turning, and I wrote Legally Bound. It also started off as a novella.

Q:  How much real life do you put into or influences your books?


I use a lot of real life in my books. It’s things like character traits to little things I pick up from people, and even my own feelings are redirected into plots.


Q: Is there any one (or more) author out there that has influenced your writing?

I think every book I connect with influences me. Writers and books inspire me. It’s the ones that give me feels, tear me up, or make me think about them long after I've put them down. Those kind of books inspire me because those are the feelings I want to leave with my readers. Recently, several books have inspired me: 'The Mistress' by Tiffany Reisz, 'Touch & Geaux' by Abigail Roux and 'Chasing the Prophecy' by Brandon Mull.

“Oh shit," Daniel said too loud, drawing the attention of the bailiff. He waved her off, muttering, “Nothing.”

“I fucked one of our cases last night,” he admitted, knowing his friend would get it out of him one way or another. There was no point fighting his partner’s excellent extraction skills.

“Which one?” he asked, looking over his shoulder, way too amused.

Daniel tried to nod subtly to one of the prisoners.

“You have to give me more than that.” The blond lawyer stood up and blatantly turned around to study the men sitting in the rows behind them.

Stiffening in his seat, he tried to keep his back to the man he had seen every naked inch of, as well as had his tongue buried inside of, till the early hours of the morning.

“Dark hair, about six foot, green eyes.” He tried to speak out of the corner of his mouth so no one could read his lips.

“What are you doing?” Daniel kept looking over his shoulder to see if the guy showed any signs of recognition .

“What’s his name?” His partner didn’t look up from the stack of files as he spoke.

“Rafael,” he whispered, face flushed at just saying his name. “What are you doing?”

“You’ll thank me later,” Jesse hummed, plucking out the file and flipping it open. “Oh, hot damn, you picked a good one.”

Daniel snatched it out of his partner’s hands, his eyes going wide. Life just got a little more interesting.
All through the arraignment hearing, he found it hard to keep his mind off the previous night spent at the defendant’s apartment. They’d had an instant connection. He groaned to himself as it became increasingly hard to focus.

“Who knows, but how many innocent men do we represent?” Daniel’s stomach knotted. He didn’t want the allegations to be true.

Bound, 1
The last thing Daniel, a hard-working public defender, expected to see the morning after a one night stand was his hook-up staring back at him from the wrong side of the law. Assigned to work his case, Daniel vows to keep things professional with Rafael but has a hard time controlling his craving for dominance, the control, and the connection they shared. Rafael, a paid Dominant in the Chicago underworld, has been dealing with a cop problem for far too long. Used to sex with no emotion, he’s entranced with Daniel’s submission, his innocence, and…could there be something more? Can Daniel clear Rafael's name, keeping him out of jail and in his life, with the odds, a cop, and the mounting evidence against them?


Author Bio/Links:
When not staying up all night writing, J.R Gray can be found basking in the warm glow of the Miami sun, or at the gym where it's half assumed Gray is a permanent resident. A dominant, pilot, and sword fighting enthusiast, Gray finds it hard to be in the passenger seat of any car. Gray frequently interrupts real life, including normal sleep patterns, to jot down nonsense. The bane of Gray's existence are commas, and even though it's been fully acknowledged they are necessary, they continue to baffle and bewilder.

booksbygray.tumblr.com
Posted by Beth D. Carter at 10:59 AM