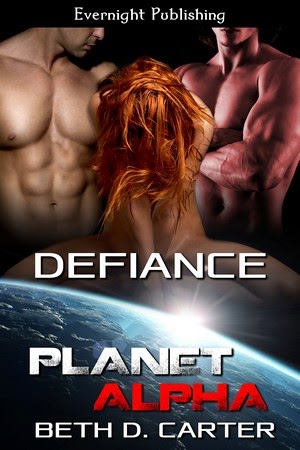 The cold of space has never been hotter.....


Jordan Kuper has lived her life in a human camp, hiding her gender for protection.  She knows how to fight and to take care of herself and her mother, but she is not prepared for the Xyran and human traitor who abduct her.

David Ballack and Laith have a plan and it involves taking a human female to the sex market.  But Jordan is a hell cat and doesn’t take kindly to being abducted.  She turns their lives upside down attempting to escape.

They are forced to stop for repairs and when Jordan finds a kidnapped Alphan girl, everything changes.  Now she has to get this little girl back to her parents, get herself back to Earth, and not fall in love with the two Xyrans who kidnapped her in the first place.

1. This story came to me in a dream.  I clearly envisioned Jordan in the camp, hiding her identity and the story grew from there.  Originally, it started out as having two Xyrans, but there were technical problems having two Xyran men on this particular mission, so I switched the Xryan Davil into the human David.

2. As I said, the first draft names had two Xyrans, and their names were Ten and Davil. There was a Jordan line that came to me, that I loved, but ultimately had to sacrifice:  "Great, I'm with a number and a demon."

3. There is a scene where she must fight her way out and save a little Alphan girl from the evil Xyrans, and the first go round had her breaking a chair over their heads (how cliched, eh?).  At the time, I was watching Fringe off Netflix and in one episode, the heroine kills one of her captors by making a so-called air gun from a bunch of machines.  So I thought I could "borrow" that idea.  Of course, I had to do a lot of research to see if that was even possible!  My editor loved the change and so that is how Jordan defeats her much stronger alien captors.

4.  In the original draft, Jordan is rescued by Alphan warriors after her escape with the Alphan child.  Here's the chilly reception that Davil (David) and Laith receive:

A beeping alert sounded through the ship and Davil groaned.  “I’m beginning to hate this ship.”
Davil hurried to the cockpit and a minute later Laith limped to his chair.
“We have Alphans heading toward us,” Davil told him.  “Probably a patrol.”
“Can you hail them?”
Davil tried to contact them but they didn’t respond.  “No.  They might be in a shoot now ask questions later type of mood.”
“All right.  Get us off here and pull back to neutral space.  We’ll contact the outpost directly.”
Seconds later, they lifted off the planet surface.  The entire time they tried to contact the Alphan outpost but all they got was silence.  Even as they came right to the edge of Alphan territory there was absolute silence.
“I don’t like this, Laith,” he muttered.
“Nor do I.”
Davil kept sending out hails until he began contemplating doing something really reckless like storming an fortified Alphan base.  And then finally, they got a response.  As the connection went through, a haughty Alphan stared coldly back.
“We’re looking for a human female named Jordan,” Laith said by way of a greeting.  “Perhaps you-”
“Jordan Kuper is no longer your concern,” the Alphan stated coldly.
“Excuse me?” Davil demanded.  His blood ran cold at the thought that something happened to her.  He began to doubt the idea of letting her go off on her own.
“As compensation for her brave return of the Alphan child, her request to go back to Earth has been granted.  If you try to enter Alphan territory again, you will be gunned down.”
The viewscreen blinked out, leaving Davil and Laith staring at it in shock.
“What shall we do, Laith?”
“We’re going to get our mate back,” Laith said, a promise in his voice.

Where to Buy Defiance:
http://www.evernightpublishing.com/defiance-by-beth-d-carter/