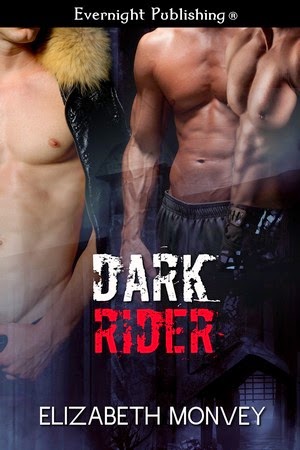 Welcome to Elizabeth Monvey!  Thank you so much for visiting Written Butterfly again!  You're no stranger to the questions!

I love questions!  Especially when I can blab about my favorite thing...my stories!  So thank you for giving me an opportunity to promote my book, Dark Rider.  Perhaps you can come visit my brand new blog soon!

This story was originally part of a larger fantasy book I wrote some time ago.  The character names were all different too.  I took this part of the book and tried to modify it for Evernight's Planet Alpha series, but they said no thanks.  They did, however, want me to convert it back to the fantasy story and offered me a contract based on the original material.  Maybe later on I can use the other half of that book.

I have to be clear headed.  If I'm angry, or upset, or hungry, or distracted by a television show, then I can't focus.  So I listen to instrumental music.  Presently, I'm on a Celtic Music kick.

I have the next book in the "My Boyfriend Is..." series being released next week!  This one is called "My Vampire Boyfriend".  After that will be "My Alien Boyfriend".  Presently, I'm writing the next in that series.

When Lord Hark is stabbed, his uncle, the Govenor of Eyvindar, hires a Mercenary to protect his heir.  Hark resents having a babysitter but when he meets Cax he’s unprepared for the spark of attraction between them.

Alisander has been by Hark’s side almost his whole life.  He is in love with him, but when he meets Cax he sees a future away from the servant life he’s been confined to.

They are from different aspects in life but manage to find love.  Yet they need to discover the threat moving in on Hark, before it’s too late.

“If you keep staring at me,” Cax muttered to him, “I’m going to have to hurt you.”
Alisander grinned. “New to Eyvindar, eh?”
“Does it matter if I am?”
“Passing through?”
Cax finished his drink and rose from the bar. "Poro," he called out, ignoring Alisander. "I'll take a room for the night."
The barkeep came over and held out his hand for the coin, which Cax gave him without counting. He figured it was enough when Poro beamed and gave him a quick nod. "Don't worry about a thing, Cax. You come back when you want. The room is waiting for you." He jerked his head to a corner. "Up the stairs, first door on the right."
Cax's fist bounced on the bar once to seal the bargain, and then he turned and started out. To his annoyance, the redhead was right on his heel. Even though he felt wildly attracted to him, for some unknown reason, the last thing he wanted to do get involved with someone while on a mission, and especially with someone so young.
"Why are you following me?" he asked over his shoulder.
"I'm just walking myself out as well," Alisander nimbly replied.
"Then, when we reach outside I expect you to go your way and I shall go mine."
"Unless your way and my way happen to be the same way."
Cax growled under his breath, and when they did indeed emerge onto Winemaker Row, in the blink of an eye, he had Alisander backed against the wall, his hands held prisoner within his own and thrust above his head. The position was meant to put him at a disadvantage, but Cax instantly saw his mistake. Without realizing it, he’d brought their bodies flush up against each other, and he couldn’t help but to grind his pelvis into the younger man, making sure he felt his hard cock so he’d know exactly what he was dealing with.
“What—”
“Shush,” Cax ordered, leaning forward a little to get a sniff of his scent. There was something sweet and intoxicating, and Cax couldn’t help but moan at the aroma. He had the urge to bite, to take, and that was something he’d never experienced before.
“Cax?” Alisander asked a bit breathlessly.
“Who are you?” Cax asked, feeling all shades of confusion over his powerful attraction.