Q&A with Doris O'Connor with a Sexy Excerpt! 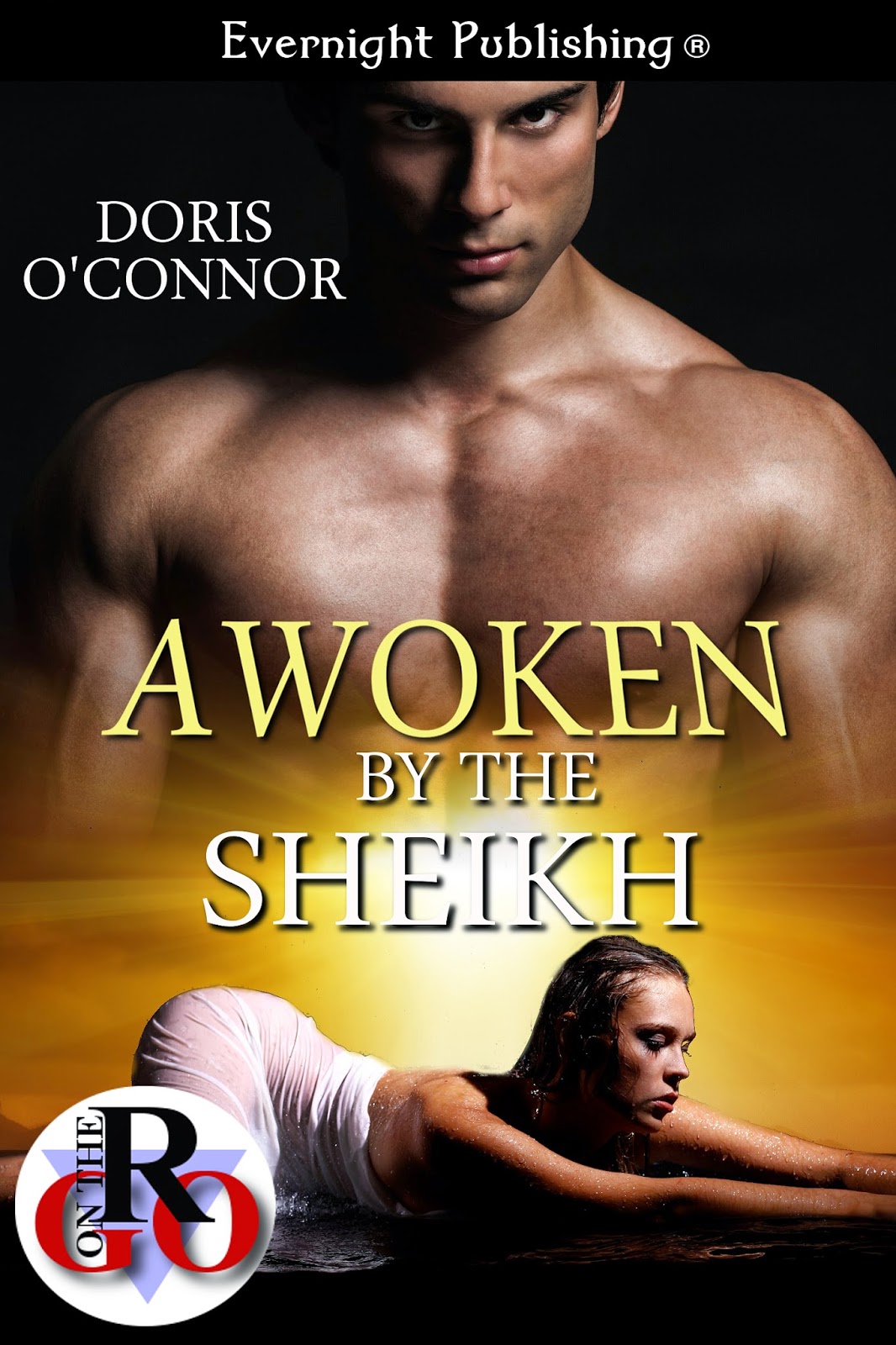 Hello Doris!  Thank you so much for visiting Written Butterfly with me today!  What a gorgeous cover for your new release.

Thanks so much for having me here, today, and I know. Sour Cherry Designs so nailed this cover! J

Fast forward a few years and I asked for my rights back, because this story kept niggling at me. I felt I hadn’t done it justice, and so I rewrote it, added quite a few K and this is the final article.

I need peace and quiet to get in the right frame of mind, so I switch off the telly, shut my door and stay off Facebook, and my fingers fly. Of course, once I’m truly in a story, and the characters are nagging me, I can write almost anywhere.  I’m completely character driven, so when they talk, I write. Fortunately they are usually pretty insistent to have their stories told.

I have another release coming up on September 24th with Evernight Publishing. The Bear Treatment is book 4 in my Projects series.

There’s nothing quite like being dumped by another good for nothing boyfriend to focus a girl’s mind. Fun has been missing from Louisa’s life for far too long, and a bit of wax play at the spa with a difference is just what she needs to take her mind off her birthday.
What can possibly go wrong? It’s not as though the man she’s been secretly lusting after for years would turn up and see her in all of her wobbly bits glory, or give her one mind blowing orgasm after the other, is it?
That would mean she is getting the bear treatment. You know the one—ends up with being mated to one droolworthy, dominant, bear shifter—and ticks off the council no end.
One thing’s for certain. After this birthday nothing will be the same again.

My  Muse was on a bit of a Bear Shifter voyage at the time, because my next release with Siren Bookstrand Publishing is October 21st, and the start of a new Paranormal series, called The Protectors.
Here is the blurb for Her Bear Protector:

From the minute Ronan Bernhard roars into Tina Snowdon’s sleepy village on his Harley, he inhabits her thoughts and dreams. The inked mountain rescue biker is a sex-on-legs hunk, and her knickers aren’t the only ones that melt in a flash at his wicked smile.
Ronan, however, keeps his distance and simply becomes another client of her cleaning firm, until the morning she turns up and finds his cottage trashed, and her life is turned upside down.
Bear Shifter Ronan recognizes his mate the minute he scents her. Having her clean for him means he can watch over her from afar, because to claim her as his mate and sub is out of the question.
As the village protector he has responsibilities he can’t ignore—duties that will place Tina in grave danger—even if she were able to accept not only his bear, but also his darker desires.
The morning she finds him injured, his bear takes over…

I also have the next story in this, Services to Sisterhood series brewing. I have a heroine in need of a pirate capture adventure, which ought to prove great fun to write.

As you might have guessed, there aren’t enough hours in the day for all the stories clambering for my attention.

Blurb:
Services to Sisterhood, 1
Loosen up and awake your inner Sex Goddess...call it services to sisterhood. 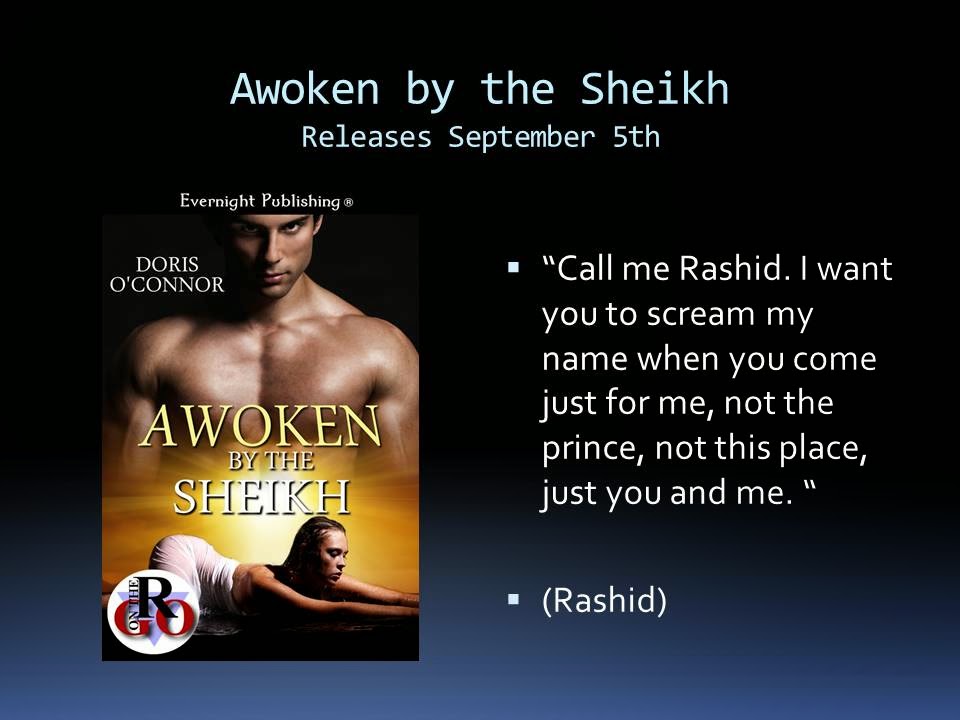 The mere thought of an all-expenses paid trip to a tropical island of sexual abandonment makes straight-laced school teacher Astrid break out in a heat rash. What fantasy is she supposed to live out, exactly? You kinda need to have them to re-enact them, right? However, she can’t really turn down a birthday present, even if her outrageous best friend would let her.

Everything changes when she wakes up in her very own Arabian Fantasy. Prince Rashid expects her complete obedience, and Astrid can’t help but respond to the demands of the enigmatic Sheikh. Maybe it’s just the ambiance of this place but Astrid finds new strength in her submission, and the sex is out of this world.

What happens, however, when reality beckons? Can she hold onto the fantasy?

Excerpt:
“Naughty girls need to be punished.”
Punished? What on earth did he mean? Before she could question him he spun her around in his arms. One hand pinched her nipple hard. The pain was more arousing than she would have thought possible, and his other hand fisted in her hair and yanked her head up. He pinched her again, harder this time. The desire she saw in his dark eyes as he assessed her reaction made the pain spiral down towards her pussy.
“Stop, you’re hurting me!” Is that breathy denial really my voice? Her heart turned into a jackhammer as she waited for his next move, and arousal warred with fear.
He tugged her closer into his solid wall of muscle. A small smile played on his lips at her sharp intake of breath when the move brought her clit in direct contact with the broad tip of his cock. It nudged at her through the thin fabric of both their clothing.
“You don’t want me to stop.”
The growl in her ear, combined with another sharp pinch to her other nipple sent her breathing into erratic overdrive as one large hand cupped her wet folds. Heaven help her, a stab of pure lust made her knees tremble.  His low chuckle had to be the sexiest sound she’d ever heard. His stubble grazed her neck as he suckled on her skin and sank his teeth into her flesh at just the right side of pleasuring pain.
He took her moan into his mouth, and his tongue dueled with hers, before he nipped at her bottom lip hard enough for her to taste her own blood. Startled, she tried to pull away from him. His iron grip wouldn’t let her, however, and his predatory smile held her captive. “I can smell your pussy, and I’m going to taste you until you scream for my cock to fill you, deep and hard, right here.”
Astrid gasped at the sudden rip of her dress, and cool air hit her naked flesh. Rashid thrust one finger into her juices before inserting that digit right into her anus, pulling her closer still. The shock of the unexpected invasion made her sink her teeth into her lips to stop herself from moaning. “No, please, Rashid.”
Another finger thrust deep, and lifted her up on her tiptoes until her hands had to grab his shoulders for support.
“That’s no, my lord.”
At the shake of her head, a third finger stretched her further, and she couldn’t help the startled sob he caught in his mouth in a bruising kiss.
“Yield to me, my bad, bad girl, or your punishment will be worse.”
Oh. My. God. He couldn’t mean that, surely. But what did she know about this dark stranger? Nothing but her body’s complete arousal in his presence. Even now, hovering between the pain and pleasure his relentless fingers up her ass were giving her, she wanted his cock inside her so badly she could scream. What is wrong with me?
His gaze locked with hers, his breathing harsh, his pupils so dilated his eyes were almost black. He pushed deeper into her, the pain bringing tears to her eyes as he almost lifted her off the floor entirely. “Yield to me, my pretty, now! Trust me.”
Astrid couldn’t resist. Something in that dark gaze pulled her right into his barely controlled power. “Yes, my lord.”
The brilliant smile took her breath away, and she winced as his fingers slowly and carefully withdrew.
“Good girl. Now shut your eyes.”
“Why?” She couldn’t help but utter the question, even though her insides churned at the thought of his displeasure.
Sure enough, he growled in answer, the sound so low and animalistic that every feminine cell in her body just melted, until she had to fight the urge to sink to her knees in front of him. He raised his eyebrows, moved to stand behind her, and then slapped her ass hard enough to make her gasp. Gooseflesh broke out over her exposed skin when he tugged her head back on his shoulder and she saw his sinful grin. Astrid’s breath stalled in her lungs at the first of several more openhanded swats to her behind. They left her butt on fire. Heat traveled over her skin and sent her arousal up another notch. Surely being spanked like this should not turn her on even more, and make her wish he would bend her over his knee and do the job properly? By the time he’d delivered that last stinging swat, she gasped her answer.
“Yes, my lord.”
“That’s better, my pretty.” She could hear the smile in his voice and feel it in the butterfly kisses on her shoulder blades as he circled her. The swish of cool silk over her sensitive tummy made her pull in the muscles there in anticipation. The silk moved higher, a bare whisper across her engorged breasts, before it settled over her eyes. His warm hand grasped hers and lifted her arm high as another slow, tantalizing swish of silk slid up her body before he tied it around her wrist, and secured her arm high above her head. The tickle of yet more silk started on the inside of her thigh this time, and brushed across her clit repeatedly. It caused more of her juices to moisten her already wet pussy lips, and beads of perspiration broke out on her skin. Astrid could smell her own arousal in the air, mixed with the unique scent of the man breathing into her ear. His sharp intake of breath told her he was as affected as she was. The whispered Arabic words breathed against her flesh sent shivers of awareness down her spine. Rashid lifted her other arm so high, she had to once again stand on tiptoes.
“My lord?”

*****
Author Bio:
Glutton for punishment would be a good description for Doris... at least that's what she hears on an almost daily basis when people find out that she has a brood of nine children, ranging from adult to toddler and lives happily in a far too small house, cluttered with children, pets, dust bunnies, and one very understanding and supportive husband. Domestic goddess she is not.
There is always something better to do after all, like working on the latest manuscript and trying not to scare the locals even more than usual by talking out loud to the voices in her head. Her characters tend to be pretty insistent to get their stories told, and you will find Doris burning the midnight oil on a regular basis. Only time to get any peace and quiet and besides, sleep is for wimps.
She likes to spin sensual, sassy, and sexy tales involving alpha heroes to die for, and heroines who give as good as they get. From contemporary to paranormal, BDSM to F/F, and Ménage, haunting love stories are guaranteed.
Stalking Links
Website Blog Twitter  Facebook Pinterest  Evernight Publishing
Amazon All Romance E-Books BookStrand Barnes&Noble