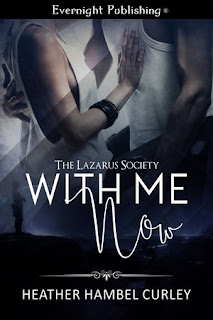 Loud music and rainy days!  I have a play list simply titled “writing” that has everything from Swedish death metal to One Direction that I play to get me into the mood to write.  I search Pinterest for pictures related to whatever piece I’m working on and pin them to an inspiration board.  For me, both visual and auditory prompts help me get in the mood to write.  And, in the end, a gloomy, rainy day is the perfect time to settle down and be creative!

Yes!  The Lazarus Society is going to be (at least) a trilogy following archeological digs/ghost encounters that Madison works.  They won’t be limited to the American Civil War, but will branch out into other areas and time periods.  I’m writing them as a series, but since they will be about vastly different areas, they would work as standalones as well.

Real life always influences my writing.  In With Me Now, I based a lot of Liam’s quirks and manner of speech on the guy who sat on the other side of my work cube wall.  The Lazarus Society series is about archeologists and, in reality, I’ve only spent about two days out of my life volunteering on an archeological dig.  Those two days, though, inspired my book!

I don’t think you should limit yourself to only “writing what you know” but I use what I know, what I’ve experienced, and even the way I talk, into my writing.  The rest I just research until my fingers go numb!

I am working on the sequel for With Me Now and another paranormal/murder mystery.  My upcoming release is a historical fiction titled Anything You Ask of Me about the American Civil War.  It will be released on August 4, 2015 as a hardcover and an ebook.

1.        Are you a pantser or a plotter?  I’m definitely a pantser.  I can probably count on one hand (with fingers left over) the amount of times I’ve plotted out my books.  I think it reminds me too much of forced outline writing in college!  I like to just sit down with music and write until I stop.  Or fall asleep (FYI: kkkkkkkkkkkkkkkkkkkkk does not count as novel writing, haha).
2.       What authors have inspired you to write?  I am inspired by the passion and commitment of JK Rowling and her ability to create entire worlds with their own laws, rules, games, and forces or good an evil.  Robert A. Heinlein inspires me with the foresight and creativity he showed science fiction in 1950s and 1960s.  And, of course, George R.R. Martin inspires me with this spunk, sass, and commitment to writing the way he wants to write.
3.       How important are names to you in your book?  For me, naming a character is like naming a child.  You’re going to be with this person for the entirety of your book/series.  Try going outside and yelling the character name over and over again.  If you don’t get sick of it, that’s the name you should go with.  This is also how my husband and I named our second child.
4.       Is there a certain type of scene that’s hard for you to write?  I’m bad with sex scenes.  For the sex scene in the first historical novel I wrote, I couldn’t even bring myself to look at the screen while I typed.
5.       What is With Me Now about?  With Me Now is about Madison Monroe, a college student on her first archeological dig.  She’s working in Gettysburg, Pennsylvania, and finds something buried on the battlefield she didn’t expect to find.
6.       How much research did you do?  I’ve been Civil War reenacting since 2001 and met my husband at Gettysburg, so I’m very familiar with every nook and cranny of the battlefield.  In 2004, my husband and I were volunteers at Harpers Ferry National Historical Park in the living history department.  For approximately two days, I worked on an archeological dig and, from that, this novel was born.  Most of the research I did was archeological terminology and techniques of speaking/interacting with ghosts.
7.       What writing advice do you have for aspiring authors?  Never quit.  It’s too easy to get frustrated: with writing, editing, submitting, rejection.  If this is what you want, work for it!  Believe in your idea and your writing.
8.       What are you working on now?  Right now, I’m working on the sequel to With Me Now, toying around with two other paranormal romances, and one historical.  There’s always another Chapter 1!
9.       And finally, two just for fun:  If you wrote a book about yourself, what would the title be? Probably something along the lines of, “So this happened….”
10.   What are five adjectives you feel describe you?  Loving, nerdy, awkward, rambunctious, and groovy

Madison Monroe is an anthropology prodigy.  She’s poised to graduate with a double major.  She’s published in scholarly journals and archeology magazines.  With limited field experience, the crowning jewel for her graduate school application is an upcoming dig in Normandy.

And she just got arrested for underage drinking.

Less than a month before she turns twenty-one.

Now, instead of taking part in her dream dig, she’s kicked off the crew and barely escapes academic probation.  Her only option for her application is a routine archeological survey in Gettysburg, Pennsylvania.

Once in Gettysburg, though, the “simple” dig isn’t exactly what it seems.  Madison can feel a presence watching her and can hear voices of the dead calling from the battlefield.  And, when she discovers a long buried secret at the Spangler Farm, she inadvertently sets off a chain of events that will put everything—including her life—on the line.

The hot water and steam of the shower was relaxing, enough to kick the butterflies in her stomach into submission.  Her muscles ached.  The tendons and ligaments in her upper shoulders and back throbbed as if she’d been moving heavy furniture all week instead of throwing her weight against the screen sifter.  It was just another brutal reminder that, although she was thin, she was pathetically out of shape.
She stood under the unrelenting water, craning her neck from side to side in an attempt to work the muscles loose.  Maybe Mike could crack her back for her.  She smirked.  Now that was a pickup line she’d have to remember: say, care to get on top and crack my back?
Once the conditioner was rinsed out of her hair, she turned the faucet off and reached for a towel.  Her hair was getting long. It seemed like she’d need to use two or three of the thin, white hotel towels to sop up the excess water.  No matter, she could resort to using the room’s hair dryer and, in forty-five minutes or so, the feeble little machine might get her hair dry.  Damn it, of all the things to leave at home.  She hadn’t planned on needing to look as attractive and desirable as humanly possible. If she had, she’d have brought along a better selection of makeup.
She towel dried her hair enough to keep water from trickling down her back, and then wrapped another towel around her body.  It was a good thing she’d done a load of laundry the previous day. Not that she had “date” quality outfits with her, but she was fully aware which pair of jeans accentuated her curves the best.  She pulled on a red vintage style t-shirt emblemized with a grayed out Union Jack. It was casual and cute, though she was reasonably sure her clothes were the last thing on his mind.
The steam from the small bathroom had filtered out into the sink area, fogging up the mirror and giving everything a generally damp feeling.  She wiped her hand across the condensation covered mirror. In the unobstructed reflection she could see a figure, a man, standing directly behind her.
She bit back a shriek and jerked around.  There was no one there; the room was empty.
“Shit.”  The words felt as if they bubbled out of her throat, pushed out by her rapid heartbeat.  She gripped the countertop with one hand to steady herself.  The reflection in the mirror was clear and crisp.  It wasn’t a shadow or the light playing on the steam from the shower. It was a man.  It was him, the man who’d been watching her for days.  He’d stood and watched her at the Spangler Farm.  He’d breathed on the back of her neck, whispered in her ear as she worked in the test pit.
Now he was in her room.
Madison swallowed hard, peering into the main section of the hotel room.  It was empty.  Nothing was out of place, no one was watching her from any corner of the room; yet, she didn’t feel completely alone.  He was still there.
Her hand faltered on the countertop and she sank backward, half sitting, half leaning against the sink.  The air in the room felt soupy and stale.  Gooseflesh rippled down her still damp arms and across her back.  What in Christ’s name did he want from her?
She felt him next to her, his breath on her shoulder.  Please.
Could he hear her when she spoke to him?  It was worth a try.  “I’m not sure I know how to help you.”
But she knew someone who did. 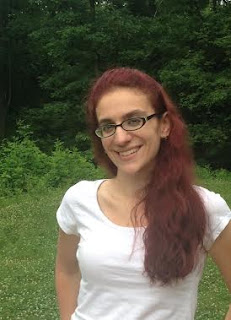 Heather currently resides in Western Pennsylvania with her husband and two songs.  When she’s not writing or working as a disability claims analyst at an insurance company, she enjoys traveling and training to run 5ks.  She also enjoys white wine, One Direction, and getting tattoos.