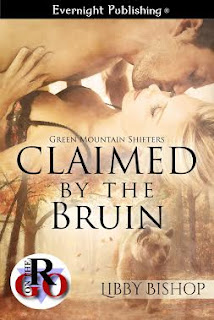 With this book, the dynamics were clear once the female character—Mara—came to my mind and started talking. I knew exactly how these characters worked, what their motivations were. Normally, the world grows as I write it, and I learn new things as I dig deeper into the world, but with this shifter world was crystal clear.

Not really. The characters/ideas normally come to me and I start writing immediately because I don’t want to lose the voice or idea!

Yes! This is the first book in the Green Mountain Shifters trilogy. I’m currently finishing up the second book and hope to have it to the publisher by the middle of August.

Right now, this is the only book I have scheduled out this year. But I’m hoping book two will be out before the end of the year.

BLURB:
Shifter politics can be a real bitch.

Mara Kane is a twenty-six year old woman who happens to have bear blood. She can’t shift…yet. But that doesn’t stop Lee Underhill, an exiled bruin, from taking his revenge out on her. After all, it was her father who played the largest role in him being exiled from the Clan and Northeast pack. Lee’s demands are clear—if she isn’t married and mated to a bruin in her clan in three days, she has to marry the bastard’s son.

The hell with that.

Ramsey McGregor is the son of her Clan’s alpha, and one day he’ll take his father’s place. When he finds out what Lee is forcing on Mara, he, as well as her father and his, decide to do the only thing they can to keep her with them—marry her to him. No territorial council would ever dispute the union. But can he soothe Mara’s nerves enough to bring on a true mating? Or will the Clan have to fight Lee and his people to keep her with them?

Once the two men were out of the room and the door was closed, Angus stepped in front of her, clasping her upper arms gently in his large hands. She had to crane her neck to look up at him, as he was six-foot-seven and she was only five-foot-six. Short for a bear shifter, but her human blood didn’t allow for the usual tallness.

“Not marrying him could mean a war, but we do have options.”

“What would those be, Angus?” she inquired, trying to swallow her anger. He knew it wasn’t directed at him, so she wasn’t worried about the bite in her tone. “I’m a twenty-six-year-old woman—this loophole in the treaty should’ve been taken care of decades ago.”

Regret pinched around his eyes. “I know, and we are working on it—all territories, but it’s a slow process. The alpha women of the Pack Councils have been pushing its importance for years. We just haven’t gotten to it yet.”

Much of the old treaty, which included the wolf and cat shifters, had been changed and updated for the times. But these things took time, especially when the treaties involved six territories, each with their own Pack Council.

Though, cat shifters were in prides, wolves in packs, and bears in clans, Pack Council was just easier to use. The US government preferred it as well—simpler when dealing with the ruling parties.

“We could fight them, but that would endanger us from the Northwest clans. Or, and this is only if you agree, we marry you to one of our bruins. But, if for any reason you can’t go through with the mating, we’ll have to hold a territorial council meeting and try to force the change in law.”

But that could still lead to the war Lee Underhill knew they didn’t want. There was no choice here—it was marriage to someone she knew, or risk war, because she was not marrying Cole Underhill. Under any circumstances.

She sighed, most of the anger leaving her on the exhale. Acceptance took its place. “Do I get to choose the bruin?”

Angus’s hands left her, and the kindness in his gaze told her the answer was no.

“It’s best that I choose. As the alpha of the clan, the Northwest Pack Council won’t argue with my choice, nor the choice of your father—my second-in-command and top enforcer.”

Her gaze flicked to her father, who gave a nod. His body language told her to listen to Angus.

“Who did you two choose for me to marry?”

“My son, your future alpha.”

That froze her in place. Ramsey McGregor was a good man, and a great bruin, but he was twenty years her senior and was known to not be interested in marrying. Not that she could blame him. Shifters lived a long time, around two hundred and fifty to three hundred years. He was only forty-six—young, but not unheard of to have a mate.

“True, but with what I smelled when you were looking at Cole, I would say it’s more than likely you will. Your bear is strong, Mara, and you are your father’s daughter.” He smiled briefly. “And you are fast becoming one of the top liaisons within the Northeast Pack.”

A liaison to the government, keeping them up to date on the changes in the pack as well as fielding the concerns the government had with the pack. She had a good relationship with the state government—Vermont accepted the shifters with more ease, since they’d been there before it was a state, and had helped form what it presently was. She was also on good terms with her Federal government contacts. She’d never thought that would be her place, but she found she liked navigating those waters.

“Have you talked to him about this?”

Angus’s wife, and one hell of a force in terms of being a bear. She’d seen the woman take down shifters twice her size in a matter of minutes.

Rayna had taught her how to stand her ground and fight when needed. She and the two men in the room with her.

“What does he say about this?”

Her father moved to stand beside Angus. “He’s not happy with the Underhills. He was around when we exiled Lee thirty years ago, and saw the upheaval that caused.”

She’d heard about it. Eleven bruins and three women chose to go with Lee, siding with him. They could have stayed, but the trust in them was in tatters and they felt it easier to start over.

She met her father’s blue gaze. “So, he’s okay with marrying me?”

He placed a hand on her cheek. “He feels it’s his place, as an alpha-to-be. But mostly because he agrees that it’s best you marry a bruin who has pull within the Council. A lesser bruin won’t survive a challenge from Lee or Emery, and no one will challenge the marriage of you and the son of an alpha.”

Made sense. She still didn’t like—still hated it—but the choices were limited. It was give Ramsey a chance or risk war. Not much of a choice, really. And she did trust him, wholly. That trust had been won when she was six years old and she’d first seen him shift—he was massive to her then, still was. She remembered fondly how he’d lowered his head to her and she nervously placed her palm against his soft-but-slightly-rough fur. That moment, between bruin and human, had shown her that she was protected by more than just her father in the big, wide world.

That she would always be protected by Ramsey—both the man and the bear.

Looking back to Angus, she asked, “It’s almost midnight now—when do we get married?”

https://libbybishopromance.wordpress.com/
Posted by Beth D. Carter at 11:10 AM