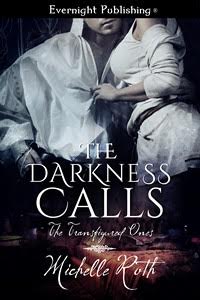 Hi Michelle!  Thank you so much for visiting Written Butterfly!

Hi there, everyone! I'm Michelle Roth and I'm here to introduce my latest release, The Darkness Calls [The Transfigured Ones]. This book is entirely new territory for me. Where most of my works have been ultra-realistic contemporary romance, I wanted to add in a touch of the paranormal here!

I was daydreaming one afternoon, as I'm prone to doing and I wondered what life would be like if we lived in a world where we actually knowingly co-existed with vampires. Not in an overtly us vs. them way like the Sookie Stackhouse series, but in a world where all the fuss had long since died down. What would that universe look like? How would humans and vampires interact? How would they feed? How would they work? Interesting questions, right?

It happens in strange ways. Sometimes I'll be sitting in the car and things will just come to me. Other times, a conversation with hubs will shake something loose in my brain. Suddenly I'm typing away furiously in my cell phone. The inspiration for the characters in THIS particular book came from a book I read. The heroine's reaction to the big “I'm a vampire” reveal seemed really off to me. So I started thinking about ways that it could have been plausible. That's how the entire The Transfigured Ones series came about.

I try to keep my books as close to real life as I can. There are paranormal elements obviously, but I wanted the characters to feel genuine and true to life. As for what bleeds over into my personal life, some of the characters are loosely based on people I know. In other words, don't make me mad or you may die in my books ;)

Right now I've got three open series that I'm working on. This series, The Transfigured Ones, focuses on a world where vampires live out in the open with humans. The Darkness Calls is the first in the series. The follow up, Bite Me is my current work in progress. I hope to have that wrapped up by the end of the month.

Diamond and Diamond Private Investigators is a contemporary romantic mystery series about a team of   detectives that are cold as ice undercover and sizzling hot between the sheets. The first two installments are out, and I've got a total of six planned.

The Forsaken Few is about a group of shapeshifters that live outside the bounds of normal shifter society. For whatever reason, they've either been ousted or left their families in search of something different. The first in this series will be out in August or early September.


When Lilly Ferguson narrowly avoids being mugged after work, she's shocked to find that she's gotten the attention of Talan McKenna. He's the sinfully handsome owner of the Foxwood Casino and Spa where she works. There's only one problem, though...

Talan is one of the Transfigured. Like half a million others across the globe, he possesses a very specific genetic mutation. It leaves him with the inability to age, an aversion to sunlight, and a thirst for human blood. When he learns of Lilly's tragic past, he worries that it's an obstacle he'll never be able to overcome.

Despite her heartbreaking history with the Transfigured, Lilly immediately senses that Talan is different. Where her fears once lay, there's only a sense of peace and comfort. Just as they begin to build a love made to last several lifetimes, a shadowy figure from her past emerges and threatens to destroy everything.

Excerpt: Within ten minutes, she was surrounded by two security officers and a doctor. He gently prodded at the knot on the back of her head, while she held ice against her throbbing cheek. As he started to shine a small flashlight into her eyes, she heard a deep voice in the hallway murmur, "Where's the girl? Was she seriously hurt?" When he stepped through the door, she realized it was the owner of the casino. She had seen glimpses of him on occasion, but she'd never actually spoken to him. His eyes swept the room and landed on her. She blinked in surprise as he knelt down next to the doctor, so he was eye level. His eyes settled on the bag of ice she held against her face. He didn't speak. The small tic in his cheek was the only reason she could visibly tell that he was upset. Otherwise, his facial expression gave away nothing. His voice was devoid of any emotion when he spoke. "Miss..." he paused, prompting her for her name. "Lilly. Lilly Ferguson." He nodded and continued, "Miss Ferguson. You're okay?" She winced. "I hit my head. He hit me in the face. Otherwise, I'm fine." His eyes swept over her, as if he was trying to verify for himself. His eyes took in her bag. The strap had a tear, but for the most part it was still intact. Lilly followed his line of sight and took in the torn bag. "That was a casualty of war, too, I guess," she said with a smirk. A slight smile curved his lips as he said, "I'm sorry for your loss. I'm surprised you didn't just give it to him, though." "I'm not willing to part with what little I own, Mr. McKenna," she answered honestly. He nodded as if he understood. Lilly stared blankly at him. She had serious difficulty thinking he'd be able to relate to her in any way. He was one of the Transfigured. Rich as Croesus, he owned the casino, and was a huge power player among his kind. Her thoughts must have been written all over her face because he said, "I've had almost five hundred years to become who I am, Little One. I can still remember when I had nothing. When I was nothing. I admire your spirit." She swallowed, uncertain. "Will you be okay to drive home?" he asked. The doctor cut in from the other side of the security office. She hadn't even realized that he'd moved. He said, "I wouldn't recommend it, Mr. McKenna. She needs to rest in a dark, quiet room at the very least for the next eight hours. She's showing signs of a mild concussion." "Very well," he said, addressing the doctor. He turned to face her and said, "Someone from the hotel will ensure that you get home safely." "But," she asked. "What about my car?" "It can be delivered to you. When do you work next?" She blinked, trying to fight the fuzziness in her mind, and said, "Tomorrow afternoon." He shook his head and said, "We'll reassign your shifts for the next two days. Take the time off." "Thank you," Lilly said. She couldn't imagine doing much of anything except laying under her blankets, if her head persisted in feeling like this. "Keys," he prompted. She picked them up, then she winced as there was dried blood caked on the car key. She gingerly removed it from the ring and said, "Sorry. It may need a rinse. I managed to gouge him a couple of times." His eyes widened incredulously for a moment before he reached out and took the key from her. He didn't seem to have an aversion to the bloody key. It was, she supposed, his meal of choice. A slow smile, a genuine one, pulled across his face. He said, "Yes, Miss Ferguson, I do admire your spirit." About Michelle: Michelle Roth is a novelist from the Great White North (Toronto, ON). When she's not disappearing into foreign lands, or making two perfect strangers that she invented fall in love, she's probably curled up somewhere with a glass of wine and a good book. In her spare time she is typically hanging out with her awesome boyfriend and their two equally awesome cats. She likes taking road trips to nowhere in particular, cooking elaborate meals then making other people do the dishes, and being nerdy on the internet. Her books are currently available on Amazon, Nook, Kobo, and any other place that sells absolutely filthy romance novels. Contact Info: Twitter: http://www.twitter.com/mroth_author Facebook: https://www.facebook.com/mrothauthor Website: http://www.michelleroth.net Newsletter: http://michelleroth.net/mailing-list/ GooglePlus: http://google.com/+MichelleRothAuthor Goodreads: https://www.goodreads.com/author/show/8178847.Michelle_Roth Amazon Author: http://www.amazon.com/Michelle-Roth/e/B00KQNZOAW Email: michelle@michelleroth.net
Posted by Beth D. Carter at 12:02 PM