Q & A with Kait Gamble on her NEW RELEASE! 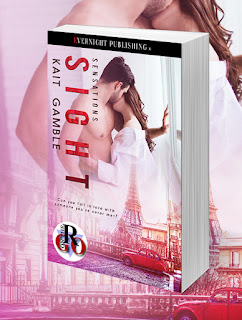 Hello Kait!  Thank you so much for visiting Written Butterfly with me today!  It’s such a pleasure to chat with you.  So tell me…


Hi Beth! Thanks for having me!


I’m a pantser so I generally make it up as I go. I usually start with a vague idea of characters, who they are, what they do, what they want and how I can keep them from getting it. From there they develop as the story does. There have been a few times where I’ve had the characters fully fledged and ready to go before even starting the story, but that’s pretty rare.


Sight is the second book in the Sensations series, a collection of non-connected stories based on, you guessed it, the senses. Sight takes place in Paris where two people connect after watching each other through their windows night after night. It starts off innocently enough but then heats up considerably…

I think my strongest asset is that I can adapt quite quickly. Taking new ideas and information and making them work is fun for me. Like a puzzle. But it’s also my weakness because knowing where and when to stop can be a struggle.

I do like to have each book stand on its own, but there are threads throughout a few that link them together. There are several stories where characters from one of my other books appear, they visit a few familiar places, companies that characters own show up in more than one book, familiar names pop up here and there…


I’m usually working on multiple projects, but at the moment I’ve prioritized work on a secret one that I hope I can reveal soon! All I can say at the moment is it’s exciting and has me in caffeine fueled writer mode. On top of that I’ve got two series going, Sensations and one that will be announced soon, two others and a YA series…looks a little insane when I write it out like that! Wish me luck!


Can you fall in love with someone you’ve never met?

Chloe has. Or, at least, she’s fallen into lust with the man who lives in the apartment opposite hers. Night after night they catch glimpses of each other going through their evening routines. But it’s a delicious surprise when things take a more salacious turn inviting her into a voyeuristic fantasy.
Mason can’t believe his luck that he’s found himself in what can only be described as the perfect relationship. Companionship, nightly stress relief, and all without having to deal with any drama. All he has to do is look across the way at the gorgeous siren in the window who’s more than happy to play along.

But what happens when watching no longer enough?


Chloe lifted her gaze to the building across the way. The fact that she could see directly into a few of the multipaned windows used to bother her, but now it helped with the loneliness of living alone in the city. Seeing others going about their lives had a soothing quality.

That was a predilection she’d never seen coming.

Sighing, she undid the tight bun her hair had been trapped in and shook it loose. As she massaged her scalp, Chloe caught a glimpse of movement out of the corner of her eye.

She turned to the window where her attention always seemed to be drawn—right across the way.
They both had penthouses. He didn’t seem to feel the need to make use of curtains or blinds, while Chloe left hers open until she went to bed. It allowed her to see inside the rooms he inhabited. While she couldn’t see everything, she was close enough to witness what was happening as if it were a modular television.


There he was. Tall, broad-shouldered, dark-haired, and so very sexy. Even across the distance, she could see that. Almost feel it. He exuded power and privilege. It was there in his bearing, the feline grace of his movements. But he was no weakling. He had the long lean body of someone who worked hard to maintain it. She could see from the way the clothing pulled on his skin as he moved that there were powerful muscles hidden beneath. Muscles she wished she could see right that moment.
He’d just gotten home from work, judging by his attire. He swiftly slipped off the jacket of his dark suit and slung it over the back of the couch. His tie quickly followed.

Chloe watched as he rolled up his sleeves to reveal sculpted forearms, and the movement of the muscle there as he undid the top buttons of his shirt. His body relaxed as he appeared to sigh with relief. She knew the feeling well.


He pulled his phone out of his jacket pocket and dialed. Probably to order a meal just as she had.
Smiling, Chloe continued to linger near the window, dusting an already glossy wooden end table as an excuse. When she looked up again, she found him still speaking but staring out through his own window. Directly at her.
Caught, Chloe stood frozen. Their eyes stayed locked until she broke the stillness with a small wave. It was nothing more than the lifting of her hand, but she thought she saw a faint smirk as he nodded. Chloe smirked back. It seemed she’d made a friend.

She didn’t have time to dwell on it before there was a knock at her door.


Letting her gaze linger on him a moment longer, she turned to retrieve her meal from one of the beaming concierges. Thanking and tipping him, Chloe then headed back into the dimly lit room.
She took a portion of the food and put it on a plate, poured the wine, then she headed to the couch to enjoy her meal. Instead of turning on the television to hear nothing but doom and gloom in the world, she opted to turn on the stereo instead. The light jazz that filtered into the room was perfect for her mood. After the day she’d had, it was all Chloe wanted.


She swayed along with the music as she enjoyed her noodles and pot stickers. It really was the simple pleasures that kept her going. Good food, beautiful home … all she needed now was good sex.
Chloe almost choked on her wine as she snorted at the thought. Not likely.


The city might have been filled with handsome men but none of them had truly caught her attention. Her gaze was drawn across the way again.
None except him.

Out of the corner of her eye, she could see him regarding the city under him in the manner of a king surveying his kingdom. Who was he? What did he do? He was obviously quite well off to be living where he was. Maybe he was a model? An actor?


Chloe shook her head. Not with those suits and regular hours. He was like clockwork. Just as she was. She pictured him in a boardroom commanding attention, everyone cowering from him. He’d be a terror in the office and a demon in bed. Did he have a soft side? Maybe one only that special someone saw?
Huffing a laugh, she stuffed a pot sticker into her mouth. Not that she’d ever find out.
When she lifted her gaze again, she found he’d grown two more arms. They wrapped around his chest from behind, the red nails clawed into his pecs, the need in the person they belonged to quite evident. When had she arrived?


The stab of jealousy was a surprise. The man wasn’t hers. Who he got naked with certainly had nothing to do with her.
She did watch with great interest as he turned to grip her face in his hands and devoured her mouth with a ferocity that Chloe herself had never experienced. She could feel the heat as if she’d been the once he’d kissed.
The darkness of the room enveloped her, the food forgotten. Everything but the two people lost in each other dropped from existence. Entranced, Chloe could do nothing but watch them. 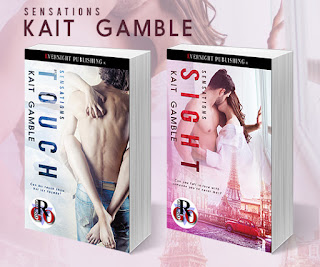 An inveterate traveler, Kait has set foot on three continents and has the other four on her bucket list (yes, even Antarctica). Until she can see them all, she writes romances that take readers to far flung locales, often to places she’s been or hopes to one day go. For now, she’s settled in England where she spends most of her time plotting, scribbling ideas on every available scrap of paper and trying out dialogue on her cat.
SOCIAL MEDIA: