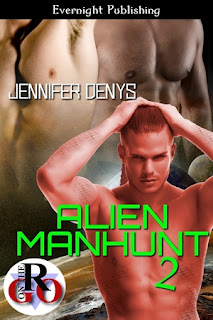 Funny you should say that…. Because I did dream them up, literally! As I was waking from sleep one morning I thought to myself, “Hey, that would be a great idea for a short story!” I had never written a short story – nor MMM - before ‘Alien Manhunt 1’ so it was a challenge – but fun!

The characters came from the dream – the human, Greg, the elf-like Espoornian, Suva, and the reptilian Cinattran, Taran, and how three very different aliens could fall in love and have a relationship.

It was originally intended to be a one off story but I liked the characters so much – and readers said, “What happens next?” so I wrote Alien Manhunt 2 to be the continuing story of these three characters. Each of them are featured on the front covers with a different one in the forefront.

However, it wouldn’t be fair to only feature two of them so there will be an Alien Manhunt 3 with Suva featured on the cover and set on the last of the three aliens’ planets.

Thanks for having me.

Blurb: Planning to let his mates act out their fantasies, Suva takes them to his home planet of Espoornia and lets submissive Taran chase dominant Greg for a change, with a sneaky scheme to end it all in a marriage ceremony.  But Suva’s plans go awry from the start and one of them is hunted for real. Worried about the one captured being sold or killed, the remaining two have a hard time searching for the other. But then they find themselves in danger, too! Will they escape? Will they ever be free to marry?

I liked the characters so much after writing about them for Alien Manhunt 1 (and readers wanted to know ‘What happened next?’) so I decided to write the next stage in their relationship. Like the previous book it is a short story showing an episode in their lives of the characters.

It is intended to finish with Alien Manhunt 3 - that one set on Greg’s planet.

She posts to her blog three times a week to keep readers up-to-date on forthcoming books and writing in general. Do email Jennifer she would love to hear from fans.

“No way am I running around naked.”
The two others also standing in the immense forest looked at Greg in astonishment. He knew he sounded petulant, however, he hadn’t expected Espoornia, the home of his elf-like alien partner, Suva, would be so damn cold. It was nothing like their home on the space station, Orion One, which served as an administration, communications and military point for the various nations that co-habited that area of the galaxy. Even his birth planet of Earth, which he hadn’t visited for some years, was far warmer. Unless you were at the poles of his home world, of course.
He shivered and resisted the urge to cup his cock. “If I run around with no clothes on my dick will go blue. Jeez, it will do more than that—it will freeze and drop off!”
Suva said something in his own language and stormed off, his long yellow coat flowing behind him as his lengthy strides took him back to their car shuttle. A densely covered planet, it was impossible to fly from one place to another so the only transport was land-based. Even taking this vehicle involved a journey of many hours.
Taran, the third in their relationship, a reptilian from the planet Cinattra, gave a quirky smile, his dark eyes twinkling in amusement at Suva’s outburst as Greg glanced in his direction. The alien looked away, as if he didn’t want to repeat the Espoornian’s words.
Greg huffed. “So what did Suva just say? I am guessing he swore at me, or something?”
On the space station, translations were broadcast immediately if anyone spoke anything other than the galactic language. There were no such facilities in the middle of the cold—but stunningly beautiful—forest where the trees rose to impossibly soaring heights. It made Greg dizzy looking up.
Taran laughed and Greg studied him, amazed that the youngest of the trio could go bare-chested in this temperature. He might be presenting his gorgeous red, muscular chest, as was normal in his culture, the scales on the sides of his body showing above the belt, but Taran was from a hot world, which made it even stranger to Greg. At least Taran wore leather boots to match his black, jewel-encrusted skirt and the band around his neck. The latter was a sign of his submission.
The Cinattran nodded. “Yes. It was something about your manhood being too small to drop off, and even if it did he would stuff it up your soft human backside.”
Greg’s face tightened. But he couldn’t stay angry for long, and a chuckle escaped him. “I’ll show him too small one of these days!” Walking over to Taran, he ruffled his partner’s long red hair, tied back in its customary plait, so different from his own closely cropped hair. Greg was the dominant one in the relationship, having picked up both guys at a bar on the space station. Suva could switch between roles, being submissive with him while dominant with Taran, who was submissive to both of them. Their relationship usually worked well.
Except everything had changed.

Or if you want a hotter excerpt:

“Show me what else you do with those talons of yours,” Suva requested in a husky voice as he pulled Taran forward. Cupping the Cinattran’s head, he then gave his young partner a passionate kiss, plunging his tongue inside Taran’s mouth. He so wanted to lay him on the floor and take him then and there, using the yellow rubad plant that he could just see through the trees. The plant had marvelous properties, but that was not in his plans—yet.
Taran took him at his word and wrapped his hand around Suva’s cock through his loose trousers. He did not jerk him, although he gripped it tightly. Suva moved his legs apart to give Taran more room, then raising his head, Suva let his tense neck muscles ease up. Closing his eyes, he allowed himself to enjoy the sensation as his little lover gently ran the ends of his claws along Suva’s long, long shaft. The frisson of tiny pinpricks caused him to catch his breath.