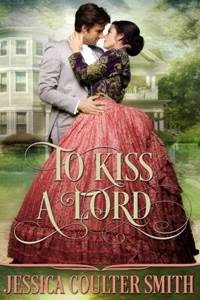 Clarissa came to me during a time of extreme pain. I suffer from Lupus and my knee and hip joints were giving me fits, making it next to impossible to walk. As I took a pain pill, the thought popped in my head, “what would I have done in the 1800s?”…so I came with Clarissa, a beautiful woman who was damaged in a carriage accident in her teens who now suffers a limp and severe pain in her leg that keeps her from dancing, and sometimes from walking.

Robert, being the younger son with many brothers between him and inheriting his father’s title, is in the unique position of marrying for love. His father has set him up well enough that only greed would lead him to marry for anything less. And Robert is far from greedy. He’s tall, dashing, and quite charming…and very determined to win Clarissa for his own, by any means necessary – even if it means ruining her.

Well, I won’t say more or I’ll give away the story, but suffice it to say, they are perfectly matched.

Yes, this is book one in the Lords of London series, which was picked up by Coastal Escape Publishing. I’m only planning for there to be three books in this series, but I’ve found that characters have a way of sneaking up on me so who knows what will happen in books two and three that may lead to a longer series. The series is set in America in the 1890’s with English lords on a search for their brides. Tired of the simpering young misses in London, each man (a younger son to a titled lord) has decided their future lies with an unconventional wife. They just don’t realize how unconventional their wives will be until they meet them.

Clarissa Townsend has given up on anyone ever wanting to marry her. It isn't that she's ugly, because she's been told by many that she's quite beautiful. It's her blasted limp. A carriage accident when she was fifteen resulted in ugly scarring on her leg, and left her with a horrible limp that keeps her from dancing, and sometimes walking.

Lord Robert Cresthaven came to America in search of a bride, and the moment he sets eyes on Clarissa, he knows he's found her. With her raven locks and pale complexion, she's the most beautiful creature he's ever seen. Her limp doesn't detract from her beauty in his eyes and he's determined to have her, at any cost.

A scandal. An unwanted marriage of convenience. And a damsel in need of rescue.

When Lord Cresthaven is caught kissing Clarissa at a ball, it's all anyone can talk about. But things don't go according to his plan. He had every intention of marrying her, until her parents locked her away and promised her to another. What's a lord to do when the only woman he's ever wanted to marry is kept out of his reach? Anything necessary.

AUTHOR BIO
What happens when you get two artist romantics together? An impulsive marriage proprosal – and a woman who says yes (on the first date)!  While Jessica’s husband may not have intended for the words “marry me” to pop out on their first date, she surprised him even more by saying yes! That was over 14 years ago and they’re hoping for many more years together.

Jessica Coulter Smith began writing at an early age, but it wasn’t until 2008 that someone convinced her to have one of her stories published. When she received her acceptance letter in August 2008, it set her on an incredible journey, one she hopes will never end. In 2010, she decided to stay home with the kids and write full-time. It’s a decision she hasn’t regretted, and one that will hopefully result in many more stories to come.

Jessica loves to interact with her readers on Facebook and Twitter! But if you send her a friend request, be prepared for cute kitty pictures and kids getting into mischief, as well as updates on her writing.
Visit her website: http://www.jessicacoultersmith.com
Email her: jessicacoultersmith@yahoo.com
Posted by Beth D. Carter at 6:13 PM