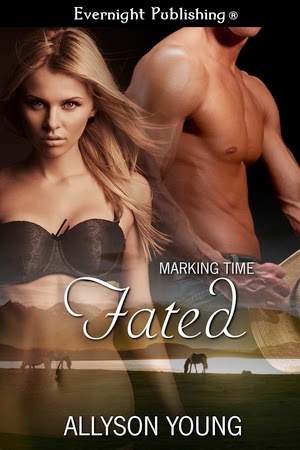 Welcome back, Allyson!  Thank you so much for visiting Written Butterfly again!  I read Destined and loved the world you created with Sinclair, Ashton & Craig.  I’m looking forward to the next book.

Q) You mentioned the second book will be about Sinclair’s friend, Candy.  Who will be featured in the third and final book?

A) The third book explores the growth and development of Sinclair, Craig and Ashton’s relationship, as well as Candy’s and her Sheriff. It also describes the friendship that evolves between the five of them—purely platonic! (So far.) I’ve tied up some purposely dangling threads too.

Q) Candy seems to be a little tougher than Sinclair.  What type of heroine do you prefer to write, the demure girl or the take-no-shit female?

A) I prefer feisty females. But I write alpha males and something has to give! I try to make it a reasonable compromise and make sure that there’s some groveling if the guys screw up—and when don’t they?

Q) Out of this series, who was your favorite character?

A) I had to think long and hard on this. I was torn between Candy and Sheriff Reece. Candy because money didn’t bring her happiness, and Reece because he’s a military man. (I probably don’t need to say anymore!)

Thanks for having me back and wish me luck with the third book—although I can envision a Christmas novella in a year’s time complete with babies. ☺

It was great to be here. Ally

Reece Murdoch is back in Barrister, Wyoming after his military tour. Ostensibly returning to take the position of Sheriff, he plans to confront the woman of his dreams. After what they’d shared, he’d foolishly believed Candace Grant would wait, but all his heartfelt letters were met with silence. And now she is avoiding him and freezing him out.

Candy Grant is never going to allow Sheriff Murdoch a civil conversation, let alone a discussion. Oh, he’s interested—probably thinking he can waltz right back into her life. Except he’d gutted her, leaving six years earlier without warning and only eight scribbled words. She’s since lived a fast, shallow existence she’s determined to continue, and never get hurt again.

Reece needs a plan, one to address Candy’s propensity to speed while asserting his lawful authority—with handcuffs and a night of house arrest. Will the truth set them free?


EXCERPT
Reese Murdoch slouched comfortably against the broken-in seat of the county’s second best cruiser, gripping the wheel with one big hand. He was headed home after a day in court at the county seat, testifying against some poor excuse of a criminal who’d thought to rob the lone bank in Barrister a few months previous. The guy had used a flare pistol for Christ’s sake, and was so intoxicated he’d dropped it—twice—before the manager smacked him upside the head with a decorative statue enshrining one of the town’s founders. Louisa Bennet had a wicked swing, because the would-be thief hadn’t woken up for two days.

He found himself sighing. Barrister wasn’t a bad place. Born and raised there, he knew pretty much all the inhabitants, as well as those living in the surrounding area, except for the ones who’d arrived while he was overseas. Being elected as Sheriff had been a no brainer, his being a military man home from Iraq and all, presumably well versed in weapons and leadership. Both true, except he was hampered by a paltry budget, and the people he’d sworn to serve and protect were scattered over a huge part of the state. Good thing the work wasn’t onerous, the abortive bank robbing being the biggest thing to happen in his tenure thus far.

No doubt that would change over time, people being what they were, but he was bored for the most part. The one thing—person—who could easily obliterate that boredom didn’t deign to recognize either his existence or his authority, and he hadn’t decided which plan to pursue in that regard. It had been months, but if he’d learned anything in the military, it was that an offensive had a better chance of succeeding if one gathered solid intelligence and formulated a careful plan of attack. He wryly admitted he’d come home because of Candace, if only to determine why she’d ignored all of his efforts to get in touch with her over the years. Some might call it closure. He just plain wanted her, and knew enough about women to know that while her demeanor said one thing, something else was operating behind that icy exterior.

In the meantime, there was the odd drunk and disorderly to deal with, complaints about cattle rustling to investigate, a few domestics—and didn’t he hate those—and some traffic violations.

The road dipped to accommodate an arroyo, and he rose up out of it to crest the slight hill. And speaking of traffic violations, the unmistakable silver Bimmer hammering in his direction, trailing a dusty rooster trail, caused him to grind his teeth and war with his responding arousal. Damn her. She was going to kill herself one day in that stupid car, maybe before he put the final touches on his plan. He supposed he should be grateful Candace hadn’t bought the convertible version. Flipping on his lights, he considered his strategy, noting the way the smaller vehicle’s hood dipped in response to the application of brakes. She’d been flying along.

She pulled the Bimmer over, and he drifted on by, to pull a three point turn and come up behind her. Candace hadn’t made eye contact at all, staring straight ahead through the windshield, and he figured she had to know it was him. She didn’t cut his two deputies dead when they either spoke or approached her. As he parked he reached for his hat, running a finger along the brim, before exiting the vehicle. He took his time settling it on his head, watching Candace’s profile in the side mirror, willing his professionalism to the fore when all he really wanted to do was drag her back to the cruiser, handcuffed, and take her home with him. Someplace safe—and easily accessible for both their pleasure. The plan suddenly came together.

Approaching the open window, he spoke in a matter-of-fact tone. “You were hitting seventy, Candace. We’ve had this discussion before.”

She didn’t reply, instead thrusting her paperwork toward him. Her picture on the license didn’t fit with the stony visage looking dead ahead. Despite the customary, don’t smile, hair tucked behind your ears, dictates of the DMV, Candace’s full mouth, with its eminently bitable bottom lip somehow quirked up at the corners, and there was no mistaking the sparkle in those baby blues. Just as he remembered her—full of life and joy, bubbly, vivacious, and all those adjectives people applied to her. But then, he’d admit he’d hardly given her anything to smile about, primarily because she wouldn’t give him the time of day. That was gonna change.

Tugging the license and registration from her stiff fingers, he decided to play her game. “Step out of the vehicle, Miss Grant.”

That garnered him a wary look, a quick glance that she instantly modified into boredom. He didn’t miss the way she flickered her eyes to her watch. Was she meeting someone? On her way to a hot date? Sheridan lay in that direction, and whatever Candace got up to, she didn’t do it in Barrister. The rumors he’d overheard flourished, of course, in a town that throve on gossip, but her father’s money and position served to feed such things. Resentment and bitterness always lurked beneath the superficial, often fake, regard, when people were beholden. Reece had access to a different form of contacts and knew the truth of some of those rumors. He wasn’t surprised about Candace’s interests, merely disappointed he hadn’t been able to guide her and take the journey with her. But he’d done what he had to back then. That she hadn’t accepted his explanation and apology, wouldn’t even give him the opportunity to discuss it further, grated him raw.

He opened her door and stood back, breaking procedure, instantly grateful for the way the door frame concealed his sudden erection, his cock saluting the vision emerging from the Bimmer without any regard for his bigger brain. The top she wore, if one could call it that, as it hardly covered her attributes, cried out for him to touch the silky fabric and tug on those discreetly concealed laces. The length of shapely leg revealed by the short skirt flirting around her thighs forced his hands to grip the metal until he thought it might groan beneath his grasp. Better it than the sound he barely managed to swallow.

Once again his woman was on the prowl, no matter if she didn’t know she was his. He was damned if he’d let her take what she was offering up to Sheridan or any other place loaded with men who couldn’t possibly appreciate her the way he planned. Disappointment again soured him, and he impatiently shoved it aside. He’d waited long enough.

“What?” A hint of nervousness whispered through the aloof question.

“This is the third time, Miss Grant. I assume you recall what the consequences are for speeding. Three strikes.”

Narrowing, blue eyes locked with his own, and then a flush of pink colored her décolletage and rose up the long, lovely column of her throat to paint her cheeks. She spoke between set lips, and he thought to tell her that it was criminal to thin that lush bounty, another crime she’d have to pay for in the end. He’d keep adding them up.

“Give me the ticket, Sheriff. I’ll pay it like I did all the others. Help out with your salary.”

And in case you missed book one of Marking Time.... 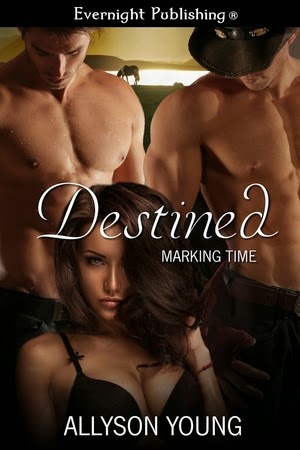 Craig and Ashton Russell practice ménage. They are honorable men who’d never compromise a woman, especially their foster sister, no matter that she is finally home from college. Despite how much they have missed her.

Sinclair Renton grew up several years behind the brothers, most certainly never regarding them as siblings. And, being well aware of their sexual predilection, of late she has set out to convince them she’s the one woman they need.

Devastated, her plan in shambles, Sinclair leaves, unable to imagine the men she loves with another. Shocked into admitting their true feelings to each other, the brothers try to pick up her trail. Can they capture Sinclair, bringing her home into their love and their hearts, where she belongs? Or is it too late?