Q & A with Elyzabeth M Valey! 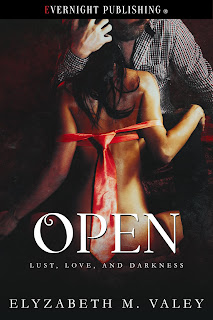 Hello Elyzabeth!  Thank you so much for visiting Written Butterfly with me today!  It’s such a pleasure to chat with you.  So tell me…

I love all the books I’ve written but I seem to have developed a soft spot for The Beauty of Forever,  my vampire Christmas story. I’m just in love with Christopher, the hero.

Hum. A bit of both really. Lately I find myself writing in a more linear fashion, but I’ve also written inspiring scenes and then built the story from there.

When I write a series, I try to make them so that each one stands on its own and readers can pick up any book in the series and feel as if they’re not missing out on anything big.

I’ve just signed a contract with Evernight Publishing for book 4 of the Alpha Protectors series, titled, Killian’s Hope, and I’m working on book 2 of Lust, Love and Darkness, which will be Becky’s story. (She is mentioned in Open).

One day she’d be his.

Almost a decade ago, Marcus Grimes worked as a bodyguard to a man who didn’t deserve the woman he’d had. When she finally left, Marcus vowed to eventually find her and make her his.

The time is now.

All she has to do is open.
After leaving an abusive relationship, Gabi moved cities and reinvented herself. Now, she’s confident and capable of playing with any Dom she sees fit without compromising herself or her emotions.

Until she meets Marcus Grimes.

There is something familiar about him, which should have stopped her, but instead spurs her on, and before she realizes it, Marcus is not only opening her body to his exploration, he’s also delving into her heart.

However, when their mutual past comes to light and everything she’s fought for during the last eight years is jeopardized, will she close herself off again or will she give love an opportunity? 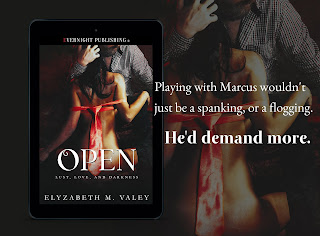 
Marcus sipped at his soda, wishing it were something stronger so his libido would subside. Who was he kidding? Looking at her would get him aroused regardless of the amounts of alcohol he drank.


She was perfect. Everything he’d ever fantasized about: luscious curves, ample bottom, tits which would fit his hands, and a mouth made for sucking and screaming out his name.

Gabi. Her last name was of no consequence. Neither was her first name. Years ago, he’d known her as Abby. What mattered was that when he made her his, he’d refer to her as “kitten”. He’d called her it once, by accident. The term had come naturally. Back then, she had been vulnerable, small, like an abandoned pet. Now, however, he stood in the presence of a different type of cat. She was graceful, strong, seductive.


Unfortunately, unlike cats, which tended to be more snobbish when it came to choosing an owner, Gabi played with just about everyone. She was a regular at the BDSM club where he’d found her. One night, he’d see her getting a spanking, the next, a caning, and another day, she was being whipped. There didn’t seem to be anything Gabi wouldn’t try, except sticking with the same partner. She had a different Dom every weekend, playing with them at a distance, never really giving in to the experience. He knew why, and he was determined to change it. Starting tonight.


Currently, she was tied to the Saint Andrew’s cross, and Master Eric was giving her a good flogging. The Dom played her like an instrument, knowing exactly where to hit to make her skin tingle but not bruise. Marcus scowled. When they played, he’d make sure to mark her so every time she sat down, she would remember him and how her body had yielded to her Dom’s touch.


Marcus downed the last of his drink and moved closer to the cross. It’d been close to eight years since he’d last seen her. Eight years. He sometimes thought they had been wasted years, but deep down, he knew they hadn’t. After what she’d gone through, she’d needed the time to heal and become the person she was now.


One look at her and he’d made up his mind. Gabi would be his. Permanently this time. He’d bided his time, investigating her present, trying to find out more about who she was today. Every weekend for the past month, he’d come to the club and watched her. He’d leave with a hard-on and a desperate craving to claim her.


Tonight would be different. Eric was almost done, each stroke of the flogger turning into a caress until it came to a full stop. Gabi shuddered and hung her head. Marcus stiffened. Was she okay? Eric seemed to think the same because he hurried forward and whispered in her ear. Gabi nodded. Eric chuckled. Giving her ass a light tap, he began to undo the restraints.


Marcus clenched his fists. Soon, he’d be the only one spanking Gabi’s behind. He waited patiently for them to finish. His heart hammered in his chest, and sweat gathered at his nape. He hadn’t been so on edge in years.


Finally, Gabi became free and turned around. Marcus’s breath caught. She wasn’t naked, but she didn’t need to be to get his dick hardening. He focused on her mouth. Wide with plump lips. How many times had he fantasized about having them around his dick? Fucking her mouth. Marcus swallowed a groan.


Eric blocked his view, stepping in front of Gabi to give her a hug. She smiled politely, but there was no affection in her gaze. She was merely being civil. Marcus smirked. They wouldn’t end their sessions with a friendly pat. Finally, Eric left. Before Gabi could also leave, Marcus approached her. She saw him coming, her gaze narrowing and her lips parting into a coquettish smirk. He couldn’t wait to make it sincere.


“And you don’t want me to call you Sir or Master? Do you prefer Daddy?” She ran her fingertips across his forearm making goosebumps sprout on his flesh. Marcus pulled away.


“If the men you’ve been playing with require you call them Sir after barely ten seconds of interaction, you’ve been hanging around the wrong people.”


She shrugged, her gaze dipping then just as quickly meeting his again.


“So, why are we having this conversation, Marcus?”


Gabi quirked an eyebrow. “And you don’t want me to call you ‘Sir’?”


He grabbed her wrist. Her eyes blazed.


“Forgive me,” Marcus apologized. “You’re right.” He stepped into her personal space, forcing her to tilt her head to look at him even though she wasn’t much shorter. “You have to understand, Gabi, I don’t want to play with you right now. I want to get to know you a bit before I make you kneel at my feet, open up that pretty little mouth of yours and stuff it with my cock until you gag.” 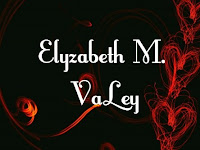 Elyzabeth M. VaLey is a writer of sizzling, sexy romance who firmly believes in happy ever after.  From paranormal to contemporary, fantasy, or historical, she enjoys exploring her characters' darker side and writing stories about tortured heroes, strong heroines, and all that comes between them and their love.

When she's not writing, she can be found walking in the Spanish countryside with her black Lab, exploring castles, or enjoying some tapas with her friends. 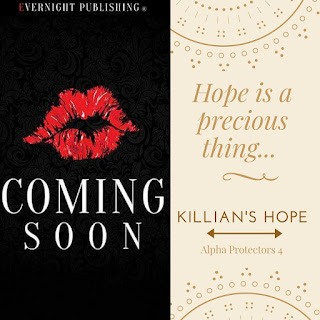 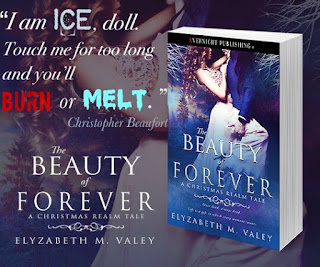