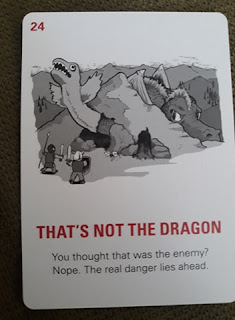 No one ever checks to make sure the bad guy is dead. And he never is. It's an old trope that is ALWAYS used, and it's not exclusive to the antihero. Even the good guy on occasion is thought to be dead, only to pop up again at the right moment.

Another cliché is the old "that's not a knife, this is a knife" scenario, meaning the first bad guy isn't the real BAD GUY. The trick I like to put into my stories is who is the real bad guy? I like to give misdirection to the reader. You think it's one person, or one situation, but in reality, it's this person whom I mentioned very briefly at the beginning. If you are going to throw this misdirection, however, make sure to put very subtle clues throughout the story, so the reveal at the end is a surprise.

You thought that was the enemy? Nope. The real danger lies ahead.


>Bait the trap. List three things that could be used to lure your hero to danger.

> Picture the puppet master. Who could be pulling the strings? What would he gain by remaining hidden? How could your hero discover him?

> Heroes can have puppets, too. Brainstorm deceptions your hero could use to confuse or delay the enemy.


The best villains often hide behind henchmen and facades. Your hero might believe she has defeated the enemy, only to discover he's stronger than ever. Or perhaps, like The Wizard of Oz, there's a man pulling levers behind the curtain.

Look for reversals. Can the supposed enemy be turned into an ally? Has your hero been an unwilling toll of a greater evil? Was the whole thing a trap, or just a delay?

Even fake dragons have teeth. Let his bite count. 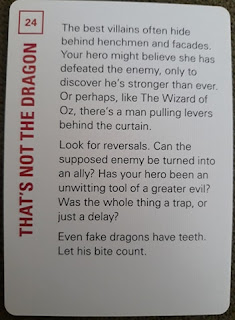