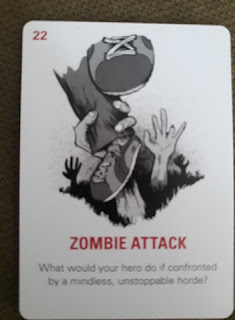 When The Walking Dead became popular, there was a burst of books about a zombie apocalypse. I read a few great ones (Jenika Snow, Kylie Scott) and even wrote one under my pen name.

They also provide a great opportunity to let your imagination run wild, because a zombie horde doesn't have to mean the undead. You can set the apocalypse in literally any situation: office, courtroom, military, highschool, etc. Zombies are a great metaphor. The more shit you thrust your protagonist into the better, because the drama writes itself.

#22 Zombie Attack
What would your hero do if confronted by a mindless, unstoppable horde?

>Brainstorm some experts your hero could consult. If this happened before, how did

> Does the horde have a leader? Is there any way your hero could take over that spot?

> Make it personal. let someone the hero loves join the mob.

> Zombies wants brains. What does your crowd want? If they got it, would they disperse or grow stronger?


"Zombies" don't have to be the walking dead. From soccer hooligans to snotty seniors to social media swarms, there are mobs in every genre. Unlike individual adversaries, crowds can't be confronted or reasoned with. Your hero may need to flee or take shelter - perhaps with other survivors.

Whether real or metaphorical, all zombies have weaknesses, and it's up to your hero to figure out what those are. Perhaps there's even a cure. But finding it won't be easy. 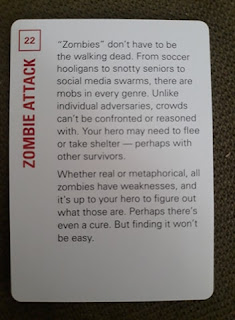