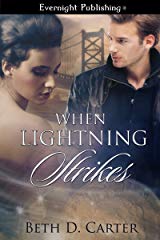 Micah John drifts through life relying on his ability to count cards in the seedy underbelly of .  One bad turn has him owing a hundred thousand to an unscrupulous loan shark, with only a week to come up with the cash.  He doesn’t have time for much of anything, except working and worrying.

He sure the hell doesn’t have time for a woman claiming to be from 1794.

Henrietta Knapp is trying to wrap her brain around the fact that she’s out of her time.  A bolt of lightning has brought her more than two hundred twenty years forward.  Why? She doesn’t know. Not until Micah John appears.


As mistrust and fear drain away, Micah John and Etta find a love that outshines the bad and the ugly.  But will they be given the chance to hold onto a happy ever after, or will the lightning strike again? 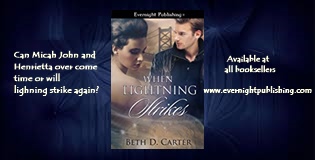 Lightening zapped overhead, charging the atmosphere.  After one more deep drag he tossed the cigarette down and crushed it under the sole of his shoe.  Suddenly, the hair on his arms stood up, electrified as the air became thin, but not like it had felt suffocating in ’s grip.  No, this time everything pulled and stretched and flattened, all at the same time.  His lungs compressed, his nostrils flattened, and a buzz roared in his brain.  He cried out from the sharp pain and slammed his hands over his ears, trying to block out the weird distortion that was turning his insides to mush. He looked up and realized he was under an electricity pylon and the hum from the volts grew louder and louder, making him wonder if his eardrums had busted.  A second later, lightening hit, causing the thing to explode with a tremendous boom which had him flying back to land in an ungraceful heap.  Thousands of sparks cascaded down upon him, and he flinched at the small brush burns.


And then all was still.


The hum was gone, but then so were all the lights.  Quiet descended and he pushed himself up to glance around.  No traffic lights, no street lights, nothing.  He stood, not sure what to do, because something was different.  Everything was…off.


A whimper had him twirling around, searching through the darkness of the alley, but he couldn’t make anything out.  So he walked over to his car, opened the door, clicked on the battery, and turned on the lights.


She hovered against the wall, eyes wider than they should be.  Blue maybe, or green.  It was obvious she was terrified by the rigidity in which she stood there.  He didn’t blame her one bit.  The damn exploding transformer had scared the shit out of him too.


She didn’t say a word, just stared at him like he was some sort of monster.  He gave a self deprecating snort.  Maybe he was.
Posted by Beth D. Carter at 1:00 AM