Flashback Friday...Stepping back into the Roaring Twenties 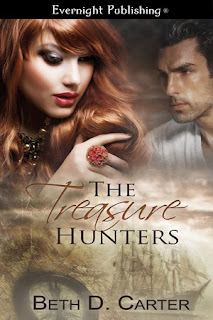 When the stock market crashes on , it doesn’t take long for Ruby Talcott to lose everything.  Her father’s shipping legacy slips through her fingers.  Alone, destitute, she packs up her two best friends Eden and Merridie, and takes them to for a new life.

Working in her family’s warehouse of unclaimed cargo, she foils a plot to steal a map.  But this isn’t just any map…it’s to a lost pirate treasure.  Ruby takes the map for herself and convinces Eden and Merridie to go with her to find the priceless treasure.

She finds Captain Sinclair Dardon, a man also hit hard by the economic turn, to sail them towards adventure.  But Ruby didn’t count on her wild attraction to the handsome Captain.  Nor did she expect he has his own bad guys hunting him.

“How could you sell all the shares?”
“Miss Talcott, the market lost eleven percent of its value at the opening bell.  It was a mutual decision of the shareholders,” he explained, yet again.  She must have asked that question a dozen different ways but she still couldn’t quite understand the shareholders massive betrayal.  “It was the only thing we could do to break even.”
Ruby spun around angrily, her hands clenched in tight fists.  “You panicked over an unsteady market that would have rightened itself!”
“You don’t know that.”
“I own this company!”
Mr. Densey only shook his head sadly.  “You never owned this company.  And now you don’t belong here.”
Ruby marched up to him and bent, staring at him nose to nose.  “My father branched this company into a thriving corporation when investors laughed at him.  I know more about shipping than any of you and I’ll be damned if I let it rot!”
He looked at her so calmly she wanted to hit him.
“What can you do, Miss Talcott?  You’re a woman.  It’s out of your hands now.”
Ruby felt seething frustration flash through her and she wished she could wrap her hands around his neck and squeeze.  How dare he sell it!  She wasn’t the majority shareholder which meant her father’s legacy had been pulled out from under her, so basically she had no recourse.  Nothing.  It was all gone in a flash.  Before she could inflict bodily harm, she turned and marched out the door, letting it slam shut behind her.