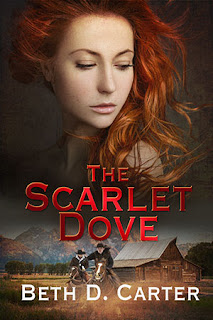 Today is my release date for The Scarlet Dove! This book is one of my favorites that I've written. It's got a kickass heroine as well a lot of humor.


1.      Please tell us a little about your new release (The Scarlet Dove) without giving too much of a spoiler away.

First of all, it’s a historical ménage romance set in 1888. It’s about a woman trying to find her place in a male-dominated world that has set parameters for how “proper” women should be.

2.      Did you found any cool tidbits in your historical research for this book?

So a lot of this story is about my heroine, Liza, and her desire to find her place in the wild west. She has a wild dream of becoming a doctor. I did a lot of research on if that was a possibility. I always try to use historical characters in my stories, if possible, and I was able to incorporate some of that into The Scarlet Dove.

3.      Was it difficult getting the heroes to a point where they could let their guard down and be open to the possibilities of love?

My two heroes, Blue and Apollo, are cousins. They’re tracking a dangerous killer and abductor of women. When they come across Liza, they’re unprepared for their attraction to her. I think it confuses the hell out of them and their jealous of each other. A ménage relationship isn’t in their radar at all, so love takes them by surprise. It wasn't easy getting them to that point, however, and it took a good 'ole fight to make them see the light.

4.      How did you find that great balance between conflict and romance?

Conflict can intensify emotions. I like using it to develop a bond between the characters.

Can Liza find her place in a lawless world?

When Liza Trent decided to become a mail order bride out west, she never imagined her fiancé would die before she arrived. His death places her in debt, and the only way to pay off the money is by auctioning off her virginity against her will. When she’s rescued by two handsome men, she mistakenly thinks they’re assassins. Despite her reservations, she accepts their protection.


Only the two men, Apollo Beck and Blue Hawke, aren’t assassins. They’re Texas Rangers sent after a man who preys on women, and their dangerous hunt has just brought Liza into the line of fire.
Confused with the attraction she feels for two men, Liza has a difficult decision before her: commit to loving Apollo and Blue or commit to her burning desire to become a doctor…unless she’s found and taken for revenge first.

Liza grabbed one of the candelabras resting in front of a mirror and flung it onto the bed. Apollo jumped back as the sheer drapes erupted in a ball of fire. Mrs. Violet screamed, but he could no longer see the mezzanine because the fire on the bed blazed out of control, spreading up the paneled wall and moving fast. Smoke filled the room, and Liza coughed as she rattled the doorknob.

He grabbed her arm, but she struggled to break his hold.

“Stop it!” he growled. “We have to get out of here quickly or the smoke will overwhelm us.”

Apollo lifted his booted foot, and with a mighty kick, he knocked the handle loose. The door opened easily, and he raced out with Liza on his heels.

Thick smoke followed after them, hovering near the ceiling. The sudden fuel of fresh air caught the fire and flamed it out of control. Their audience was nowhere around, and he assumed they had already found their way out.

He grabbed Liza’s hand and raced down the stairs to the foyer. The possibility of the roof collapsing flashed through his mind. He hurried to the front door and saw it bolted shut. He tried busting it with his shoulder, but all he got was a bruised arm.

“Shit!” he yelled, grabbing it. He tried again with his foot, but the thick door wouldn’t budge.

“There’s a side entrance,” Liza said. “It’s locked too, but it’s not as heavy as that one.”

She spun and ran, and he followed after her, rubbing the tender spot on his shoulder. They made their way around the side of the stairs and through an empty kitchen. Blue waited for them in the open door.

“Good timing,” Apollo muttered as the three ran from the building, down the side alley, and onto the wooden sidewalk of the main street. People had gathered, staring at the massive, three-story building, the second and third floors now ablaze in the dark night.

“What the hell did you do?” Blue yelled.

The house was burning fast.

“She set the bed on fire,” Apollo huffed, coughing from the little bit of smoke he had inhaled.

Blue raised his eyebrows as he swung around to look at her.

At that moment the men from the auction burst from the side of the house, coughing and stumbling as bystanders ran to help them. Others went to help put the flames out, which were now spreading to the next building. For a moment, chaos ensued as animals shied away from the heat and people raced to contain the fire before it spread.

“You!” An angry voice bellowed from somewhere in the mess of everything. Reynolds came charging at them, a single-shot derringer clutched in one hand. Apollo and Blue stumbled back, dragging Liza with them.

“It’s him,” she whispered in a hate-filled tone. “The man who tricked me.”
Bio & Social Media Links: 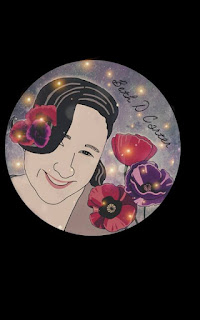 I like writing about the very ordinary girl thrust into extraordinary circumstances, so my heroines will probably never be lawyers, doctors or corporate highrollers.  I try to write characters who aren't cookie cutters and push myself to write complicated situations that I have no idea how to resolve, forcing me to think outside the box.  I love writing characters who are real, complex and full of flaws, heroes and heroines who find redemption through love. I love to hear from readers so I’ve made it really easy to find me on the web: