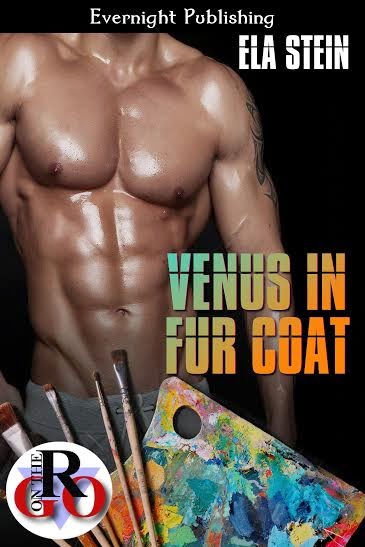 Hi Ela!  Thank you so much for visiting Written Butterfly with me today! Wow...this cover is amazing!

First of all, thank you so much for having me here today! “Venus In Fur Coat” is a bit of a rarity of me – it’s a contemporary romance and I’m more of a sci-fi/fantasy type of gal. But when inspiration strikes, you don’t ask questions. The idea for this story came to me fully formed, which was kind of cool. I also love the art aspect in it – I’ve painted and drawn my whole life, and more recently (well, like the past 10 years at this point), have done a lot of scrapbooking. So I’m a bit of an artist at heart, and I really identify with Derek. And I also identify with Cara, who has a very practical streak to her. After all, I did set all my artsy stuff aside to pursue school and a more traditional career. So I guess one could say that they both have different aspects of my personality… and it was kind of cool watching them come together :)

Honestly, the idea for the story just kind of hit me out of nowhere. Also, for Derek, I sort of had that sexy image of Jack drawing Rose in Ttanic (although Derek doesn’t look anything like Jack). And I also had this image stuck in my mind of an ad I found maybe 20 years ago and saved in my diary - it was a woman painter about to get it on with her (super sexy) nude model. So yeah… plenty of inspiration there!

Having something to drink as I work usually helps (not THAT kind of a drink :) I’m just more of a liquid snack type of person. I also like to watch music videos - they’re usually very visual and artistic and get me into that mind set. I also like to browse images and I loveee my Pinterest! I have inspiration boards up for several of my works - just browsing those helps me get into the right mindset.


Blurb:
Cara is an accounting major in college, and she is practical, a little cynical, and focused on her studies. When she allows her roommate to drag her to a frat party, the last thing she expects is running into the artsy-bad-boy type who tempts her to throw all her typical reservations out the window.

Derek tends to go with his feelings—intense and passionate, with a strong alpha streak. It will be up to him to bring Cara out of her shell and help her experience life to its fullest. Both of them feel that special spark, and one passionate night could change the course of their lives forever.

Excerpt:
Derek followed her through the hallway. She was already walking down the street, away from the house by the time he made it outside. He watched her walking away, debating whether he should approach her now. It was dark out, and he didn’t want to freak her out by seeming stalker-ish. But then again, if she was going to be walking around alone at night, she’d probably be better off with a friendly stalker keeping her company.

Having decided, he set off at a light jog to catch up with her. She wasn’t too far ahead, likely slowed down by her high-heeled boots. His cock had responded as soon as he first laid eyes on her, standing there all timid and uncertain, and now that he could see her ass wiggling as she walked, he grew painfully hard. His jeans were not designed to accommodate a huge hard-on. He adjusted himself just before catching up to her.

She was everything that turned him on in a woman. Curves in all the right places, so voluptuous that he could just imagine himself sinking into her, her soft cushioning against his own hard planes. Her hair had an adorable bit of frizz to it, and she wore it pulled back from an angelic face. The face of a goddess. A face right out of ancient paintings by the great masters.

His boots crunched on the gravel and she stopped and turned around. His heart picked up speed when their gazes met again, and he was glad he followed his gut. No way was he giving up until he got to know her better. Dating just for the hell of it was starting to lose its appeal. If he was honest with himself, he’d had his fill of it for a long time, but until now, no one had come along that made him want anything more serious.

“Hey.” Maybe not the most eloquent way to start the conversation, but she stood staring at him with wide eyes and a startled expression, waiting for him to say something.

“Hi.” Her voice was a whisper. The wind picked up speed and rustled through the leaves in the trees around them, as though echoing her.

“It’s not safe to be walking around alone at night.” Criticizing her choices, right off the bat, probably wasn’t the greatest way to make an impression, but it had been a pretty bad move on her part. Even if she wanted nothing to do with him, he didn’t like the idea of her walking around alone at night. There were too many assholes out there, and it just wasn’t safe.

She raised a brow in response and crossed her arms across her chest. He guessed that was her pissed-off look, but it was somewhat spoiled by how hot her tits looked pushed up that way.

Reading was my entertainment and salvation as a child, and it transferred into a passion for writing. I am still very much a reader, and love many different genres, from erotic romance, to fantasy (and dark fantasy... Game of Thrones, anyone?), to historical fiction, and that love is reflected in my own writing as well. If you'd like to learn more about me, or chat about books and life, you can find me all over the web. I’d love hearing from my readers. You can find me here:
Website: www.ElaStein.com
Blog: http://elastein.blogspot.com
Twitter: https://twitter.com/Stein_Ela
Facebook: https://www.facebook.com/ela.stein.735
Pinterest: http://www.pinterest.com/elastein/
Goodreads: https://www.goodreads.com/author/show/8142001.Ela_Stein