Hello Elizabeth!  Thank you so much for visiting Written Butterfly!  You are a brand new author and I'm honored that you picked my blog to showcase your first book! 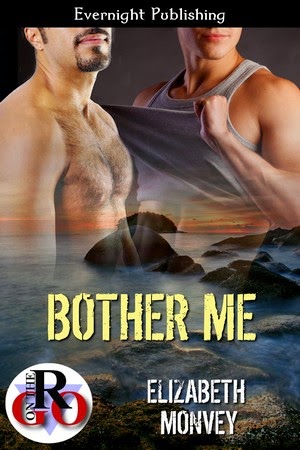 Thank you so much for hosting me!

Living in Los Angeles, I've had my fair share of earthquakes and I've always made a joke that if I was in an apartment building, I'd want to be on the top floor so if the building came down I wouldn't have that much rubble on top.  Gruesome, I know.  (I'm a secret Investigation Discovery addict)

But that led me to dream about two lovers separated by an earthquake so that's how I dreamed up Tighe and Scotty.  The rest just fell into place and I'm super happy that this book is the first one for me being published.

Coffee.  Music.  I have a young child so I'm used to working through distraction.  I get ideas for stories all over the place so I always carry pen and paper with me wherever I go.  Sometimes I jot things down and then come home and type it up.

I am working on a series for Evernight titled "My Boyfriend Is..." .  It's Romance on the Go stories (about 8-12 thousand words) of men who find out they have a supernatural boyfriend.  So far there's My Werewolf Boyfriend and My Vampire Boyfriend.  I just submitted My Alien Boyfriend (fingers crossed it's picked up!).  I have a bunch more of these stories up my proverbial sleeve.

Thirty-eight year old Tighe Valentine has moved to Los Angeles to help care for his ailing mother.  His next door neighbor, Scotty, lives a carefree life of surfing and beach parties and pretty soon, Tighe starts wondering how in the world a much younger man managed to capture his fascination.

For Scotty Tilden, Tighe is his dream man, if only Tighe would see it his way.  But his sexy neighbor is stubborn and in denial of his true sexuality which is in contrast to how Scott lives his life.

And then the world turns upside down as a devastating earthquake rips everything apart.  As Tighe searchers desperately for Scotty, all he can think about and pray for is finding alive the man who’s stolen his heart.

As he gathered up the equipment he needed for the work ahead, the horses began to neigh and dance around in their stalls.  He stopped and checked them out, as did the other workers, but the horses distress only increased.
A second later the earth began to shake.
This wasn’t some minor thing.  Even not knowing a thing about earthquakes Tighe knew this was big.  He was knocked off his feet and he grabbed one of the stall walls in an effort to keep himself upright.  It was a loosing battle and down he went, as did half the barn.  Men were yelling, horses were screaming, and to Tighe it seemed like the world was ending.  The rolling waves lasted forever as he was battered with wood and debris and all he could do was cover his head and pray that the rollercoaster ride ended soon.
And then just like that, it did.
His stomach, however, was still quavering as he pushed off the rubble and got to his feet.  There were moans and groans coming from various piles and he moved mechanically, helping men detangle themselves.  No one seemed hurt worse than some cuts and scrapes but two horses were hurt bad.  The others had escaped the barn and were currently running around wild, clearly frightened out of their minds.  When the next earthquake it, it wasn’t as strong and Tighe was able to stay on his feet.  It only lasted a few seconds, however and things were still once more.
“This isn’t going to go on forever, is it?” he asked one of his co-workers.
The man shook his head.  “After shocks.  Might be a few more, might not be.”
Tighe dug out his cell phone but there wasn’t any signal.  Something that powerful must have knocked out a few cell towers.  His first thought was his mother.  The second thought was Scotty.
“I have to get back to the city,” he told everyone.  “I have family.  I have…”
He was going to say a boyfriend, but Scotty wasn’t really his boyfriend.  He could’ve been, but he’d fucked up.  What if something happened to Scotty?  Oh God, he couldn’t seem to stop fucking up.  He had to find him.