A Down Under Chat with Faye Hall! 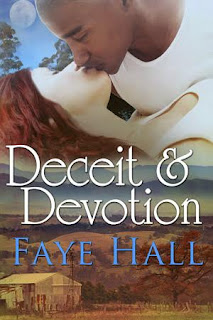 Q) How did you dream up the dynamics of your characters?
I love writing about brooding men, those who struggle to express their feelings for fear of getting hurt.  Jarrah, the leading male character in Deceit & Devotion, is a perfect example of the wounded male who struggles to appear strong and independent, whilst inside he’s hungering for the love and affections of a woman.

As for Emily, the female main character, she is struggling to survive in a very male dominated world.  I didn’t have to dream too hard to imagine what such a life must have been like, as it was the world so many women lived in during the 19th century.

Q) What gave you the inspiration for your book?
My main inspiration for Deceit & Devotion came from my husband.  He mentioned that even though there are always tidbits of Aboriginal culture in each of my books, there had never been a main character that was native to Australia.  He suggested that I write a story about the interracial relationships that were once frowned upon in our country.  We were both aware of the scandal that would have happened back in the 19th century should any white settlers have developed a romantic relationship with an aboriginal.  The discussion carried on from there until I pretty much had the rough draft of the new manuscript written.

Q) Do you plan all your characters out before you start a story or do they develop as you write?
I usually do a rough plan which mainly includes physical features in a notebook that sits beside my computer.  The rest – attitude and reactions – usually just develops as the story does.

Q) What are your upcoming projects?
I have an upcoming release in May 2017, Amorous Redemption, which is roughly based on my great grandparents lives when they first moved to Australia.  Another project include a single title, Heart of Stone, a story involving a tangled love story between an Australian slave trader and an Irish slave.  I’m also several books into what will ultimately be a seven book series incorporating deadly sins and heavenly virtues.

Deceit and Devotion by Faye Hall

“I will pay you to sleep with my wife.”

Jarrah Miyan, a young half-caste aboriginal man, is supposed to seduce a white woman into an affair so her greed-driven husband can gain full control of her inheritance, including the rare collection of black opals she keeps under lock and key. When he walks into the study to meet the poor chit he’s to take advantage of, he expects to find an aging woman who smells of stale perfume and gin. Who he finds though is the most beautiful woman he’s ever laid eyes on—the same woman whose pale thighs had been wrapped around him just a few hours earlier as she’d begged him to give her pleasure.

After their night of passion together, Emily Holtz doubted she would ever see Jarrah again. To have him standing before her now, asking for employment at her cattle station, was not a situation she had prepared herself for. She agrees to hire him on one condition. He has to spy on her husband and get her the incriminating evidence she needs to apply for a divorce. She’s spent years in a miserable arranged marriage, and she’s desperate to escape. But her husband is a dangerous man, and he will stop at nothing, including murder, to get what he wants.

As they begin to develop feelings for each other, Jarrah worries about what will happen when Emily discovers that he’s been working for both her and her husband. Not that they could ever really be together, as society would never accept that.

Lifting the pillow to his nose, he breathed deep the sweet scent he knew to be Emily’s. His senses instantly responded, his groin aching for the mere touch of her skin against his again.
“My husband and I don’t share a room, Jarrah,” she remarked from the doorway, forcing him to turn around suddenly. “You’ll find no trace of him in here. If you wish to search through his belongings, then you’ll have to go down the hallway.”
“I have already inspected his room,” he replied, placing the pillow neatly back on her bed.
“Then what are you doing in here?”
He walked toward her, his steps measured. “I want to know who you are. I want to know why a woman as beautiful as you was burdened with a husband who doesn’t love her.” Stopping before her, he lifted his hand to her face, his fingers caressing the soft skin of her cheek. “And I want to know what sort of business requires your attention at such a late hour?”
Emily took a step back from him. “You’ll find none of the answers you seek in this room, Jarrah.”
“Then why don’t you tell me what I want to know, Emily?” Jarrah begged, aching to pull her back to him. “Please.”
He watched the beauty of her face as she smiled slightly at him, and for a moment, he thought she might tell him at least some of her secrets. Slowly, she shook her head.
“You don’t want to hear what I have to tell you,” she said firmly as she went to walk past him and into her room.
His hand came out, gripping her elbow, stopping her. “I want to know where you were tonight,” he said again, more insistent this time.
“Why?” she asked, her stare holding his. “Why would you care how or where I spend my nights?”
He felt as if he were drowning in the greenness of her eyes, a feeling so very unfamiliar to him. How was he to explain to this woman that he did in fact care quite a lot about her whereabouts when he didn’t even understand it himself?
“Because…” He paused, knowing what he was about to admit. Never before had he allowed himself such a familiar feeling toward any woman. He hadn’t intended to now either, but studying Emily’s slightly freckled, pale skin, her brilliant red hair highlighting her exquisite features, Jarrah knew he could no longer deny what he was feeling. Letting out a steadying sigh, he knew he had little choice but to tell her the truth. “I care because I don’t want you visiting other men and luring them into your bed.”
She raised her brow, her expression unfaltering. “And is that where you think I’ve been the last couple of hours? Trying to lure men to come home with me?”

Each of her novels bring something symbolically Australian to her readers, from Aboriginal herbal remedies, to certain gemstones naturally only found in this part of the world.

Each of her books tell of a passionate connection between the hero and heroine, surrounded and threatened by deceit, scandal, theft and sometimes even murder.

These romances swerve from the traditional romances as Faye aims to give her readers so much more intrigue, whilst also revealing the hidden histories of rural townships of North Queensland.

Faye finds her inspiration from the histories of not only the township she grew up in, but the many surrounding it. She also bases most of her characters on people she has met in her life.

Faye was able to live her own passion driven romance, marrying the love of her life after a whirlwind romance in 2013. Together they are raising their 9 children in a remote country town in northern Queensland, Australia.