The Amazing Raven McAllan is visiting with me today! 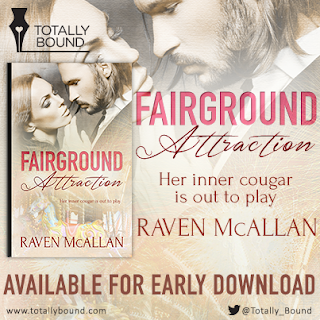 Hello Raven!  Thank you so much for visiting Written Butterfly with me today to talk about your book, Fairground Attraction!  It’s such a pleasure to chat with you.  So tell me…

Q) How did you dream up the dynamics of your characters?
After a chat with a friend one rainy day. We’d taken ourselves away for a no men weekend, and she was reading one of my books on my kindle and telling me to write as she read. (Slave driver) We started reminiscing about old films and men we enjoyed the look of. Tight butts, long hair, blue eyes etcetera.
Over a glass (or two) of wine, we discussed what we wanted to read about in heroes and heroines, our likes and dislikes.
Raig was born from that, and as my friend is ‘a tell it like it is’ gal, Vairi just had to be as is she is.
When I got home, I knew what I wanted to write; I knew the beginning and the end—I just wasn’t sure how we were going to get there. Luckily my characters did.

Q) Can you give a fun or interesting fact about your book?
When my heroine is watching TV, she’s looking at a re-run of a very old semi-erotic show. Nowadays it would be considered very tame, but back then, it was so risqué it wasn’t shown until after 11pm at night! The hero was played by David Duchovny, who was hot, hot, and er hot. It had to be in.

Q) Do you plan all your characters out before you start a story or do they develop as you write?
It honestly depends on them. Sometimes I have the whole book plotted out and it goes to plan. Other times I think I have and oops, those pesky characters will not do as I think and I just have to go with the flow. And also, I sometimes have nothing but a very faint idea of what may or may not happen and just go along for the ride. So far it’s all worked.

Q) How much real life do you put into or influences your books?
I must admit that I love writing books with a setting I know. A lot are set in my favourite places in Britain and I have a couple set in Hong Kong.  (My very favourite city. Put me by the Star Ferry terminus with a book, a gluten free energy bar and a bottle of water and I can read, people watch and make notes for hours) Plus, I have used some other places I’ve visited around the world.
I hate to read a book where the geography is wrong. I don’t mean a house or a made up village, I mean not so litle things like whether somewhere is north or south of somewhere else or a mountain is where it is described. Pulls me right out of the story.
I was writing a sex scene one day and not sure if everythnig could phsically go where I wanted it to. As my DH was away I texted an author friend and asked whether what I described actually was possible. Half an hour later I got a reply—from her husband. Oh yes it is and thank you very much!

Q) What are your upcoming projects?
I’m sort of thinking about a book set in WW1 and the twenties, inspired by one of my relatives. It’s a love story, but with a lot of twists and turns, so it will be a big project to do. Although it will have a lot of poetic license the basis of the story is fact. This relative grew up in London during the war, fell in love with the wrong guy and it took a long while for her to meet the right one. Absolutely fascinating, so if it gets written I must do it justice.
Before then I have another Kera Faire (my dark side) started. It will be a Dark Isle story with a bit of a twist and this time not just set on the island. The heroine is undercover at a glass furnace.

If Raig has his way, this particular fairground attraction is one Vairi will not forget in a hurry. Her inner cougar is out to play, and Raig’s going to do his best to keep it there.
All the fun of the fair—and a hot woman to share it with.
What could go wrong?
Raig thought he was merely helping to give the mum of a friend a good time at the fair.
However, it was obvious Vairi didn’t want to be there, or have a good time. She’d rather be at home with a book boyfriend and a cup of coffee.
They both soon found out, there are good times and good times. How was Raig to know Vairi McQueen was such hot stuff?
Their time together was explosive, but with both of them having secrets nigh on impossible to share, would they ever be able to get together and see where their attraction took them?
Sometimes, Raig decided, you just had to take a chance on life—and love. This was one of those times.

(Raig and Vairi have just ridden the galloping horses at the fair. She insists on calling him Rake.)

“Jeez, Rake, drop the accent, why don’t you. You keep dipping in and out so much I’m giddy. It’s not real, it’s phony. You sound like a stereotypical B movie. Yes?”
He shook his head as he looked at her and replied with not entirely faked sorrow. “That’s where you are wrong. I’ll admit I’ve been piling it on. Lorna said you were a romantic, inspired by sexy accents, and as I’ve been told over the years, the Irish accent is just that, sexy, so I thought, well, why not? To be honest and truthful, the lilt is always there. It’s just been distilled over the years. I resurrected it for you.” He watched her, as she seemed to mull over his statement. He could imagine her dissecting his statement and pulling up to consider the bits she chose to.
“I’ll buy into that. Right.” She took a deep breath and smiled. A look hot enough to split his jeans if he wasn’t careful. A lesser expression than that had started wars, he was certain.
“So, Rake.” The way she purred his name sent his libido sky high and he swore there would be a stain on his jeans. “A good name by the way. Now, what are you going to show me?”
His cock knew what he wanted. It was hard and tight up against the fly of his jeans, straining the zip in its effort to be free of its confines. He was glad Mr. Levi Strauss knew a thing or two about the strength of denim.
“It depends on how much you want to fly.” His accent was now upper class English. “I know what I’d like.” He saw her considering his statement. “I’ll be open and honest. I agreed at first, because of a photo in Lorna’s purse. The pair of you, somewhere sunny.”
“Barbados,” Vairi said, her voice faint. “Three years ago, just before she married. It was my birthday present. We ate, drank, and sunbathed. No sex.”
“Shame.” He laughed. “Does your daughter not understand you are a living, breathing, sexy woman?”
She laughed with him. “Probably not. No girl or woman or, I suspect, male likes to think their mother knows about, you know, sex. Okay, we’ve had the kids, but then? Zilch. Won’t they be in for a surprise when they get to that state?”
He nodded and decided to use the element of surprise to catch her off guard. “So, Vairi My Queen, did you come on the horse? With its rod pressed hard where my cock wanted to be?” He took a gamble and guessed—hoped—she wouldn’t be shocked or offended by his frank speech. Vairi blushed, but no angry words accompanied it. So far, so good. Now he intended to make her less self-conscious.
“I could have done,” Raig remarked frankly. “Very easily. Hard up against your ass, feeling you rubbing against me and that bloody pole. Knowing it gave you more of a good time than my cock was gutting. Gutting. What I really wanted was my cock in you, never mind the pole. I would be your pole. Hot, hard, and fuck you into oblivion. Hear you come. Feel you come. That’s what I want. To feel you milk me to fruition.”
“Ah…” She seemed to struggle for an answer. Vairi stroked her index finger and seared a line down his cheek to his lips, which she tapped twice. “So? Why are you waiting? Be that pole, Rake. Because all I thought about as I got hot and bothered was you. You inside me, making me come. Now’s your chance. If you’re not bothered how old I am, why should I be? Cougars of the world unite and all that. Show me how you’re going to fuck me, Rake. Show me what you want, how you want it. Let me shout and scream for you.” 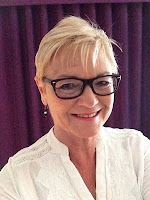