Rose Lange stops by for a chat! 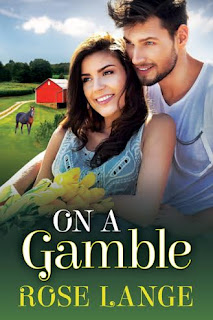 Hello Rose!  Thank you so much for stopping by Written Butterfly. So tell me...
Can you give a fun or interesting fact about your book?
My heroine, Charlie, was named after Charlie Chaplin. She and her dad enjoyed watching Chaplin’s films together when she was growing up.
Old movie and actor references originate in nearly every story I’ve written thus far, from the 1920s through the 1960s. I grew up watching the classics, and it’s turned me into an old movie junkie. I’ve always been fascinated with the past, in terms of dress, language, acting, lifestyle, and just everything. I have old Hollywood crushes on Clark Gable, Jimmy Stewart, Gene Kelly, Robert Redford, Paul Newman, Cary Grant, Rock Hudson, and too many more to name. Heck, I have an entire board on Pinterest dedicated to these handsome gentlemen.
The first time I watched Gone with the Wind I was five, and I was hooked. My Aunt Mary played it for me on her VCR, and when I first saw Clark Gable, I wanted to marry him.  And to this day I can watch and re-watch the film and it still holds my interest. It’s a comfort and an escape.

What gave you the inspiration for your book?

The inspiration for On a Gamble, came from one line, “You’re a woman,” and it’s a line I’ve had saved for years, twelve to be exact. I am a notorious saver, because I knew someday the story would find me. I built the entire premise around that line, and began brainstorming. I wondered why she’d have a unisex name, what it would mean for the story, our hero, how it would evolve and so on.

Do you have any habits that get you in the writing frame of mind?
I do have a set of rituals before I get to work. I turn my desk lamp on, light my candle. My new favorite scent is a Honey Blossom Yankee candle, before that I used a bamboo jasmine scented candle. I always make sure to have my cup of coffee, and a few chocolates next to me. These are musts, especially the coffee! I usually only drink one cup, but if I’m really have a good flow with my work, I’ll go for two cups.

Do you plan all your characters out before you start a story or do they develop as you write?
I love this question, and I would say it’s a bit of both. When I first think of an idea for a story, I write out character sketches and look on Pinterest to find the inspiration, what I envision for them, what they look like. Then I think of what they might do for a living, if they have siblings, family life, and beliefs. But one hundred percent of the time, the character’s traits, personalities, back-stories, everything, emerge organically as I write.
My characters truly do take over the story, and it’s out of my hands, and that’s what makes it so much fun. That excitement has me running back, and ready to work the next day. Because I never know what they’re going to do or say, or think or act, as there personalities lead the way. Most of the time I feel like a spectator.
It’s so wonderful to see though, because that gives me great satisfaction, to see them take this life force of their own. These people that exist only in my mind, to flesh them out, write their story, and watch it take shape. It feels like a miracle each and every time I sit at my computer. They become like flesh and blood people I can picture having a cup of coffee with.

What are your upcoming projects?
At present I’m working on a two book series, which is not yet under contract. The first one features Emma and Patrick, who shared a brief yet intense, weeklong fling on their trip abroad to Greece, and several years later find themselves working in the same office. This book is in the revision stage, but I’m nearing the finish line soon. The second book ties into the first, and features Sarah (her roommate), and Mike (his brother), which will be a Christmas romance. I do have a general idea of the story, and have ¾ of it written.
I have written stand alone books thus far, but the secondary characters in Emma and Patrick’s story were so strong in my mind, that I knew they needed their own romance. I had a light bulb moment when I discovered the Christmas romance I’d always wanted to write, was in fact, Sarah and Mike’s story.
After this series is complete, I’ve been toying with the idea of writing a cowboy romance, and after that the skies the limit!
Each time I finish a book, I fear the well of ideas will run dry, yet each time, I have always found my next story that’s waiting to be told.

Charlie Anderson needs a farm hand. The moment the sexy, mysterious stranger sets foot on her grandparents’ land, inquiring about a job opening, he rattles her senses, her cage, and her equilibrium, the likes of which she’s never experienced before. She never anticipated her scandalous thoughts getting in the way. She’s terrified, but desire trumps fear, and she gives in to a sinful temptation.

Alex McCray has a plan. A plan having nothing to do with romance. His discovery, that “Charlie” is a voluptuous, beautiful woman, leaves him shaken, and he needs to proceed with extreme caution. Working next to her, everyday, stirs up a raw hunger he desperately tries to ignore. And he should, since he has an ulterior motive. Alex should also resist her intoxicating sensuality, but he can’t, because he cannot get enough.

Setting the napkin on her lap, she dove in, licking the tasty treat. Enjoying the sweetness on her tongue, she turned to spy Alex enjoying his as well. He turned toward her, grinning from ear to ear. “You’re right. This is the best custard I’ve ever had.”
Stifling a laugh, she noted a good size dollop on his chin. Without thinking, she leaned in, and swiped it away with her thumb, licking the excess off. “There. That’s better.”
Glancing up, she met his gaze, and swallowed the hard lump in her throat. He didn’t speak, just continued to study her. The act of licking stray vanilla off her finger seemed innocent enough, but the way he looked at her, did not look innocent in the least. A fire lit within the brown depths of his eyes, speeding up her heartbeat. She should look away, but couldn’t. Jesus, what was it about this man that could make her feel this way? So alive, so much unlike herself, and ready to give in and steal what they both so obviously wanted.

Rose Lange has been in love with the written word since she was little. At fourteen, a Julia Quinn novel inspired her to try writing her own. She lives in Southeastern Wisconsin where she was born, raised, and currently lives with her family.

She writes spicy, contemporary romance, and is a member of Romance Writer's of America (RWA).

She's a Clark Gable girl, addicted to reading, chocolate, shopping, Pinterest (her latest vice), and watching old movies from the 40s and 50s. She watched Gone With the Wind once when she was five, and has been hooked on romantic stories since.