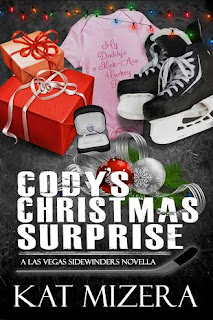 Hello Kat!  Thank you so much for visiting Written Butterfly with me today!  It’s such a pleasure to chat with you.  So tell me…

Q) How did you dream up the dynamics of your characters?
I used to be a sports journalist who covered the NHL, so I just got creative with players I met and talked to and, of course, because I’m a romantic at heart, made them all hotties with hearts of gold. What fun would it be otherwise? I took the teamwork that professional athletes always show on the ice (or the field, or whatever) and brought it into their personal lives as well. When one of them is in trouble, all of them are there for each other. Loyalty is very important to me, both in real life and my writing.

Q) Is this book part of a series?  If so, can you tell us about it?
This is the holiday novella for my Las Vegas Sidewinders series, which is my fictional NHL expansion team. Vegas is one of my favorite places in the world so all my books are at least loosely based there, although the characters travel and move around a bit. All the stories are stand-alone but the characters are recurring and there is a theme of friendship, loyalty and teamwork, both on and off the ice. The women aren’t all young and perfect either. One of my heroines is overweight, another was in an IED explosion in Afghanistan that left her with burns over 40% of her body and one of them is actually 40 and marries her 29-year-old boyfriend. I love having a diverse group of women as my heroines.

Q) Can you give a fun or interesting fact about your book?
I dreamed up the idea of a hockey team in Las Vegas several years ago even though I only published in April 2016. Ironically, just two months after I published, it was announced that a new hockey team would be moving to Las Vegas! I don’t know if that’s good or bad, though…

Q) What gave you the inspiration for your book?
We’re big hockey fans in our house and I firmly believe you should write about things you feel passionately about. Hockey, rock and roll and love and all things I feel passionate about, so that’s what most of my books will be about, although I may branch out a little.

Q) Do you have any habits that get you in the writing frame of mind?
Not really. I try to write every day but I take days off to just read and clear my head.

Q) Do you plan all your characters out before you start a story or do they develop as you write?
Both. I have an idea of who everyone is and what they’re going to do, but sometimes they develop personalities and start to tell me more about themselves as I write. The M/M I talk about later happened organically. Originally the story was supposed to be a menage but the two men had other ideas and they drove the direction they would go, not me.

Q) How much real life do you put into or influences your books?
Since I write about a hockey team, and I worked in the field, I try to keep the professional parts of the story realistic, even though their personal lives are completely made up. As writers, I think we subconsciously people watch no matter what we do, so I think I draw in a little bit of everything I see and do.

Q) What are your upcoming projects?
In 2017 I have all kinds of things planned. I have a short story in a March of Dimes charity anthology, I’m working on my own hockey-themed anthology, and a whole new series, the Inferno series. Inferno will be a spin-off from the Sidewinders, so you’ll see lots of familiar faces but it’s going to be a bit darker, kinkier and with some non-traditional relationships, although all with happy endings. I’ll be publishing my first M/M in that series, which I’m very excited about because I feel strongly in real life about letting go of hate and finding more love and acceptance in the world. It’s a book about true love and that hardships of being bisexual, as well as the inevitable hate. I hope people understand that it’s so much more than just a romance novel—it has a lot more depth. 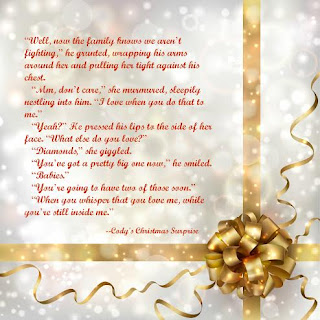 My first series is about a fictional NHL team, the Las Vegas Sidewinders. Each book focuses on one player… I try to create characters that are realistic, men that aren’t all cocky alphas, and women that aren’t 22 and perfect.

Book 2 in my series is Drake and Erin's story. She's a Marine who was badly scarred in an IED explosion in Afghanistan and he's a hunky hockey player looking for the right woman... her past is about to catch up to both of them and it’s up to Drake to figure out how to protect her.

Book 3 is about Karl and Kate. He’s a 6’4” goalie from Sweden who’s so hot women line up around the arena to get to him. Kate’s a PR whiz with a few extra pounds who can’t believe he’s in love with her. Karl likes it a little kinky in the bedroom, too, which ups the hot factor more than a little. Just when things are going well, his ex shows up and throws both of them into a tailspin—this is a story you cannot miss!

Toli’s book is Book 4, and after nearly 20 years with the same woman, he’s single again. Meeting Tessa is completely unplanned, but their week together burns hotter than either of them expected. The only problem is that she’s not officially divorced yet and her ex isn’t giving up that easily.

Book 5 is Zakk and Tiff's story. He’s never considered settling down until the widow of his late coach starts showing interest in him. As their friendship grows, so does something else, but someone else is determined to have her at all costs-even if it means making Zakk choose between the woman he loves and his freedom.

Buy links for the Novella: