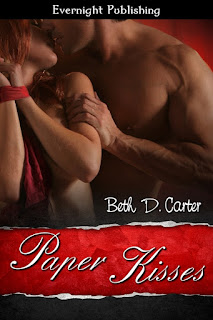 
This book was from a movie script I had written many years ago, when I lived in Los Angeles and wanted to break into the film industry. I wrote three scripts and realized I didn’t like writing them. They were too structured and formulaic. I have always wanted to be a writer, but I discovered this wasn’t the path I wanted to go.


Yes! This book is set in my own hometown Dexter, Missouri.


3.
3.Since the publication, what would you say has improved in your writing?


I think I’ve gotten better at writing actively instead of passively.


4.
4. Do you believe a book cover plays an important role in the selling process?


Definitely. This cover, for Paper Kisses, is absolutely beautiful. I love how it gives the hint of what type of kink Sky is into.


He laid a finger across her lips, shutting off any more questions.  He laid the black leather thing on the bed and picked up the blindfold, walking around her and fitting it over her eyes before tying it securely.  Her body practically hummed with anticipation.

Sky didn’t say a word as he began to undress her, helping her get her tank top off and then her pants.  This time he took her panties off as well and everything clenched even more.  Oh yes.

“Now, Alannah, I’m going to bind your arms,” he said.  “I’m going to use a monoglove.  It will enclose both of your arms from fingertips to above the elbow by holding them together behind the back.  It has a harness that will go around her upper torso to hold it in place.”

She gasped, suddenly unsure, and pulled back.  “That sounds painful.”

“I don’t plan on keeping you in it for long,” he assured her.  “Yes, it takes a long time for someone to become flexible enough to wear it long term, but I have a reason for securing you like this.  Trust me, Alannah.”

It took everything in her to agree.  When she nodded, he turned her around.  For several long seconds she was standing, not knowing what he was doing.  The blindfold did exactly what it was supposed to do, took her mind off everything but what he was going to do with her.

“Place your arms behind you, straight elbows, palms together,” he commanded.  Okay, this was the moment.  He asked her to trust him so she had to follow through.  She took a deep breath and obeyed the order.  Immediately, she felt the leather slide over her hands and up her arms.

Next he slid the harness over her head and adjusted the straps, which criss crossed over her torso above her breasts.  The pressure was not uncomfortable.  It wasn’t great either but she could tolerate it.  But then he began to ties up the laces on the glove and each time the leather cinched a little tighter, she couldn’t help but gasp.   He didn’t say anything and neither did she because even though this was weird beyond anything she could imagine, it was still thrilling.  When he was done, she tried moving her arms and couldn’t.  She was completely helpless.

“I want you to kneel,” he said.  He held her under her armpits and helped her to kneel.  “Spread your thighs a little wider.  Yes, good.  Now, stay right there.”

She couldn’t see, she couldn’t move even though her legs weren’t bound, so she couldn’t do anything except what he told her to do.  She heard the shower click on in the bathroom.  What?

He was taking a fucking shower?