Blast from the Past Spotlight - Laura M. Baird's "Capturing Clint" 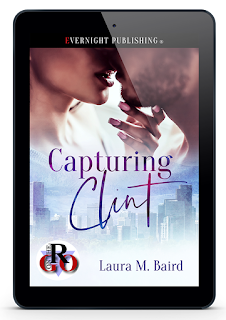 Clint let Chrissy, the adorable nerd, slip through his fingers while in college.

Ten years later, after a chance encounter, Chrissy will use her sexy confidence to ensure that doesn’t happen again.

Clint is more than interested but doesn’t feel worthy, and it’ll be up to Chrissy to show him how good they can be together.


I had a thin plot, as this story was based on a secondary character from another book. But as I began to develop the story and write the scenes, it took on a life of its own where the ideas just readily flowed.


The hidden secret is the affair my hero, Clint has, that devastated him, and nearly cost him his relationship with his brother, as well as his life. As I said, Capturing Clint was based on a secondary character from another story – a story I wrote many years ago and attempted a naïve self-pub route. I was proud of the story, but it didn’t do well at all. Mostly because I had no idea how to market it and get myself known. I hope to one day revise and republish; possibly offer as a free read. More about the affair, as well as Clint and his brother appear in that story.


Attention to detail and description, I think. I had a knack for shorter stories, getting right to the heart of my story, but I’ve been able to expand on writing, adding more without it droning on and on.  I still plan to write a variety of lengths – it just depends on where the ideas take me.

5.       Do you believe a book cover plays an important role in the selling process?


I do! I love the visual a cover can give you that gives you a glimpse of what to expect in the book. I want to see characters and/or settings that accurately represent what you’re about to read. I like clear and minimal text. I don’t like to see a cover crammed with too much, throwing the reader off because they can’t concentrate on the image.


Be more fearless! You have nothing to gain if you don’t take a risk.


They strolled through the courtyard content with the silence. When Chrissy tried to stifle a yawn,

Clint suggested he see her to her room.


“It has been quite the day,” she said as she leaned into him, hugging his arm.


“What floor are you on?” he asked as they made their way to the elevators.


They were the only ones in the car for the ride up, and as soon as the doors closed, Chrissy surprised Clint by latching onto his body and backing him against the wall.


He chuckled. “I thought you were tired?”


“I am. Tired of denying myself of you.” She fisted her hands in his shirt while she pressed her lips to his. She had never felt so bold, so daring. After all this time, she just hoped it proved to be the right move.


By the way Clint responded, she guessed she was on the right track. As his arms circled her she literally feasted on his mouth. Their tongues fought for control as they both alternately moaned and sighed. Chrissy had limited experience with men over the years, but that didn’t stop her from acting on lustful instinct when it came to this man.


With her conviction set, she would ensure they ended up together tonight.


Luckily the ride didn’t stop until it reached her floor. When the elevator doors opened Chrissy all but dragged Clint out of the car and down the hall to her door.


“Don’t say another word,” she said, panting. “Don’t be the gentleman right now.” She searched her clutch for her room card and finally got the door open. “You said you wanted me.”


Clint growled as Chrissy lured him. She walked backward into the room as he hurried after her, the door closing behind him. They were shut off from the world and the only thing that mattered was him and her. Together. Right now.


“Are you sure of what you’re doing?” he asked.


“Absolutely.” Her eyes never left his as she began to work on the delicate buttons along the side of her dress, releasing them one by one in a tantalizing fashion. As more of her skin was revealed, Chrissy’s gaze traveled Clint’s body, his lust evident by the strain of his growing erection against his pants.


“Looks like you might need some relief.” She peeled back the dress and let it drop to the floor, standing in a barely-there thong and bra which left nothing to the imagination. Watching his appreciative gaze upon her body delighted Chrissy. She noticed he lingered at her belly piercing, which was a simple diamond stud.


“The first time I saw your piercing, I was shocked.” Clint’s husky voice sent shivers across her skin.
“And highly aroused.”


“Were you now?” Her words were meant to tease as were her next actions. Chrissy gently cupped her breasts and slowly worked her hands down her torso, stopping at the elastic of her thong as her hips shimmied from side to side.


Clint was in front of her in two long strides, stopping her hands from any further movement. He then reached up to unfasten the pins holding her hair in place, releasing the silky tresses. Her body became electrified as he ran his fingers through the strands, murmuring, “I knew it would feel soft. So soft.”

He framed her face and rested his forehead against hers.


“Please tell me this is what you really want because I’m too close to losing it,” he gritted out.


“I want to take you slowly, savor you, but I don’t think I’m going to last.”


“Maybe I don’t want slow right now.” Chrissy lifted a hand to his face, running her thumb across his lower lip. “I don’t want to think too hard, I only want to feel.”


Her lips curved into a smile as Clint sucked her digit into his mouth causing wicked thoughts to invade her mind.


Clint walked Chrissy to the bed before taking one step back to rid himself of his clothes. There was no enticement, no show, only efficient movement as he quickly got naked while keeping his eyes on her. Just as she was about to undo her bra, Clint stopped her. “Let me.” He reached around to fumble with the hooks, and once undone, began to peel the bra away, slowly, as if unwrapping a delicate package. Tossing the garment aside, his warm hands covered her flesh, squeezing and molding. “So beautiful.” He tweaked her nipples until they pebbled beneath his fingers, causing a moan to escape her mouth as she pressed her body closer to his.


She felt perfectly cherished as he tenderly captured a peak. The repeated flicks of his tongue against the tightened bud sent a jolt each time down to her pussy. Chrissy speared her hands through his hair, holding him close as he lavished one breast then the other.


“Clint.” His name fell from her lips like a plea as her body rocked against his.


He knelt on one knee as his mouth worked its way down her torso, his tongue dancing over her piercing before lingering at a hip. His fingers hooked the thin strap of her thong and worked the tiny piece of material down her legs. As Chrissy stepped out of the garment, she kept her legs in a wide stance as his eyes zeroed in on her smooth pussy.


“Damn, you’re gorgeous,” Clint rasped. “I can smell your arousal and it's driving me crazy. I’m so close to coming already.” He didn’t give her time to respond as he used his fingers to part her lips and lash out with his tongue to taste her.


“Oh, fudge,” she moaned. Her fingers tightened against his scalp as she flexed her hips into his face. Chrissy sounded off with a moan, a gasp, as Clint sucked her clit, the sensitive tissue engorged and pulsing. Her legs shook as she drew closer and closer to her release. This only spurred him on as he tongued her harder, tightening his lips around her sex.


“Come for me, Chrissy, come on my tongue. I need to taste your cream.”


Returning his attention to his task, his fingers feathered her lips as his mouth worked ruthlessly against her flesh. Her orgasm triggered with one more pull and her scream echoed throughout the room. Her body danced wildly and her head fell back on her shoulders as Clint wrung as much pleasure from her as he could.


Suddenly, he was standing and capturing her mouth in a fierce kiss. She kissed just as fiercely as they couldn’t get enough of touching one another. The sting of his teeth against her lip felt glorious and she nipped in return.