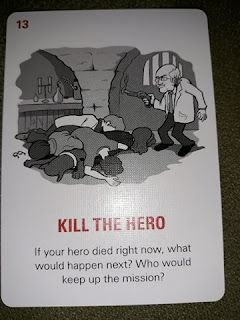 Years ago I wrote a six hundred page fantasy novel. I had three main characters: Aria, Quill and Sinjin. Half-way through the story I realized I had to push Aria's arc, and the only way to do that was to kill one of the men she had come to trust and rely on. So I had to kill Quill. It was an epic sword fight followed by Quill being killed with his own sword. I cried and cried, but it really made my heroine Aria grow.

If your goal is a HEA, then I don't recommend killing off your hero. But that doesn't mean you can't kill him off in your head just to see how your characters would act. Or how would you act? If you aren't sorry to see your hero killed off, then maybe there's something that needs changing.

If your hero died right now, what would happen next? Who would keep up the mission?

>Write a eulogy for your hero from another character's point of view. Could that character say any of those things while the hero is alive?

> Jot down your character's last will and testament. Who would get her stuff? Would she want to be buried, and where? What would her tombstone read?

It's almost newver a good idea to kill your hero in the middle of your story. But sometimes it's a great idea. Might this be one of those times?

If your hero died right now, who would take over her function? What would her opponent do next? What would her friends and family do? Imagining the hero dead is a great way to find out how indispensable she is.

Alternately, if everyone werongly believed your hero was dead, what would she suddenly be free to do? 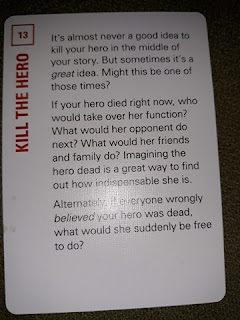