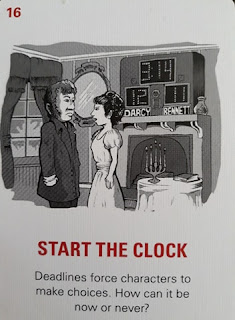 Movies give an excellent example of giving the audience time anxiety. Heroes in thrillers are always  behind schedule. Like Indiana Jones in almost every scene he's in. He's always running against a clock, bringing a lot of drama to the viewers. So how can you translate that into the narrative?

Perhaps it's not your characters running against a clock, but yourself. Some authors work better when there's a deadline. Like being back in high school or college, and a term paper due the next day even though you've had a month to prepare. I'm not much of procrastinator, but I do give myself mental deadlines. For example, I'm currently writing  in a collaboration with another author, and her book is done, waiting on mine. Even though she hasn't said anything, I know our books won't make us any money until mine is done. I have a mental deadline of the end of April, and I'm determined to make it.

If giving yourself that much of a deadline doesn't help, what about a smaller one? Is a chapter a week just right?

Deadlines force characters to make choices. How can it be now or never? 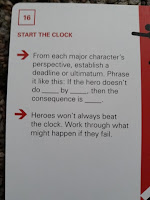 >From each major character's perspective, establish a deadline or ultimatum. Phrase it like this: if the hero doesn't do _____ by _____ then the consequescence is ______.

> Heroes won't always beat the clock. Work through what might happen if they fail.


Time is the essence of urgency. Consider basketball: Anyone can make ten free-throws in an hour. Ten baskets in a minute - that's difficult. And you can always want to make things difficult for your hero.

A ticking clock is rarely an actual clock. Instead, it's often phrased as "before" - before the bride says "I do" or before the Nazis cross the bridge.

Heroes usually know they're on the clock, but sometimes it's more suspenseful when they don't. If the ausdience knows there is a ticking bomb under the restaurant table, every moment waiting for the check is terrifying. 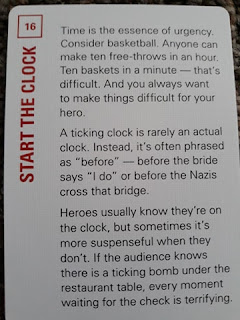