http://theafterdarkworld.blogspot.com
One thing about being a writer is that we constantly try to find a story in everything. My mind is always going on side trips to see if a piece of information I've assimilated could or would work somehow.  Sometimes it's just a picture, or a piece of music, or a even a word.

I am a lover of history.  My brain works well with linear timelines and facts I can memorize.  To paraphrase Dr. Who, history is a fixed time point in history.  It can't be changed, and now with the internet, even those who try to change it truth will always be around.

One period of history that always fascinated me was the California gold rush of 1849.  It was the aftermath that really captured my attention, how a city swelled from around 2000 to over 200,000 in a matter of years while dealing with all the infrastructure nightmares.  And to make matters even worse, a cholera epidemic swept through in 1855.  I was thinking Love in the Time of Cholera until I read about an interesting part of San Francisco's violent past...The Committee of Vigilance.  This was vigilante group that tried to end the violence and corruption running rampant through the city.  You had bankers and investors trying to gentrify this city suddenly thrust into fame, outlaws and criminals trying to run it, the Chinese immigrants who were rated lower than slaves, and disease.  What better time period to write a romance?

I guess the gold was a blessing and a curse.

It took only a moment for him to flip her skirts up and ease his calloused fingers up her inner thigh, sliding over her sensitive skin with feather light teasing. When he touched her curls surrounding the spot that pulsed for him the most, she was surprised that his hand didn’t get singed from the heat.
“And this,” he murmured against her ear, “is your pussy. Your delicious, wet pussy.” She meant to close her legs, but he shook his head. “No, let me. Please. Trust me, Avilon.”
Slowly, she relaxed. His finger dipped inside her curls, teasing before it found a rhythm that quickly escalated the fire in her blood.
“Feel this?” he asked as he flicked over the bud that throbbed with need. “This is your clit, and all I want to do is draw it into my mouth and suck on it until your cream flows into my mouth.”
The words enflamed her, the mental picture so stimulating that her body almost convulsed. Then he slipped another finger inside her as his palm applied just enough pressure to make her writhe. In and out he pumped with his hand, her hips mimicking as she gasped.
“Let go, love,” he whispered, and she felt his lips brushing over her cheek, her eyelids, her forehead. “You’re so much tighter than I imagined. I can just picture you clenching around my cock as you ride me.”
In and out his fingers pumped as he managed to rub her clit at the same time. Seconds later, her body tensed as waves of energy rolled over her, making her light headed. Stars exploded as every nerve ending blazed. Avilon was helpless to do anything but ride it out, humping his hand, which still tantalized  her pussy.
Every bone in her body liquefied. She would have melted onto the floor if Jason hadn’t been holding her up. Contentment filled her, and all she wanted to do was purr. When he finally withdrew his hand, she didn’t want him to leave, so she wrapped her arms around him. She felt his erection and gasped. She pulled back to stare at him with wide eyes.
“Jason? Does that…hurt?”
He gave a long-suffering little moan. “Yes, actually. All the blood seems to have drained from my brain because the only thought I have is that I want to lay you on that bed and fuck you until we pass out.”
+++++++++++++++++++++++++++++++++++++++++++++ 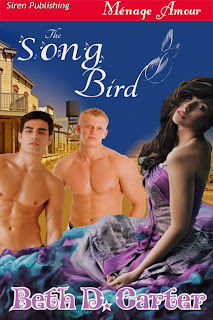 Avilon Chambert travels to the wild city of San Francisco to find her missing sister.  All she has is a letter explaining she’s in terrible trouble and that she’s been working as an upstairs girl in a club owned by two handsome men, Eli Masters and Jason Braddock.

When she arrives at the club, the only way she can get to talk to them is by auditioning for the singing position, and she captivates them by her beautiful operatic voice.  But the answers to her questions are vague and filled with holes, rousing her suspicions.

Her arrival at the club seems to set off a chain of events filled with danger.  As she searches further for her sister, she unleashes the wrath of a madman bent of revenge, threatening to destroy everything and every one she’s come to love.