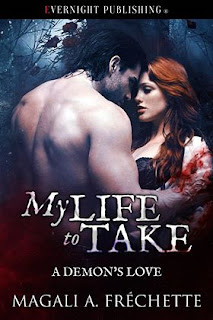 Hello Magali!  Thank you so much for visiting Written Butterfly with me today!  It’s such a pleasure to chat with you.  So tell me…


* This is the second and final book in a series called A Demon’s Love. It’s the first series within a universe of series, and so, readers will see these characters again in future books. This particular one follows Celina and Kai’s story: romance, betrayal, lies, and danger at every turn for both books. The newest release, MY LIFE TO TAKE, starts where we last left off in the first book, and so I definitely recommend reading the first one.


* Original, but I also don’t want to purposely write something I know writers would hate. But the story has been planned out in my mind for what seems to be forever, and so, while I’m open to change, some aspects are out of my hands.


* The main characters are always planned out first. It’s from them that I build their story with.


* Each as a connection to one another within the one universe called Monster’s Love. From there, many series with different books all interconnect to form one big story. I have written other stories that don’t connect at all though.


* I signed my third contract with Evernight Publishing for the first book in the next series called Storm Owl Legend. This will follow new characters, and follow the events of a Demon’s Love series two years later. I’m planning on at least five books for this series, and am currently editing the second one.
Blurb:


Everything Celina thought she knew was a lie.


Her husband’s murder, her family’s religion…nothing was what it seemed. The avenging blood on her hands is barely dry, but she’ll do whatever it takes to save this unshakable proof of their love. Even swallow her terror to fulfill the bargain that was sealed on a bed of lies.


But there’s little time for tender reconciliation. Demons are being murdered, their mutilated bodies marked with cryptic threats only Celina can decipher. When visions of the massacres plague her at every turn, Kai sends her back to the human world in the care of the demon she fears most.


Secured in Shiriki’s high rise, she must uncover her own shrouded history. The key to saving the dark realm lies in her past, but an angel with a diabolical mind may lead to their destruction. 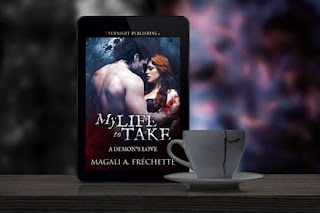 Excerpt:
She wrapped her arms around his neck and pulled him closer. “I’m fine.”
“And how are you feeling about us?” he asked quietly.
She took a deep breath. “We have a lot to work on for the next while, but we’ll do it together.”
“We will certainly do many things together,” he said with a lewd grin.
In less than a second, he stood naked, his muscles rippling in the low lighting of the room. She ran her hands against his hard chest, her pulse racing as she stared at his pale skin.
Mine.
The word resonated inside her mind as she felt him invade her thoughts. He growled as he pressed her body against his, kissing along her neck as she closed her eyes. He felt so good, and he was hers as much as she belonged to him.
“Your body, soul, and life are mine.” His tone darkened. “And although I never had a soul of my own, though my life is endless, you have all of me.”
Before she could respond, he took her mouth, thrusting his tongue inside. She moaned as he cupped her breasts, her nipples hardening under his touch. When he tugged at the hard peaks, their lips parted, and she let out a harsh breath.
“I want you.” The words left her in a whisper, a plea from the need pulsing through her.
He lifted her in his arms and carried her to their bed, sitting her on its edge. Despite his gentleness, an animalistic expression flashed across his face as he stared. He crouched in front of her and glided his hand along her thigh.
Heat filled her, burning so hot she was sure she’d combust. Licking her lips, she parted her legs. Her throbbing increased when his gaze traveled to her sex. He stared with such carnal desire, she was sure she’d orgasm.
“You are so beautiful … and no one else will ever touch you.” He kissed her inner thigh and trailed his tongue across her skin, nipping along the way as she gasped.
Letting herself fall onto the bed, her chest heaved as her stomach fluttered. He licked her swollen lips, and she trembled under the pleasure of his touch. He flicked her clit, and she whimpered. “Please.”
His muffled groans against her wetness had her trembling, and she writhed as he sucked hard on her pink flesh. She grabbed hold of his hands holding her hips, digging her fingernails into his flesh, crying out.
“Your screams are as delicious as you are, dove.”
Running her fingers through his hair, she tugged, so he’d look at her. He growled at being denied, his gaze darting to her sex as he licked his lips.
She panted. “I want you.”
He stood. Feathers flew around him, black as night. Within seconds, the feathers falling around him dissipated into smoke, leaving Kai in his true form. Her demon.

The horns on his head held the same red arcane symbols, glowing brightly. He folded his black wings as he took a step closer, the darkness behind his red irises sending a shiver down her spine. Her chest heaved as she crawled farther onto the bed and reached her hand out to him. She wished she had the words to tell him how much she loved him, but showing him would be better.
He chuckled as he got onto the bed, even kneeling he towered over her like a looming shadow waiting to pounce. “You do not need to use words. I can feel it radiating off you as easily as I smell your lust.”


Magali A. Fréchette writes the darker side of stories. Paranormal, dark fantasy, and mystery/thriller, but always with romance – she’s an extremist and loves both dark and cute things. All her stories are either set in Canada, or in alternate worlds (makes sense since she’s Canadian, right?).
Magali wrote her first story when she was 12 years old (and she’ll never speak of it again!), but started taking her writing seriously three years later. Since then, she always writes. It’s always been a dream to be a published author, and she can happily say she’s reached that first goal and plans on continuing writing and publishing for the rest of her days.
Posted by Beth D. Carter at 1:00 AM