Nix Whittaker Chats With Me Today! 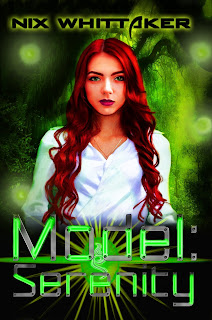 Hello Nix!  Thank you so much for visiting Written Butterfly with me today!  It’s such a pleasure to chat with you.  So tell me…


It is literally a dream. I have insomnia so one of the tactics to fall asleep is I create elaborate worlds and characters to fall asleep. It has been very helpful in real life as I can have arguments with my boss all in my head without getting into a real confrontation and probably fired.

I can’t help but do series. I like the characters too much and want to keep coming back to them or something else in the world that appeals to me. This series is set on another planet where humans have been adapted to better survive another planet. The different models of humans are divided into four castes. My main character is desperate for a family so she goes the route of artificial insemination but things get complicated when the father of the baby rocks up on her door. He is a Warrior and she is a Serenity so I get to explore how people from different backgrounds can find a middle ground. Of course there is also world domination and xenophobia as well but those get explored in the other books in the series.


I always think I’ve planned my characters out before I start writing but then when I do write they say and do things that always surprise me. In this case Kaidan turned out a much calmer guy than I expected. He is tough in a quiet way. The brother also was a surprise. I was going to make him very different. You get to see more of him in the next book.


I have a few upcoming projects. I’m organizing an Anthology called Well Said O Toothless One. It is something my dad always says and at the moment he is terminally ill and I wanted something to remember him by. So all the stories in there are stories that are amusing and show good guys winning instead of this toxic macho ideal that pervades literature. I’m also starting a new series in my Wyvern Chronicles world. This is more of a mystery and set a little later about 1853. Of course I still have the other books in this series that I’m only half way through writing.


K-I-S-S-I-N-G First comes baby ... wait that isn't right. But that is how Aaru has planned it, have a baby even if she can't find the right guy. On a planet where everyone is in a rigid caste system determined by their genetics, Aaru is part of an outcast model of human called Serenities. They had a tendency to go mad so Aaru wants children before that dreaded day appears. She never expected to meet the donor. Unfortunately, her plans change when the Scribe government comes for her and her baby. She would have been taken if the baby daddy hadn't arrived on her doorstep.

Kaidan is a Warrior and protecting people is part of his DNA. The stakes are just higher because Aaru is carrying his child. But to face the power of the Scribe government means he has to give up everything to follow his heart.


Excerpt...
“Whatever my brother is paying you I can pay you more.” She couldn’t but she wanted to gauge his depth of loyalty.


He frowned. “Your brother isn’t paying me anything. Is that who you’re hiding from?”


What game was he playing? “Who are you?”


“I’m Kaidan and I’m the father of your child.”


The father? The father was supposed to be sperm in a jar, not a human being standing in front of her. Certainly the father wasn’t supposed to be a man with muscles that bulged against his shirt. She could argue with a jar and fight against a man that didn’t exist to keep her baby. She couldn’t fight another human being let alone a Warrior. Her breath caught in her throat. She coughed but she was already light headed.


She could blame it on the pregnancy but so far she had been robust. She came to lying on the floor with Kaidan holding her in his lap. He rubbed her arm to help revive her. Propped up in his lap she could feel the muscles of his legs as he half crouched under her. His other arm around her kept her head off the floor. Aaru scrambled away from him when she finally came to and he let her. She didn’t fool herself. He was a Warrior. He had reflexes that would put a humming beetle to shame. Aaru watched him studying her.


It was a standoff.


There was no way she could run but she wasn’t about to go along with him either. Then she remembered the last thing he told her before she fainted and said, “That’s impossible. You can’t be the father. The father was some Rustic guy who went to a clinic in Jing. Reduced to a jar of sperm.” Her few years in medical school let her rattle off the word sperm without blushing but the raised eyebrow from the Warrior threatened to have a blush follow the words.


The Warrior tilted his head as he listened to her then carefully spread his arms to show he wasn’t going to hurt her. He slowly got to his feet and offered a hand up off the floor. Aaru wasn’t so pregnant that she couldn’t get up off the floor on her own. She didn’t take his hand but she did stand up. There was no way she would stay huddled on the floor while he stood intimidatingly above her.


She backed up so her back was to the wall as she didn’t like being so exposed. She had no idea if he was alone or not but she didn’t feel safe.


The Warrior didn’t crowd her, instead he stayed by the small table in the middle of the open plan studio. He said, “It wasn’t a Rustic man.” 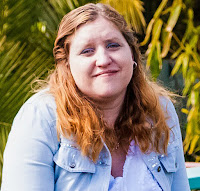 Nix Whittaker is a high school teacher in a small rural town tucked away in the middle of the North Island of New Zealand. She immigrated to New Zealand when she was a young girl from South Africa and had completely embraced the New Zealand life.


She has been writing from a young age when she read all the books available for people her age and was forced to write her own just to feed her voracious appetite for Literature.


She studied at Auckland University, but opted for a quiet life in the rolling countryside and views of Tongariro National Park. She lives with her dog and her three cats and writes between planning lessons and socialising with friends.
Posted by Beth D. Carter at 1:00 AM