Q & A with Petrina Binney! 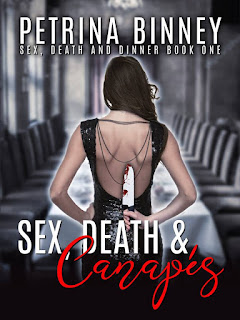 
My series, ‘Sex, Death and Dinner’, is a mixture of domestic suspense and murder mystery. So, I have a tight-knit group of people in a small village, who are all keeping secrets from each other.


At its heart, it’s a coming-out story, but the person who is in the process of accepting their sexuality has been married to a lecherous, manipulative bully for twenty years. Fiona has the least confidence of any of my characters, so her coming out feels very dangerous, as far as she’s concerned.


In the first book, ‘Sex, Death & Canapés’, there has been a murder in the area, and the people of Amberleigh decide to throw a series of dinner parties to prove that they’re not scared of this unknown killer in their midst. I won’t ruin it for you, but there’s more going on there than might be expected. However, during the dinner parties, Fiona, my protagonist, is obliged to be the consummate hostess even though she’s making dinner for neighbours who don’t really like each other, her disappointing husband of two decades, and the woman she’s been attracted to for some months.


I’ve been told the tension crackles from the page, which is good, because it should feel quite fraught. There are a lot of side characters but, it’s a murder-mystery – some of them will die.


The second novel in the series is ‘Sex, Death & Scallops’. It comes out on Friday, 7th September, on Amazon. In ‘Sex, Death & Scallops’, the characters are dealing with the aftermath of the most recent murder. So many of the other deaths have been planned with near-military precision, but the most recent has upset the applecart somewhat, because it came from nowhere.


Fiona is beginning to understand that her confidence has to come from within. She is not used to thinking of herself as much of anything really, however, in the course of the second book, a stranger appears. There’s some flirting. It’s a little awkward, but she realizes that she might be desirable. It’s a huge moment for her.


Of course, nothing is so simple. The stranger, Kitty, is quite creepy. She makes people nervous. She asks too many questions. Also, it becomes apparent that her flirting might just be a ruse to expose Fiona’s vulnerability.
Q) Is this book part of a series? If so, can you tell us about it?


Indeed. It is planned as a series of five books, the titles working through the courses of a meal. We start with canapés, then scallops, venison, a vegetarian alternative and finally, pudding. Over the course of the series, Fiona will learn to accept herself, and there will be a fairly impressive body count.
Q) Can you give a fun or interesting fact about your book?


It took me nine months to write the first book. The girlfriend of a buddy of mine read it in three days. I’m not sure if she went without sleep, but she certainly scolded herself for not getting back to work on time because she was reading on her lunchbreak.


I’m betting she’ll read the second book even faster.
Q) What do you think is your strongest asset as a writer? … what is your weakest factor as a writer?


My strongest asset is also my weakness: I can’t really focus on anything else until I’ve got this story out of my head. I’ve probably forgotten to pay a bill or buy a birthday card somewhere along the line, but this is what I have to do.
Q) Do you try more to be original or to deliver to readers what they want?


I have a very specific writing voice. I had thought that I was ruder in written form, but actually friends who have known me for years have said that, even if my name was nowhere near the books, they would know I’d written them. In sounding only like myself, I can’t really deliver what readers want, but I can hope that I’ve managed it by accident.
Q) Do you plan all your characters out before you start a story or do they develop as you write?


I like to think I’ve planned them, but I’m still things about them as I develop book three. I was surprised by an affair/death which was reflected on in ‘Sex, Death & Scallops’. I didn’t know it had happened until I saw what I was typing. Luckily, it works for the story in that it makes one character in particular seem quite terrifying. Given that she’s a little old lady, that’s no mean feat.
Q) Do you want each book to stand on its own, or are you trying to build a body of work with connections between each book?


Each book in this series is firmly rooted in the one that came before. I suppose a reader could find the characters in later books, and want to read the earlier ones, like a set of prequels, but I’d recommend starting at the beginning. Even though I have it planned out as five books, I really love Fiona Weaver-King, so I might have to bring her back in later novels.
Q) What are your upcoming projects?


I am working on book three, and doing a ton of research for book four. With my books ending on ‘Wha–?’ moments – not cliffhangers. I don’t want to leave people waiting for too long.

A corpse, a seduction, and a plate of scallops…

With Roland King missing, and Jennifer Nugent headed to Amalfi with her husband, Fiona Weaver-King works hard to keep herself above suspicion.

Pottery and sauvignon can only go so far, but with a dozen new portraits hanging in the studio, and her garden equipped with a brand new quail run, as far as the village of Amberleigh is concerned, Fiona is far too busy to dispose of a body.


Only with the appearance of the strange and voluptuous Kitty Fairoc does suspicion begin to grow. Who is this unusual woman, with her keen eye and ready smile? An undercover police officer? A roving reporter? Or is she simply, and alarmingly, a flirt? And what does she want with Fiona?

Excerpt
“He read it over three times and nodded, satisfied. His speech had a tendency to run towards the clunky, branching seamlessly into the depraved. There was little question he was better in written form. With pen and paper, he could take his time, edit himself copiously, and find the precise word, the exact turn of phrase, to have her rushing for the batteries and the drawer beside her bed.”


Buy Links for Book One: 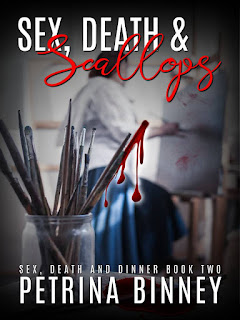 Petrina Binney is from 1980s south London. Daughter of a nurse and a carpenter, she spent much of her childhood writing stories to bring into school for whatever the eighties English equivalent of ‘Show and Tell’ was called.

She spent her teenage years avoiding all manner of naughtiness, instead writing copious amounts of self-indulgent poetry and reading multiple Brontes and Daphne Du Maurier.

In 2015, she hosted her first ever dinner party and, due to a heavy stomach and a slight bout of alcohol poisoning, dreamt up the character of Fiona Weaver-King.

Petrina spends the majority of her time in Devon, with her dogs, and drinking with older gentlemen.