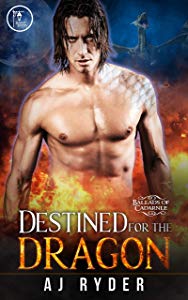 Hello AJ!  Thank you so much for visiting Written Butterfly with me today!  It’s such a pleasure to chat with you.  So tell me…


Q) How did you dream up the dynamics of your characters?
A)   I’ve always been a big fan of duality, and soulmates. As such, I always strive to make my characters two halves of the same whole...each other’s missing pieces, if you will. On their own, they’re alright, but they’re constantly aware that something is missing, and that they themselves feel incomplete, or like their souls are in a slumbering state. When they finally find each other, they feel alive and whole, and they thereby become stronger simply because they’re together.
Q) Is this book part of a series?  If so, can you tell us about it?
A)     Destined for the Dragon is part of my Ballads of Cadarnle series. This series sort of straddles the line between fantasy-romance and PNR, and Destined for the Dragon is the third, and newest, book in the series.
The series takes place in the fictional land of Cadarnle, and each book centers (and will center, in the case of the future books I have planned) around the different races dwelling within the land. Bonds Eternal is an MMF menage that centers around the two elven races, The Beast’s Beloved centers around the race of wolf shifters, and Destined for the Dragon centers around the race of dragon shifters. I have concrete plans for three more books in the series, including a book that centers on the merfolk, as well as plans for a book that focuses entirely on the mortal King of Cadarnle, who has only been referenced to up until this point. I might add more to the series once I finish the three books that I for sure have planned, but I’m taking it one step at a time.


While each book in the series does carry over small references from the book that immediately came before it, they can nevertheless be read as self-contained standalones, and have their own HEA. There are no cliffhangers, I promise!


Q) Can you give a fun or interesting fact about your book?
A)    I’m a fan of J.R.R. Tolkien, and I snuck in a subtle nod to him in Destined for the Dragon. So far, no one has noticed it, but I’m remaining hopeful that someone eventually will!
Q) What do you think is your strongest asset as a writer? …what is your weakest factor as a writer?
A)    I work very hard to make my readers feel the emotions of the scenes in my books. Basically, if a sad scene doesn’t make me cry while I write it, then I know I need to go back and rewrite it, because clearly I didn’t do it right the first time!
My weakness is without a doubt writing combat scenes. I wholly admit it, and with every book I write, I try to make my fight scenes better and more gripping.


Q) Do you try more to be original or to deliver to readers what they want?
A)    I try to do a bit of both. I try to incorporate familiar aspects into different settings and put my own original twist on them.
Q) Do you plan all your characters out before you start a story or do they develop as you write?
A)    It’s a bit of both, actually. I start off a book with a basic idea of who my characters are; but, it’s not until I’ve written a few chapters that I start learning the finer details of just what makes my characters tick.
Q) Do you want each book to stand on its own, or are you trying to build a body of work with connections between each book?
A)     I’m very much aware that certain themes in my books won’t be for everyone. For example, an MMF menage simply might not appeal to certain, and that’s totally fine. I’m also aware that people might buy the second or third book in a series by mistake without having read the first, or they happen to buy a book in the middle of a series because it happens to be free at the time. As a result, I make it a point to have all of my books able to be read as standalones.
While references are made to the books that immediately come before any given book in the series, they are small. If you were to start off my series by reading Destined for the Dragon instead of Bonds Eternal, you wouldn’t feel lost by any means.  Even so, if you were to read all of the books in the series (regardless of the order), you would without a doubt feel the connection between them, and that connection will only enrich and build upon the lore I’ve created.


Q) What are your upcoming projects?
A)    While I’m not yet finished with my Ballads of Cadarnle series, I’m actually hard at work on the first book of a new series I have planned. While I don’t yet have a name for the series, I can tell you that it’s going to be straight up PNR. Also, the first book will be featuring a secondary character from Destined for the Dragon.
How is this possible?

All will be explained in the free novella that will be released exclusively to subscribers of the Scarlet Lantern Newsletter. The novella will be released as the main book’s release date gets closer, so, be sure to sign up if you’re interested!

BLURB
Destined to save more than just his heart
The High Dragon
The moment Jaspyr, High Dragon of the y Draig clan, met Avyla he knew she was fated to be his mate. He sensed the magic within her and recognized that she was destined to be his salvation. She would be both his eternal love and guardian of his humanity.
A kind apothecary
But the meek yet strong-willed woman harbored doubt that a commoner such as she could be with, much less love, such a powerful man. Avyla did not know of the magic within her and had never experienced true love before. Though it may have been her destiny, Avyla’s heart was hesitant.
Danger from within
Not all dragons find their mates, which leaves Jaspyr and the others of his clan with the task of hunting them down once their humanity vanishes. When one of his clan falls to the insanity shortly after Avyla’s arrival, a battle wages that not only endangers the draconic shifters and their mates, but also produces a crucible where the bonds of love are tested and forged.
Buy Links...
https://www.amazon.com/gp/product/B07GFJ6JLF/ref=dbs_a_def_rwt_bibl_vppi_i0


One of the rare and elusive creatures known as a girl geek, AJ Ryder is an avid gamer, a voracious reader, and a lover of all things magical and fantastical. After years of thinking up sexy stories and hot, sensual characters of varying ilk in her head, she has decided to use her geeky, super powers for good and breathe life into them at last for the reading enjoyment of all.


You can stay up to date on AJ’s books and writing progress by following her on her blog, as well as on her Facebook Author Page. She can also be followed on Twitter, and Bookbub. If you want to be part of AJ’s ARC team, be sure to follow her on Booksprout, and opt in for ARC notifications.
Posted by Beth D. Carter at 1:00 AM