Yeah, it happens to the best of us.  Life gets in the way and your brain is taken in another direction and before you know it, it’s been days or weeks since you last looked at that book you’re trying to write.  You’ve forgotten little details.  What eye color did you give your hero?  What town was your heroine born in?  Perhaps you need to jumpstart your creative mojo, and that's what this series is designed for. Not to explain writer's block, but to help you move in a different direction. 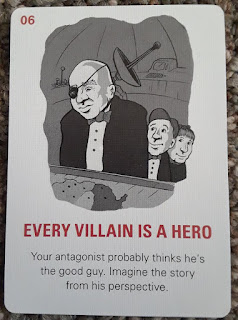 This is one of my favorite cards because I’ve always advocated that the bad guy should be complex and real. Why do readers love Snape (Harry Potter)? Or Loki (Thor)? Because they had emotions and real flaws. They weren’t perfect bad guys but believable ones. Their motivations drove them to commit bad things, but there was always a thread of goodness somewhere buried deep that made them redeemable.


Villains should never be bad just for the sake of taking over the world. They should never be omnipotent. A one dimensional bad guy doesn’t engage the reader and heighten the stakes for the hero. Make the reader love the bad guy, knowing he has to fall, and his eventually defeat will be bittersweet. This is draw the reader in and make them pick up your next book, because the characters will stay with them.

#6 Every Villain is a Heron


Your antagonist probably thinks he’s the good guy. Imagine the story from his perspective.

>Plot out what would happen if your hero never showed up. What would the villain/antagonist do? Would a different hero rise up?


> What is your villain’s greatest fear? Who does he love? Can either of these cause him to take action in your story?


> Brainstorm three moment in which your villain could be surprisingly heroic.

What is the villain trying to do? Beyond the hero, what other obstacles are in his way?


Don’t stop at the villain’s motivation(e.g., revenge, greed, survival). Rather, look for what the journey is. We might only see a small part of it from the hero’s perspective, but knowing the whole arc gives us more to push against.


Let your villain struggle and win a few times along the way. After all, he doesn’t know he’s the bad guy.