Got Writer’s Block?
Yeah, it happens to the best of us.  Life gets in the way and your brain is taken in another direction and before you know it, it’s been days or weeks since you last looked at that book you’re trying to write.  You’ve forgotten little details.  What eye color did you give your hero?  What town was your heroine born in?  Perhaps you need to jumpstart your creative mojo, and that's what this series is designed for. Not to explain writer's block, but to help you move in a different direction. 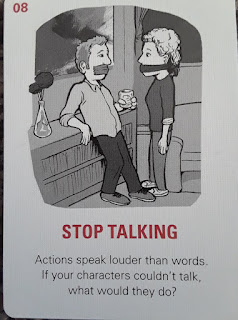 This one is a difficult exercise for me because I think of my strong points as a writer is dialogue. I take pride in my character’s interaction with each other and talking can give good insight into the thoughts and reasons behind actions. But I agree there is a time and place for action verses talking.


While talking can be a good way for two characters to convey feelings, remaining silent can also give subtle clues. Think of Heathcliff of Wuthering Heights (I, personally, don’t think he’s a romantic figure at all, but this isn’t about romance). Heathcliff is stoic, angry, basically a lumbering brute. His lack of communication is an excellent insight into who he is.


Actions speak louder than words. If your characters couldn’t talk, what would they do?

>Imagine this moment in a silent film. How would you know what’s going on?


> If your hero could only say five words, what would they be?


> Could the story beats happen in a montage rather than full scenes? What would those moments be?


Dialogue is great, but sometimes your characters need to shut up and do something. Look for ways to take away their ability to talk, and force them to find other ways to communicate.


There are countless ways to make normal speech impossible, from stealth to equipment failure to foreign languages.


Silence can also be a choice. Maybe your hero isn’t saying anything because he’s simply done talking.