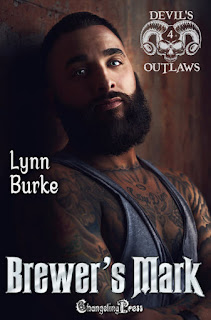 
She might be his mark, but one look into her eyes slays him.

Reagan “Brewer” de Jager might look soft as a teddy bear, but his stint as a sniper in the SEALs hardened him into a lethal killer. The fact his wife cheated on him while he’d been deployed makes him unable to trust. Cold hearted and empty, he sets his sights on his next mark—and one look into her eyes slays him.

Nova Smego wasn’t nicknamed Black Widow by her CIA superiors without reason. Underestimated for her petite form, she’s quick with her fists and lethal with a blade or a bullet. Tossed out of the CIA with a scarred reputation, she joins a hitmen-for-hire team in the hopes of exacting revenge on the one who ruined her career.

When the Outlaws eliminate her team in order to rescue one of their own, Nova is kept alive—tied to her captor. A winter storm kills the electricity, but not the heat building between her and Brewer. There was a reason he couldn't end her, and while she plans her escape, she fears losing her heart to the chemistry sizzling between them.

But when Nova's desire for vengeance shakes the tentative bond between them, the Outlaws issue Brewer an ultimatum. Pull the trigger, or find common ground to trust one another and avoid the Outlaws’ demand for her life.

Brewer stood in the doorway, his gaze flitting over my face as he stepped inside my prison.

My heart spasmed -- and that damn tingle between my thighs roared to life. I scowled.


Chin tilted up, I held his blue eyed stare, trying to focus on what he’d done, the family he’d taken from me, rather than the arousal he’d woken inside my core.


A twinkle lit his eye and twitched his lips peeking from his full beard -- a beard that appeared silky, bringing to mind an image of his dark head between my thighs. Would his facial hair tickle? Scrape and mark my skin?


I swallowed and jerked my focus back up to his eyes, determined to keep silent no matter what he said -- or did.


He caved from the silence between us first, expelling a heavy exhale, his shoulders relaxing the slightest bit. “What’s your name?”


His lips quirked as though to smirk, but flat lined. “Bet you got your ass bullied for that name while growing up.”


My breath caught -- and Brewer blinked as though his words had escaped unintended. He stood a few feet in front of me, doing nothing to hide the cock swelling inside his leathers. Long and hard…


The tingle of arousal morphed into pure wetness, dampening my panties in the span of a single breath as we stared at one another, our fogging breaths loud in the stillness.


“Goddamnit.” Brewer scrubbed a hand down over his face and beard while I attempted to swallow the dryness from my throat. He spun and left without another word, leaving my upper body unwrapped.


My arousal kept me warm for all of two minutes before my teeth began to chatter.


Fucking asshole couldn’t handle the sexual tension, the complication of what that brought to our situation. He fled like a pansy-ass.


Better that than rape me…


“Fuck,” I muttered, eyes clenching shut against the thought of him thrusting into my body. My pussy spasmed, deepening my frown. I hadn’t let a man’s dick near me in over three years -- and I wasn’t about to let some Stockholm syndrome make me lenient. No matter how fucking hot said man might be.


He’d killed my team, so given the chance, I would kill him.


OTHER BOOKS IN THE DEVIL’S OUTLAWS SERIES:


Lynn Burke is a full time mother, voracious gardener, and scribbler of spicy romance stories. A country bumpkin turned Bay Stater, she enjoys her chowdah and Dunkin Donuts when not trying to escape the reality of city life.