Blast from the Past Spotlighting DC Renee's..."The Beauty Beneath" 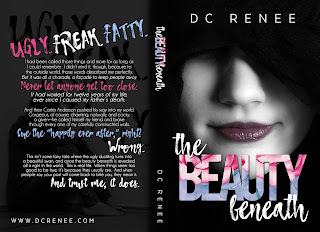 Ugly. Freak. Fatty. I had been called those things and more for as long as I could remember. I didn’t mind it, though, because to the outside world, those words described me perfectly. But it was all a charade, a façade to keep people away. Never let anyone get too close. It had worked for twelve years of my life, ever since I caused my father’s death.


And then Carter Anderson pushed his way into my world. Gorgeous, of course, charming, naturally, and cocky, a given—he called himself my friend and broke through every one of my carefully constructed walls.

Cue the “happily ever after,” right? Wrong.

This isn’t some fairy tale where the ugly duckling turns into a beautiful swan, and once the beauty beneath is revealed, all is right in the world. This is real life. When things seem too good to be true, it’s because they usually are. And when people say your past will come back to bite you, they mean it. And trust me, it does. 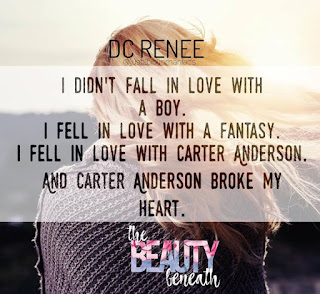 I use the same method with all my books. I figure out the major plot points and then start writing. At that point, the blanks get filled in as I go. Sometimes, a chapter doesn’t even go the way I thought it would when I set out to write it.

2.    What was your hardest scene to write in this book?

There’s a scene when Carter realizes the truth “beneath” Em – I don’t want to give away too much. I had to re-write it a few times before my sister (who reads and approves each chapter) said it was good to go.

4.     Did you hide any secrets or Easter Eggs?
I always try to have one of the main characters see things that don’t add up in anticipation of my twist. (Yep, I always have a twist!) Of course, The Beauty Beneath has some as well, but I’m not telling you what they are.

5,      Since the publication, what would you say has improved in your writing?

I think every writer naturally gets better with each story.  I think, overall, my writing has improved, my word-choices, my narrative, etc.

6.      Did you leave out anything in this book that you wished you hadn’t?

I actually didn’t. I always try to have a happily ever after along with an epilogue that is set far into the future so the readers can know what happened to the characters. I did that with The Beauty Beneath, so I think I’m good. 😊


7.      Do you believe a book cover plays an important role in the selling process?

Yes, 100%.  I, personally, don’t even look at covers when I pick up a book, but I know I’m one of very few people that is like that.  I see/read/hear so many people saying they grabbed a book simply because of the cover.  That’s why you’ll never see a full face on any of my covers. My theory is that we all have different tastes in people, and I don’t want a reader to think the person on my cover isn’t to their liking and therefore not buy my book.

It’s sort of sad that this is my advice, but it’s to make sure I have a lot of ready-to-publish books in my queue because time slips away from you.  And, as an unknown indie author, if you don’t have releases every few months, people forget about you.  Before I had kids, I had more time to write. Now, I have much less time, so I only have about a book or two a year.  I wish I had more time or more books.


That kiss.  That kiss.  Wow.  I mean … wow.  No, make that a capital WOW. W-O-W.  I was alone, but I wasn’t sheltered.  I’d often wondered what it would be like to kiss someone. I’d imagined my first kiss, imagined a heck of a lot more actually, but I never thought any of my wildest fantasies would come to fruition.  But then again, I never thought a whole slew of things would happen in my life. And then I met Carter, and suddenly, I was doing and saying things I wouldn’t have done before.

I was so mortified when I had to admit I was a virgin.  So absolutely humiliated.  I’ve never shared intimate stuff about myself with anyone. I didn’t have girlfriends who sat around and compared penis sizes.  Carter was the closest thing to a girlfriend that I had, but even then, who the hell wanted to admit to a guy, especially a guy like Carter, that they were a virgin?  Certainly not me, but I blurted it out.  And then my mouth wouldn’t shut up because it went on and told him I’d also never been kissed.

And then wham.  His lips were crushing mine, bruising them really, while his hands held my face so gently.  The contrast in pressure alone would have shocked me, but that was taking a backseat to the fact that a guy was kissing me.  And not just any guy.  Carter fucking Anderson was kissing me, and yes, that totally called for the f-word.  And he didn’t peck my lips like a pity kiss.  No, he had his eyes closed, his eyelashes fluttering ever so slightly, his lips moving against mine even when I was rooted in place, my hands at my sides, my eyes wide open.  He didn’t back away.  He pressed on, and I gasped, which I should have known from all those damn books I read was a universal sign for “Pass Go, Collect Two Hundred Dollars.” And “Go” in this particular scene was tongue in mouth, and by that, I mean his tongue in my mouth.  And the “Collect Two Hundred Dollars” part?  That apparently meant it was time for tonsil hockey.

Lucky for Carter, I liked hockey.  I had never played before, just watched from the sidelines, but heck, if the coach wanted to put me in the starting position, then who the hell was I to argue, right?  So I played my damn best.  And by that, I, of course, meant I let my tongue tangle with his.  I wasn’t sure what the hell I was doing, but I followed his lead.  And boy what a fantastic lead it was.

I must have done something right because Carter held my face tighter, his grip not allowing me to pull back. Not that I wanted to.  I had been completely shocked when it started, but the warm wetness of his tongue, the softness of his lips, drew me in, mesmerized me, made me feel something I’d never felt before.  I wasn’t willing to give that up—not even knowing this might change things for me.  I needed this.  I needed it so badly, and I didn’t even know it.  But now that I’d had it, I wasn’t giving it up that easily.  And then he moaned, and if I didn’t have confidence before, I sure as hell had confidence now.

Somehow, my hands had traveled up to his hair and buried in its silkiness.  All the different sensations, the emotions bubbling up inside me … they were too much.  When people said that reality was better than fantasy, they were on to something because never, in all my imaginations, had a kiss come close to this.  It was something else really.  From his lips, to his hands, to the way the strands of his hair felt under my touch.  And the way he held me so reverently.  I felt like this wasn’t just a random kiss to him.  And the way his tongue worked mine.  Whoa.  Give me a second to fan myself.

I couldn’t handle it, though, so I pulled away.  He opened his eyes slowly, but when he looked at me, his eyes were glazed over, his lips were parted, swollen, and his breath was shallow and ragged as if he’d been running for miles.

I knew I looked the exact same way, but all I saw was that I hadn’t been the only one affected, which completely thrilled the hell out of me.

But then I remembered Carter had kissed me.  Carter fucking Anderson had kissed me.  I mean I knew he’d been kissing me, but knowing it and actually realizing it were two different things.  I could have been mad; I should have been mad.  I never asked him to kiss me, I never asked him to take pity on me and give me my first kiss, and I sure as hell never asked him to get me to enjoy it.  And if you haven’t figured it out yet, enjoy it I did.  He stepped over a line.  He stepped over a big line.  He took something away from me – my choice.  If I hadn’t kissed anyone in all my years, what made him think I wanted to kiss someone now?  What right did he have to presume I wanted his lips on mine?  And more importantly, I felt an overwhelming wave of embarrassment.  I had admitted I was a twenty-four-year-old woman who had never been kissed, and my friend, practically my only friend, took it upon himself to rectify that.


And to top all that off, he said, “Now you have,” like he was doing me a favor.  See?  Totally should have been mad, but as I studied his face, watched the rise and fall of his chest, and saw the way his heart beat in his throat, I knew he hadn’t done it out of spite. He hadn’t even done it out of pity.  Something else was there, and that made me even more scared than if it had been a sympathy kiss.  Because with just one kiss, just one taste of him, I was royally screwed.  All the feelings I had been battling, all the emotions I had refused to acknowledge, and all those nagging voices I shoved deep down were suddenly all out at once.  I liked Carter.  And not in the friendly type of way.  I liked Carter.  I really liked Carter.  And I couldn’t have that.  Not only because I was sure that, even with this phenomenal kiss, he’d never like me, but also because I had let him in far enough.  I couldn’t afford to let him see every inch of me, every part of me I was still hiding.


So I did what I’d been good at doing for all my life.  I pretended it didn’t matter.  I told myself to go on despite what my heart was telling me.  I hid.  I hid behind my comments, behind my sarcasm, and behind my humor.  I hid.  Plain and simple.  And it worked.  Because any potential awkwardness that could have occurred at that moment didn’t.  We went back to our normal selves, and the rest of the night was just a regular day for us.  But I’d be lying if I didn’t say I almost wished I didn’t hide that.  Almost. 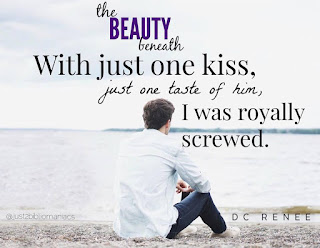 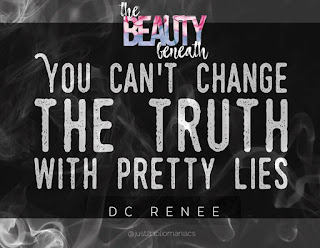