Gorgeous, businessman, Saxon Dearing buys a pied de terre in the city where he works. Only using the place on three nights, he goes home to his beachside house for the rest of the week. At thirty-two, immersed in his work, he doesn’t know he’s lonely until delicious, twenty-five year old Jon Palmer literally drops into his life during a thunderstorm.

Artist Jon struggles to sell his paintings from a tiny studio, and works in a city gallery to pay his rent. As the two men fall in love, Jon can’t overcome the idea his lack of success is a barrier to telling handsome, wealthy Saxon how he feels.

When his boss offers him a dangerous way of making money, Jon must make a choice.
Will he risk telling Saxon he loves him or let his lack of confidence lead him astray and away from the man who loves him, too?

Today we welcome, Saxon Dearing one of the heroes

Saxon, If you were a dessert, what would you be?

What do you do when you need to blow off steam?

If I’m in the city I go to the gym and beat the crap out of a punch bag. If I’m at the beach house, I run on the beach, although I do keep to the wet sand and I like to wear my iPod

What do you look for in a man?

Nothing now I’ve met Jon. He’s perfect for me. I love him. He’s intelligent, creative, good-looking, sexy, sweet … I could go on all day about him.

What is in your refrigerator right now?

In the city, steak, lettuce, cherry tomatoes … a half pack of beer, what else … a red pepper. There’s not that much because Jon and I are going up to the beach house tonight.

What’s on your bedroom floor?

In the city, my old baseball bat, that’s under the bed.

What do you wear in bed?

Light on or off?

Is that for licking off Jon’s abs? Has to be chocolate.

Oh, well, I have to think about that for a second. I could say spiders or losing on the stock market but truth is it’s losing Jon’s love. It would break my heart.

What is your most treasured possession?

After the last question … Jon’s not my possession but I treasure him. If it has to be a possession, then it’s a drawing Jon gave me … he’s an artist.

I have some old faded levis and beaten up leather boots that I rely on when I’m not in suits. I usually throw on a t-shirt and my battered leather jacket over the top. I have to wear suits for work. I like my black one best.

What do you like to see Jon dressed in?

Anything he likes, (his eyes mist a little) although I do like him in the tux he wore for our wedding, and in his ripped jeans, because there’s a frayed bit high on his thigh…

Do you have a favorite music track?

My taste and surprisingly Jon’s too, is eclectic. We’re listening to old Coldplay stuff right now … love them.

Tell the readers something you’ve never told anyone before.

(Grins) What? You mean spill a secret? You do. (Takes a deep breath) I have nothing for you, nope not a thing…

We’ll make that the last question. Thanks for visiting. Where are you off to next? 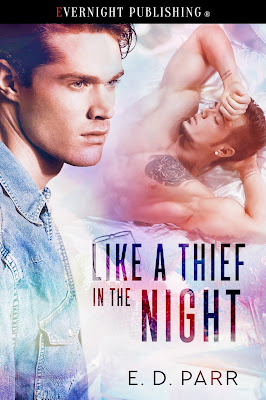 We have a story teaser for you from, Like a Thief in the Night
Jon struggled into a sitting position. “What time is it?”

Saxon shook his head. “I don’t know, but maybe nine or ten.” Saxon sat up.

“Hell, not ten please.” Jon leaped from the bed and dashed to his backpack where he snatched a smartphone from the front zipper pocket. He ran his hand through his sleep-ruffled hair. It stood on end at the front. He cast a glance at Saxon. “It’s nine. I start at nine-thirty. I’m sorry, I have to dash.”

“It’s okay. Will I make you a coffee while you dress?”

“Thanks for thinking of me, but I’ll make a cup at the gallery.” He ran into the bathroom and came out moments later in the jeans and sweater Saxon had seen him wearing the night before. He dropped a pair of boots to the floor and zipped up his fly as he pushed bare feet into them.

Saxon gazed at the spectacle. He got out of bed and walked rapidly to the kitchen remembering Jon’s jacket was draped over the back of a chair. He brought it to Jon.
Jon rewarded him with a smile. “Thank you. Is it okay to leave my pajamas in the bathroom?” He slipped his jacket on and grabbed up his backpack.

To Saxon’s surprise and delight, Jon kissed him by the side of his mouth.

“See you tonight. Thank you so much.” He strode to the door, opened it, and left.
Saxon went to the bathroom and picked up Jon’s pajamas. He hung them from a hook on the door and dragged on his robe from the other hook. Jon’s socks lay in a damp bunch on the floor next to the shelf housing towels. His boots must leak. Concern furrowed his brow.
He put the socks in the laundry hamper. They can go in the wash. I’ll get coffee first. I’ve missed early trading. Perhaps it doesn’t matter this once. Saxon hummed as he heaped coffee grains into the filter. An unfamiliar deep happiness bubbled in him. 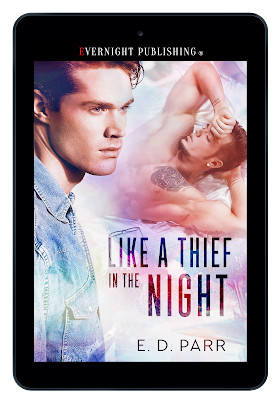