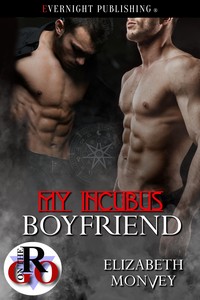 Hello Elizabeth! Happy birthday! Thank you for stopping by so we can chat about your new release! So tell me...

Yes! It’s book 6 in my “My Boyfriend Is…” series, a series of short paranormal romances where each book features a different supernatural creature. I’ve written werewolves, vampires, aliens, ghosts, shifters, and in this one, an Incubus demon.

This book features Wiccan practices so I wanted to stay true to that. I also read a lot about Incubus demons and the mythology around them to create a realistic story.

There have been a few. I really liked the ghost story in My Ghostly Boyfriend because I felt it was pure love between the characters. I also liked the story of Carried Away because I tried hard to stay true to the Korean culture.

Most of my books are stand-alones, although I have written two series. One was the Divergent Species and the other is an ongoing project with Jacey Holbrand titles Project Mars. I prefer to write stand-alones, however. I like the completion of each book.

My plans for 2020 include two more Project Mars books with Jacey and two more books in the My Boyfriend Is…series.

Emmett owns an occult store. He firmly believes in magic. His boyfriend, Jackson, does not.

Yet none of that matters because they are devoted to each other. Until one night, when Emmett becomes the unexpected target of a sexual demon…an Incubus. Suddenly Emmett can’t remember their passionate nights. He’s slowly being taken over. And Jackson struggles with the realization that magic might just be real after all.

Now Jackson has to step in to fight for his love before the demon completely consumes Emmett.


He touched the cast iron rim and a bolt of electricity seized through his body. Shocked, he yanked away and cradled his hand. Surprised, he backed away. The thing had never conducted such a static charge before, and he’d bought the things years ago at an estate sale from a known practitioner of Wiccan magic. Suddenly, everything about it now creeped him out, so Emmett decided to leave it be and head home. Gathering his stuff, he headed toward the door when suddenly a fierce wind whipped out of nowhere to encircle him.

Frightened, Emmett stumbled back and tried to bat at the air that sucked the oxygen from his lungs. He couldn’t breathe. The swirling winds tore through him, bringing him to his knees. And as quickly as it had started, it abruptly ended, leaving him gasping.

“You are a good vessel.”

The whispered words echoed all around and Emmett looked up to see a shadow approaching. Slowly, it took shape, coalescing into a tall, thin creature with horns protruding from the sides of its head. Fear sliced through him and Emmett tried crab-walking away from it.

“I will keep you,” the thing seemed to hiss. It’s bright yellow eyes blazed with the heat of the sun. The thing solidified even more, turning into a man. With chiseled abs, a beautifully sculptured body with a large cock and balls.

“W-what are you?” Emmett cried out.

“You will feed me,” it taunted, not answering his question. In fact, Emmett couldn’t see its mouth moving. “I will be you and you will be me.”

It stopped at Emmett’s feet and the thin lips twisted into some semblance of a smile. In a flash, Emmett remembered all he’d forgotten in the night before, and he remembered seeing this…creature?...before. It had rushed at him, making him collapse and pass out. And through the night, all the sex with Jackson had been because of this demon.

“Tell me what you are,” he whispered, horrified.

“I am a nightmare, induced to lie upon the unknowing. I have existed as far back as Mesopotamia and Samaria, to beget with women a demon hybrid. I thrive upon the sex of humans, no matter if be male or female.”

Emmett wracked his brain for such a creature, finally coming to one horrifying  conclusion. “You’re in Incubus?”