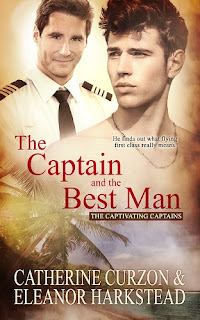 Hello Catherine & Eleanor!  Welcome back to Written Butterfly!  It’s always a pleasure to chat with you.  So tell me…
Q) Is your book part of a series?  If so, can you tell us about it?

It’s part of the Captivating Captains series. Each book is a stand-alone novel with a brand new set of characters, but they’re all linked by the theme of captivating captains! We’ll let the blurb do the talking.

“Throughout the ages, the image of the stern, unyielding captain, resplendent in his immaculate uniform, has been a staple of fiction. He instills loyalty, devotion and sometimes fear in the hearts of his men, and they’ll follow him anywhere.

It’s time to meet a new generation of captains, who still make their men tremble, but for very different reasons. From the oh-so-proper ballrooms of the Regency to the hellish trenches of World War One, the flashing cutlasses of the Golden Age of pirates to the chilly bunkers of the Cold War, these captains will have you hungry to join their ranks.”

CC - I didn’t really find any of the scenes in The Captain and the Best Man tough to write. Though I suppose the moment when a bride nearly got swept out to sea by a combination of her veil and a tropical storm wasn’t too nice for the fictional bride! The easiest scene to write were probably Captain Guy Collingwood’s in-flight announcements. It was a chance to have some fun.
EH - This is one of those novels that wrote itself, really. Once we had our ideas mapped out for it, we dived in and the story told itself. I hope it works for readers — you can lay back and let the story take you away.

CC - My strongest asset is probably discipline. I write full time and I’m often juggling a combination of projects at once, so I’ve learned to be very disciplined with my time and energy. My weakest factor stems from the same place and I’ve had to make a conscious decision to get my work/life balance - otherwise I’d happily still be writing at dawn!

EH - I’m a bit of a worrier and in the olden days when I wrote everything longhand first before typing it up, I would go over, and over, and over things. And that’s a very good way to get stuck and lose a story’s momentum. Writing straight into a computer (or phone if I’m on the move) has stopped me fussing about, but I think in some ways that attention to detail (I’m a librarian by day!) comes in handy for writing — as long as it doesn’t become an obsession with detail instead.

CC - Very occasionally we might jump ahead to test out particular elements of a project, but on the whole it’s linear.

EH - I do know of authors who write the scenes they’re looking forward to first, so that while they’re writing the scenes leading up to it, they’re able to focus on them without being distracted by thinking “In four scenes’ time, I’m going to be writing that really good bit! Yay!” But most of the time we write in linear fashion, partly because it makes life easier if you’re co-writing, and I think that’s how we’d write individually as well. It works for us because we know what’s happening pace-wise and can make sure the story arc works.

We’ve got two more Captivating Captains novels out next year, as well as a Valentine’s short story. Then we have two romantic suspenses on the way as well. We’ve got lots of stories in our bottom drawer that we hope will see the light of day eventually, and at the moment we’re having fun in a sandbox in a setting we’ve never tried before. Other than that, there’s more episodes of our Gin & Gentlemen podcast on the way! 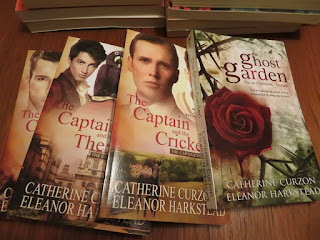 Sign up to our newsletter for our exclusive free short story, “The Brighton Beaux”: https://curzonharkstead.co.uk/newsletter

The Captain and the Best Man (Captivating Captains #4)

When Josh leaves the rainy shores of England for the sun-drenched tropical island of St Sebastian, his biggest worry is remembering his best man’s speech. But a chance meeting with dashing airline pilot Captain Guy Collingwood leads to a hot and raunchy holiday romance.

Guy’s everything Josh is looking for in his ideal man. Mature, dashing and confident, he’s also single and more than happy to show Josh the pleasure of St Sebastian. Yet Guy’s unruffled demeanor hides a past regret. Is the wedding of Josh’s best friend about to reopen a painful chapter that has never fully closed?

As a fearsome tropical storm threatens the island paradise and a broken family threatens Josh and Guy’s happiness, the stakes have never been higher. Can St Sebastian work its magic to heal past wounds and will Josh and Guy’s holiday fling take flight? 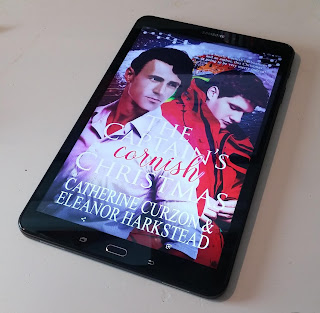 Catherine Curzon and Eleanor Harkstead began writing together in the spring of 2017 and swiftly discovered a shared love of sauce, well-dressed gents and a uniquely British sort of romance. They drink gallons of tea, spend hours discussing the importance of good tailoring and are never at a loss for a double entendre.

They are the authors of numerous  short stories and two novel series, the de Chastelaine Chronicles, and the Captivating Captains, published by Totally Bound and Pride.