COVER REVEAL!.....Come With Me (Those Who Survived) 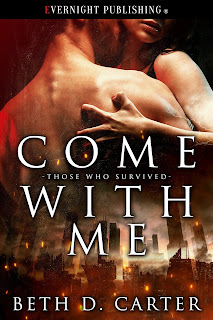 Those Who Survived Part One

Lainey is one of the few that survived the virus that ravaged the human population. In order to remain safe, she stays away from people, preferring to live on her own. Not trusting anyone. Until one night she’s attacked and rescued by a stranger who insists that there’s still good in the world.

Nolan has a fantastical story of a new civilization in Canada, and urges her to go with him. Lainey doesn’t know if she believes him or not, but the unknown is enough to scare her away. Yet day after day he slowly breaks down her walls, opening her up to the possibility that she might be strong enough to take a chance not only on him, but herself as well.