Q & A with Katherine McIntyre!


Hello Katherine!  Thank you so much for visiting Written Butterfly with me today!  It’s such a pleasure to chat with you.  So tell me… 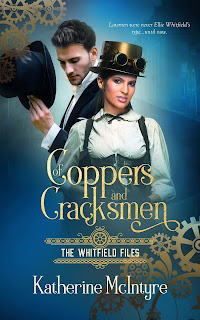 Yes! Of Coppers and Cracksmen is the second in the Whitfield Files series. The series is about the Victorian streets of Islington, featuring an array of steampunk characters from technomancers to alchemists. Book two in the series is a forbidden love romance featuring a detective and a thief who’s currently being framed for murder. When she becomes the next target for the serial killer, Ellie and Bernard work together against the clock to try and stop the murderer before she ends up dead.

The hardest scene to write was probably the fight scene at the end, which is a knife fight that I’m unfamiliar with. As for easiest, any of the banter between the two just flowed out on the page.

I did a lot of the landscape and area research for book one in the series, so a lot of the continued research in this one was Victorian slang to get the dialogue right. I also dove into researching individual aspects of the book as I went through it, such as aspects about the cops and detectives of the time, how thieves operated back then, etc.

I tend to have a favorite book in each series. Out of the Tribal Spirits series, Forged Futures ended up being my favorite, a combination of grief and cinnamon roll leads. In my Philadelphia Coven Chronicles series, my favorite was always Rising Autumn, featuring necromancers, cemeteries, and a whole lot of intense romance.

While each Whitfield Files book can work as a standalone, but each of the books features a different member of the Whitfield family, and so their stories intertwine, especially between the first and the third book.


When Ellie Whitfield’s accused of a crime she didn’t commit—though she’s committed many—only one man believes her. And he’s the unlikeliest man as well—Detective Bernard Taylor. He’s a handsome chap, but lawmen were never her type. At least, until now…

Bernard Taylor’s hunting down the Butcher of Broad Street, and though Ellie Whitfield’s led the coppers on a merry chase through Islington too many times, the woman’s no cold-blooded murderer. As they work together, he can’t help but be charmed by the vivacious Ellie, and before long, heated glances turn into something more explosive.

However, the closer they get to solving the murder, the deeper the serial killer draws them in—one misstep and they might be his next victims.

The blood staining Ellie Whitfield’s hands was as good a reason as any to run from the mutton shunters. Not like she needed one—in her line of work, coppers meant bad news and missed coin. Still, the crimson painting her fingertips didn’t sketch her in the best light—not while crouching beside a corpse.

The shouts rang from the opposite end of the alley, which left no time for rotting about.

Ellie vaulted down the other side—toward the consuming shadows. The coins she’d nicked jangled in her trouser pockets, enough coin to pay their rent for the next month. Nothing someone as poor as a matchstick maker could pass up. The air on this side of town grew thick, coating her skin like oil, but she gulped mouthfuls. She reached the end of the alley, which bisected another one, tall buildings looming on either side.

The clang of police bells echoed through the quiet night in Camden Town.

At least, quiet until she’d mucked around the streets to watch the gents and ladies sashay by—their steps a little lighter after she’d absconded with their niceties. She wouldn’t have gotten caught if it wasn’t for the dead woman she’d stumbled into at the end.

Her ponytail streamed behind her, a few strands sticking to her sweaty forehead. The coppers loved to parade around like they owned this city, but she bolted in the direction of her home, Islington, one of the areas they’d all but given up on. The police only served those with enough coin to flash, and she’d been scraping from the moment she sprang from her mother’s womb.

Ellie’s shoes slapped against the cobbled streets louder than she liked, but right now she needed speed more than silence. The canal burbled in the distance, and the thump-thump-thump of the cops behind her whispered that moving quick-like was more essential than ever.

The blood dried on her fingertips as she balled her hands tight and raced through yet another alley in the shadow of a barber’s and a meat pie shop. Throughout all of London, the shadows marched at night, threatening to suffocate the weak, the foolish or the plain unlucky. She’d been all three in the past, yet had scraped through with her life.

Helps to have a technomancer for a sister.

The alleyway came to an end and she burst out onto the road. Once she stepped into view, a shout came from a few shops down, and the intense beams flashed their way from the hangman’s orbs—mechanisms that cast sunlight even in the dead of night. Blokes like them get equipped with all the knickknacks.

The three coppers had spotted her, and unless she found a hideaway to clean up in, the blood mucking up her blouse made her look as guilty as the governor. Ellie let out a whoop and threw a hand in the air as she surged forward, continuing the chase. If they wanted to target her, she’d run them ragged before making her escape.

At least, if lady luck didn’t abandon her tonight.

Clicks echoed from behind her, and a glance back rewarded her with the glow of aether in the modded pistols the coppers aimed her way. She couldn’t outrun a bullet.

To the right of her, the buildings stretched out, narrow alleys aplenty.

To the left of her, a few storefronts interspersed along the canal. 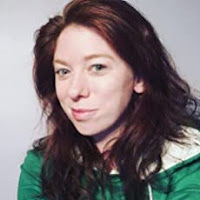 Strong women. Strong words.Katherine McIntyre is a feisty chick with a big attitude despite her short stature. She writes stories featuring snarky women, ragtag crews, and men with bad attitudes--high chance for a passionate speech thrown into the mix. As an eternal geek and tomboy who's always stepped to her own beat, she's made it her mission to write stories that represent the broad spectrum of people out there, from different cultures and races to all varieties of men and women. Easily distracted by cats and sugar. 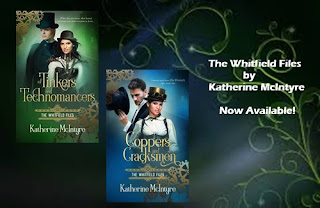