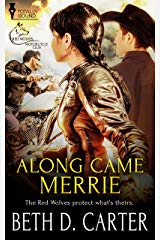 Book one in the Red Wolves Motorcycle Club series.
Merrie stumbles into a bad situation, forcing an outlaw motorcycle gang to ‘deal’ with her, but her escape leads her into the arms of two incredible men who change her life forever.


Merrie Walden is in the wrong place at the wrong time. When she sees something she shouldn’t, she’s attacked by a vicious outlaw biker bent on shutting her up—permanently. She escapes him by jumping out of a moving car. Luckily, horse rancher Braden McClintock finds her and takes her for medical attention to his adopted brother, Leo Cloud Dancer.
As she heals in the men’s home, Merrie realizes that she’s falling for both men. Braden is taciturn, while Leo is outgoing—both reaching a deep-seated need in Merrie that she never knew she had.
However, the outlaw biker has discovered her hideout and even if she doesn’t know what she witnessed, he sure as hell does—and he wants her silenced. Will Merrie have a chance to have a happily ever after with Braden and Leo? 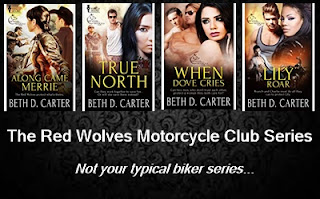