A Paranormal Love Triangle from Samuel King! (up for Pre-order!)


Alfie escapes to the Devon countryside, but his new home has a mystical past and he is soon caught up in a love triangle that takes him beyond the world he knows. 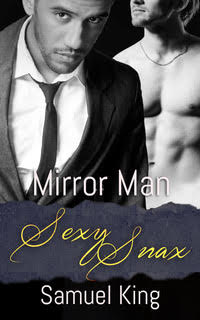 When Alfie moves to a Victorian cottage in the wilds of the Devon countryside, he’s looking for a fresh start and some solitude. However, soon after moving into his new home, he begins to have vivid dreams about a stunningly handsome stranger, who appears to be trapped inside an antique mirror that hangs on the wall in the living room.


To add to his confusion, Alfie is also visited by his young landlord, who seems to know more about the man in the mirror than he wants to reveal.
Alfie finds himself torn between two men, one who seems like perfect boyfriend material, the other a mystical force of nature, desperate to be freed from his magical prison.
Reader advisory: This book contains a scene of public sex and allusions to sexual assault.
General Release Date: 17th December 2019

It’s set in the contemporary real world, although one highly influenced by the Hammer  and Amicus horror films of the 1970s – a creepy Victorian cottage in the middle of a wood.

It features a mirror and a ghostly apparition, but the ghost is actually the displaced astral body of an evil man and the mirror is a mystical portal to a distant realm of the astral plane from which he can’t escape.


3)    What is your favorite type of Paranormal story to read?

I love a spooky ghost story, but its always good when the author puts their own twist on it. I enjoy Adam Neville as a horror writer. He has a way of taking what has been done before but making it his own. There isn’t much in the way of romance in his books though. Rebecca by Daphne Du Maurier is one of my favourite books ever. Not strictly a ghost story, but it feels like one, as the main female protagonist is haunted by the memory of her new husband’s late wife.

No – although it has the potential to be


5)    Do you believe in the paranormal? If so, have you ever had a paranormal experience?

I haven’t personally, but my great uncle, who I was very close to, was a professional medium, so he told me many tales of visitations by spirit guides, and stories from seances he performed.

7)    Are you planning on writing more in the paranormal world?

I have an idea for a full-length mm romance set in an apartment building in London which is haunted. It’s still taking form, but I hope to have a first draft finished before the end of the year.

8)    What are your upcoming projects?

I just independently published a short mm romance called Sage the Immortal about a relationship between a 2,000 year-old demi-god and a human called Tim.