Book Two in the MckNight, Perth and Daire Series! 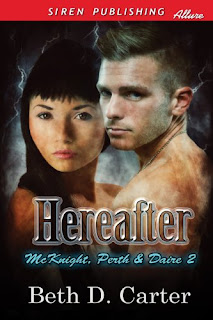 Charlotte Perth has been sent to Missouri to find the bodies of three missing women, and she’s dragging her new injured boyfriend, Jonas Daire, along for the ride. Only when she arrives in Rock Ridge does she realize that Agent Nash McKnight has been hired to protect her, and his nearness is driving her absolutely crazy.

As if having to deal with a wacky Southern belle who’s channeling more than the dearly departed, the local sheriff who’s convinced she’s the murderer, and an underground sex club wasn’t challenging enough. Now she’s got to worry about her unwanted attraction to Nash as they go undercover to ferret out a killer.

Charlotte doesn’t want to betray Jonas, but she’s not quite sure how to squash her feelings for Nash. And just when she thought she might have it all figured out, a secret she uncovers is enough to put her on the murderer’s high-priority list.

I wanted to write a series to honor one of my favorite TV shows, Ghost Whisperer. Well, until the season where Jim dies and takes over another man's body. That was just too whack and made me angry the writers went there. Dudes! If you're going to write a great tv married couple who love each other do NOT kill off the husband!

I came up with Charlotte Perth. Sassy. Loves designer shoes, but doesn't like their prices so she buys knock-offs. And she has a series problem with water. To the point that she won't stay in a hotel room with a bathtub. Why?...she once drowned, and it left her with aquaphobia. This horrible incident in her past might have left unable to take a swim, but it gave her the ability to communicate with the dead. And not just any dead. She sees only those who have been murdered.

In book one, Otherworldly, I set up Charlotte's life as she travels around helping people. Her only confidant is her sister, Holly, and Holly's husband, Alastair. Al is the head of an FBI-type agency called Hawke Securities who are for the private sector, although they have very real authoritative privileges. Fearing for her sister's life, Holly sends HS Agent Nash McKnight to keep her safe, but he and Charlotte have a history and since she has a boyfriend, well, sparks really do fly. Just...maybe not the right kind.

I tried to put as much humor and sass as I could into this book. In book three, Breathless (which is showcased next Tuesday), I introduce all of Charlotte's kooky sisters as she goes back home to find the killer that has struck again.