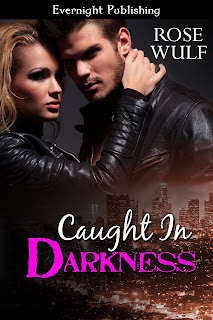 Veronica Wyndham had no idea that vampires were real, let alone that her new favorite customer—Tall Dark and Handsome—just so happened to be one. And she never imagined she’d overhear a robbery plan with murderous potential while eating lunch in the park. Making those kinds of enemies just wasn’t a good way to spend a day.

Seth Hunter knew he should have been grateful for Veronica’s unintentional help in exposing the traitors, but all he could worry about was how much danger she’d just landed in. Instinct had him taking it upon himself to keep a protective eye on her, but even then he had to keep his distance. If she found out the truth about the world around her, she would surely get Caught in Darkness.

My novel, Caught in Darkness (Night Shadows 1), is set in a world a lot like ours. There’s just one noteworthy difference—vampires, werewolves, witches, and people called Slayers are real. The supernatural element lives in the shadows, mostly, but is spread out all over.


Caught in Darkness focuses on a vampire Family in Baltimore and a human woman who stumbles into their world without even knowing it!

My vampires do not sparkle! But they don’t catch flame in the sun, either. Technically, they can walk in it, but not without consequence. So most of my vampires dress in long sleeves and layers and wear sunglasses. Being caught in the sun drains their energy, and burns them in a similar way ordinary humans get burned if they touch something hot for too long. They’re still susceptible to things like stakes to the heart and decapitation, because really-die somehow, and of course they’re dependent on blood. I should specify, non-werewolf blood.


The vampire society in my Night Shadows series functions as a sort of nation unto itself, hidden from sight of the rest of the world. Though there are Families scattered all over, like the one in Baltimore that is explored in Caught in Darkness, those Families are themselves all subservient to the First Family. The First Family is ruled by the Vampire Queen, the oldest remaining Original. She sets the laws for all vampires.


Slayers are also relevant in Caught in Darkness, and it’s important to know they’re more than just “people who hunt monsters.” True Slayers, with the capital “s,” are a unique type of evolved human with the ability to sense the presence of werewolves and vampires. Most Slayers, as long as they have a little training or their heritage is strong enough, can tell which species they’re sensing long before they lay eyes on their target. They can also use this ability to track the creature, to an extent. In addition to their sixth sense, Slayers have faster-than-normal reflexes and heal quickly from most injuries. This doesn’t make them immortal, or immune to vampire bites, but it gives them a chance of winning in a fight against something stronger and faster than the ordinary human.

Oh, gosh! I think ultimately I’m torn between vampire and werewolf, which is why I included both simultaneously in my Night Shadows series.


I love the sexy mystery that so often shrouds a good vampire love story. But I also love the fiercer, protective nature of an Alpha wolf. Both are a little cliché, but easily draw me in and bring a smile to my face!

Yes! Caught in Darkness is Book One of my Night Shadows series. Currently there are four books available in the series, and I am working on the fifth!

Indeed I do believe. I mean, I’m not sure I believe in *vampires and werewolves* but I believe in the paranormal itself. And since you already asked, I’ll share a bit about why (really, it’s all my friend’s fault)!


Put simply, my best friend (who shall remain nameless) grew up in a haunted house.


I visited her many times during our youth, of course, and witnessed several belief-inspiring things. Pictures falling off of walls and flying across rooms, for instance. A self-starting vacuum (that was not *supposed* to be a self-starting vacuum, let me be clear! It wasn’t even plugged in). The radio/stereo system in her room would spontaneously turn on and off sometimes as well.


A personal favorite was watching as a childhood tiara that was on display on a bookcase, on the second story landing, suddenly lifted and flew halfway across the house (landing downstairs)!


These are examples of instances I witnessed myself. I’ve heard many more stories from her regarding her house!

Does ‘the existence of the city of Baltimore’ count? Because aside from that, I’d have to say no!

Honestly, I wrote and re-wrote this story several times, so my answer is both ‘yes’ and ‘definitely no, it’s perfect!’ It took me a long time to get it the way it is, and I am very happy with the final product.


Did it change a lot during the rewrites? Absolutely. One version was a short story for a writing class, if I remember right! But this was the first version I was happy enough with to submit for publishing. So while there are a couple of scenes I still remember from one of the old versions, I wouldn’t try to re-insert them even if I had the opportunity.


8)      Are you planning on writing more in the paranormal world?

Of course! The majority of everything I write is paranormal. In fact, I tend to just describe myself as a paranormal romance author and not bother with, “well, except for that one book…”


So while, every now and then, I will dabble in contemporary, the paranormal world had best get used to me. I’m not going anywhere!

Thank you for asking!


I’m currently working on Night Shadows 5 (which I’ve tentatively called Chosen by Blood, but I think that title will change). Without giving too much away, readers can expect to finally learn what goes on behind the scenes with the First Family. They met the Queen of Vampires, Trista, in Book 3 (Stayed for Alpha), but in Book 5 we get to really *see* her. She’s not the heroine, though. Spoiler Alert! Her daughter, the ‘Vampire Princess,’ is actually the star of the story! (Yes, I said “daughter.”)


Night Shadows 5 also sees the return of a few familiar faces from Caught in Darkness—and I’m not talking about a ‘shout out to the couple from Book One.’ But I won’t specify who. I don’t want to spoil the ending of Book One for anyone who hasn’t read it!


I intend to focus solely on this project from now until it’s completed, as I’m already past the halfway point. (Also I don’t like having multiple open projects. It’s hard on my muse.) Once Night Shadows 5 is completed and submitted, I may indulge in a standalone if the urge is there. Otherwise I’ll switch mental gears and begin work on the next book in my other ongoing series, Dark Light!