The Finale of the McKnight, Perth & Daire Series! 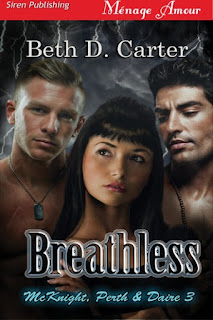 Leaving the troubling dilemma of loving two men behind, Charlotte Perth heads home to California. The last time she was there she'd just come back from the dead with the gift of being clairvoyant. Now, another young swimmer has drowned and Charlotte realizes it's another victim...one who might not have been if Charlotte had only told the truth twelve years earlier.

She doesn't count on Jonas Daire and Nash McKnight following her, ready to hammer out the details of being in a ménage relationship. Both love her so they're willing to share, as long as they don't kill each other.

Only now they have to convince stubborn Charlotte they can make the unusual relationship work. Before she can possibly think of the future, however, she's got a murder to solve while not falling victim twice to the same killer...one who's waited a very long time for Charlotte to come home.

So here it is! The end of the series!

I absolutely loved writing Charlotte and all her eccentricities, along with all the weirdness of her sisters. When I started this journey with her, I had this idea that it would be cool to have three books where we're introduced to the two men she loves and the third bringing them all together. As you would expect, I had to tread carefully around the whole "Isn't she just cheating, though?" That's why I didn't have her and Nash have sex in book two, although they came close.

So in this book, Charlotte gets disturbing news that the pool she had drowned in (had been murdered in) claimed another life. Now she's wracked with guilt because she never reported what had happened to her. So the only way to face justice is solve her own murder. I use that word because she was killed...but luckily, resuscitated.

Not only that, but she is running from the fact that she loves two men. Detective Jonas Daire and Agent Nash McKnight. Only she doesn't realize that they are well aware of the triangle their in and are working to give them all a happy-ever-after.

If you like ghosts, suspense, and hilarious one-liners, make sure to check out the McKnight, Perth & Daire series!