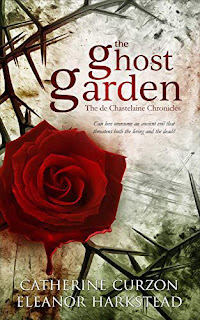 CC - It’s set in a quiet, rural corner of south-west England in the years after World War One. Though to the vast majority of the population stories of ghosts, vampires and devils are just legends, to Raf de Chastelaine, they’re his friends, foes or even family. When he isn’t working in his beloved garden, Raf is travelling the country dealing with all sorts of supernatural mischief in his own inimitable way.

EH - The Ghost Garden is set in a remote boys’ boarding school on the edge of Exmoor, where the ghosts of the past are trapped.

CC - Raf’s love of working outdoors may come as a surprise to readers when they find out more about his family and background. The Ghost Garden is a mystery in which the killers, victims and witnesses are all dead - but that doesn’t mean that they can’t still seek help or even face justice, in this world or the next.

EH - Cecily isn’t your usual feisty, badass, buttkicking paranormal heroine. She’s quiet and to many people appears meek. But beneath the surface, she’s a survivor with the ability to converse with the dead.


CC - I’m a big fan of early Gothic and I love the ghost stories of MR James, but my favourites are always the stories that might just be true.

EH - I’m a fan of MR James as well! I like to think there’s some of MR James’ atmosphere in The Ghost Garden and the books we have planned for this series. We’re both historians who like rummaging through old documents, just like James did. Aside from ghost stories, among the first novels I ever read as a child were Jill Murphy’s Worst Witch stories. I’d just moved to a school in a creepy old Gothic house and often felt like the hapless, awkward Mildred Hubble. Sadly, though, I was never taught how to ride a broomstick but I did have a tabby cat.

CC - Yes! It’s book one of The de Chastelaine Chronicles, which will follow Raf and Cecily on their adventures in the realms of the unexplained.

5)      Do you believe in the paranormal? If so, have you ever had a paranormal experience?


CC - I do and I’ve had a few experiences that couldn’t be explained. The earliest was when I was a very small girl and it left an indelible imprint on me.

EH - I’ve experienced lots of odd things in my time, so I’ll give you my greatest hits. Last year I was prodded on the shoulder in an empty cell in a historic prison. Then, when I was a teenager, my friend’s house was rather active, shall we say, and I still wonder if she had a poltergeist. About a year later, I moved into an old house and I often heard people on the stairs when there was no one around. One day a little girl dressed in clothing from the early 1900s ran past me. She was glowing and transparent! It turned out that around the same time, my stepsister kept hearing a little girl crying at night. Other people live there now and I wonder if they’ve met the little girl too.

CC - Lots and lots. From the period detail of the world we’ve created to the stories Raf tells Cecily of his experiences in wartime, it’s a world that’s steeped in reality and history.

EH - One of the characters is based on Hanging Judge Jeffreys, who is remembered for sending nearly 200 people to the gallows after an uprising in 1685. He embodies the figure of unyielding, merciless power, which is terrifying whether it’s perpetrated by the living or the dead.


CC - None so far, but we have lots of inspiration for the forthcoming books in the series.

EH - When we sat down to write The Ghost Garden, it flowed so well that we didn’t need to delete anything. That’s not to say we never delete any scenes from our stories

8)      Are you planning on writing more in the paranormal world?

CC - Of course! And we’ve already dipped into paranormal with our short story of a phantom rogue and a ghostly dandy trying to do a bit of matchmaking, The Captain’s Ghostly Gamble.

EH - We do rather like the paranormal. There’s so many creatures and tropes, and it’s fun to do something quite traditional with them and alternatively it’s fun to turn them upside down!

CC - We have lots of exciting projects in the future, including new books in The Captivating Captains series and a couple of super saucy romantic suspense MF books, so we’re very excited for what’s on the way!


Within the tangled vines of a forgotten garden, can a blossoming new love overcome an ancient evil that threatens both the living and the dead?

After losing her brother in the trenches of the Great War, Cecily James is a prisoner of Whitmore Hall, the respected but remote boys’ school where her brutish husband reigns as headmaster. With its forsaken walled garden, a hauntingly tragic past, and midnight footsteps heard from an unoccupied clocktower, Whitmore Hall is a place where the dead are rumored to walk.

Whitmore Hall is filled with mysteries and as a ghost garden emerges from the sun-bleached soil, long-buried secrets cry out to be told.

When new teacher Raf de Chastelaine blunders into an impromptu seance, Cecily finds an unlikely and eccentric ally. In a world of discipline and respectability, barefoot Raf is unlike any teacher Cecily has ever met. With his tales of the Carpathian mountains and a love of midnight gardening, he shakes Whitmore Hall to its foundations. Could there be more to Raf than meets the eye? And as he and Cecily realise that their feelings run deeper than friendship, dare they dream of a world beyond Whitmore Hall?

As Cecily and Raf team up to unite long-dead lovers and do battle with an ancient evil that has long haunted Whitmore Hall, Cecily finds her chance of happiness threatened by her tyrannical husband. But is the controlling headmaster acting of his own free will, or is he the puppet of a malevolent power from beyond the grave?
Posted by Beth D. Carter at 1:00 AM