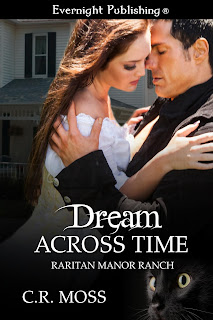 1)      Tell us about the world your novel set in
It’s set in today’s world but deals with a ghost, a familiar in the form of a black cat, and body transference.


2)      What makes your world/character different from other books in the same genre?
It’s a mix of existing in the current time, time travel, and a dream world. Plus, people think the cat can talk to them.


3)      Is this book part of a series?
Yes. It’s the first of three books in the Raritan Manor Ranch series. The other two are Journey Across Time and A Wish Across Time.


4)      Do you believe in the paranormal? If so, have you ever had a paranormal experience?

Yes, I do believe in the paranormal. I’ve also had experiences and was with someone when we both experienced the same thing (seeing a ghost), so I know I wasn’t going crazy. ;) I’m also a bit psychic—empathic, clairaudient, and clairsentient for the most part—and have been able to sense when deaths are going to occur. Fun, eh?


5)      Are you planning on writing more in the paranormal world?
Most definitely. See my answer in the next question. :)


6)      What are your upcoming projects?
I’ve had the rights of several books reverted to me, some of which already had a paranormal slant to them (ghosts/time travel) and some other which I’m going to convert into paranormal stories. They’re all going to be taking place on a “new” ranch, based off the location I had the paranormal experience in I mentioned above. Not sure exactly when they’ll be done and available but keep posted to my blog for details! 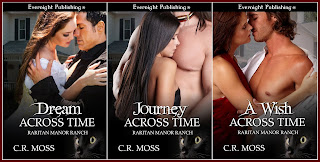 Dream Across Time by C.R. Moss


A woman in love. A ghost in need. A man possessed.


Evelyn Sheridan is in love with Raritan Manor Ranch’s resident ghost, Quinn, but can only experience his embrace in her dreams.


Quinn VanAlder, who doesn’t realize he’s a ghost, loves Eve and wishes she’d stop saying they can’t be together.


While at the ranch, Alex VanAlder arrives for a visit, and Evelyn’s hopes rise. Perhaps she will be able to have a real relationship after all. Alex, though, has no interest in Evelyn. Yet, every time the house cat, Myrddin, comes around, Alex feels like a man possessed and wants Eve with a passion.


Caught between loving a ghost and putting up with a man who can’t make up his mind, Evelyn is at a loss.


Can the magic of the ranch help Evelyn to stop being caught between two worlds?


He stood an inch before her. She breathed in his musky, masculine scent. Her clothes tightened and scratched against her sensitive skin. Though under a warm sun, a shiver raked her body. How could a man rob her of control, of her senses?


Quinn placed his hands on the building, trapping her between his arms. “Tell me,” his husky voice whispered in her ear. “What has gotten you so bothered you think you are going crazy?”


The heat radiating between their close bodies sent ripples of desire through her. She shuddered.


“You,” she whispered in return, not meeting his gaze. “These dreams. They’re interrupting my life. I’m letting my relationship with you interfere with everything I do when I’m awake. Any good psychiatrist would have a field day with me.” Evelyn paused, took a deep breath to calm her excited body.


Since he towered over her by at least a foot, she talked to his chest. The white shirt, pulled taut over his front, showed the outlines of his well-defined muscles. She wanted to touch them. Evelyn clenched her fists at her sides, taking in another deep breath, and looked up. “It’s gotten to the point where Julie thinks I’m in love—”


“Are you?” Quinn interrupted, a hint of pleading tainted his voice.


His question caught her off guard. She hadn’t thought about the possibility of love, of discussing their feelings for each other. She didn’t answer, and her lack of response brought an expression of sadness to Quinn’s features. She cared for him, but love? How could she love someone who wasn’t real, someone who existed before her birth? Someone who’s a ghost?


Quinn turned his back to her. “I thought… never mind.”


The misery in his voice pinged at her soul. “Quinn.” She put a hand on his shoulder to halt him from leaving. “I’m sorry. I can’t love you. You’re not real.”


His body tensed beneath her fingers. Quinn turned back to her and her hand fell to his chest. He held it there. “Damn it, Evelyn. Stop talking nonsense. I am real.”


She couldn’t deny that fact. His hands were warm. His heart beat strong and steady. Her eyes widened and she gazed up into his passion-filled gaze. She wished she wasn’t dreaming.


“Let me show you how real I am.” His lips descended onto hers. 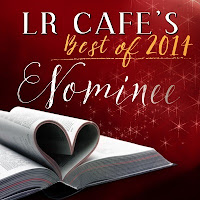 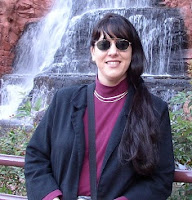