First Book in the My Boyfriend Is...Series by Elizabeth Monvey! 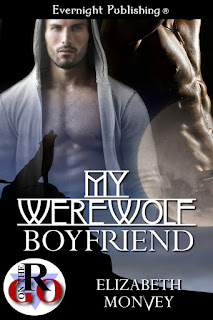 My Werewolf Boyfriend is a stand-alone story with a HEA, set in a series of supernatural stories featuring men who will do anything to save or help the man they love. In this book, Aaron and Tony are in a relationship and everything is going wonderful…except Tony leaves once a month and shuts Aaron out. When he follows Tony, he learns about the werewolf world.


2)      What is your favorite type of Paranormal story to read?

It doesn’t really matter as long as it’s good writing with a HEA.

4)      Do you believe in the paranormal? If so, have you ever had a paranormal experience?

Yes! Along with seeing a UFO (which is recorded with MUFON), I lived in a haunted house. I do believe there is a world beyond our senses, whether that is parallel worlds or other dimensions…I guess I won’t know for sure until I cross over the veil.

5)      Are you planning on writing more in the paranormal world?

Yes. I’m currently working on a project with Jacey Holbrand, the Project Mars series. It has two books published and we have another two planned. I’m afraid I’m the weak link in the writing. I have a day job that prevents me from writing a lot.


Like I mentioned earlier, I have another book in the My Boyfriend Is… series, titled My Incubus Boyfriend, coming out hopefully before the end of the year. I have a few more planned for 2020. I’m also working on the Project Mars Series. After they are all written, well, I’ll consult my muse.

Blurb
Aaron and Tony’s relationship is going strong after almost a year, except for once a month when Tony has to return home to check on his uncle. Aaron feels slighted because he’s never included, so he decides to take matters into his own hands and follow Tony.
Tony Lykes can’t tell the love of his life that he’s descended from a long line of werewolves. But when Aaron shows up in the middle of a werewolf battle, he’s sentenced to death in an effort to keep the werewolf pack a secret.
Now Tony, who is an enforcer of his pack, has to make the decision of upholding the werewolf law or defying protocol and customs to turn his very human mate.